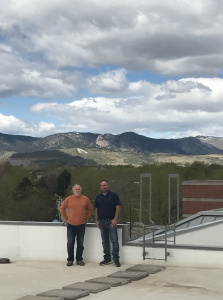 When the roof at a rehabilitation center in Colorado was reaching the end of its service life, roofing contractor Bill Steeves recognized it was the perfect candidate for roof restoration project. Steeves is the president of Skyline Roof Restoration Inc., based in Frederick, Colo. The company specializes in roof coatings. It was launched last year by Steeves and his partner, Steve Broda. Broda is the founder of Skyline Roofing Inc., a full-service commercial roof contracting firm, also located in Frederick, where both men have worked since 2006.

“We formed Skyline Roof Restoration as a vehicle to promote restoring roofs with coatings,” Steeves says. “We have both been involved with various coating projects in the past and wanted to offer our expertise to clients where restoration is their most prudent option.”

In the Denver area, the coatings market is booming in part due to changes in local energy codes, notes Broda. Several municipalities have mandated with that a roof tear-off and replacement, the R-values in the roof have to be brought up to those for new construction. “It was becoming unaffordable for some people to do total roof replacement and upgrade to R-30 or R-38,” Broda says. “We needed another tool to provide them with a roofing option that was economical and did not force them to add the extra R-value to their roof systems.”

In many cases, coating an existing membrane roof can be an excellent option. “It can save the customers a lot of money compared to a roof replacement, and depending on the system and the thickness, we can offer a 20-year NDL warranty,” Broda notes. 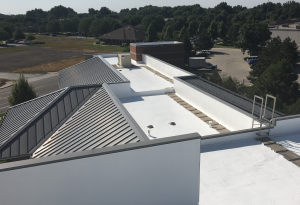 According to Steeves and Broda, the key to the success of a roof restoration is making sure the underlying substrate is a good candidate for the coating. Skyline Roof Restoration will only authorize a coating project if it is the best option for the facility. “Steve and I have a combined 77 years of experience in commercial roofing, and there are very few scenarios we have not run across,” Steeves says. “We have both built very strong commercial companies based on return customers and referrals. We both really care about the final product, value to our customers, and the relationships we have developed over the years.” 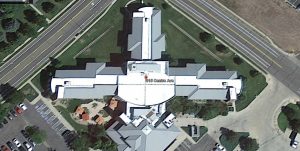 This aerial photo shows the Centre Avenue Heath & Rehab roof after the restoration process was completed.

Steeves suggested it was time to conduct a roof inspection at Centre Avenue but was told to wait. Sure enough, the next time it rained, a leak was detected. When Steeves met his repair crew on the site, he noticed that the fully adhered EPDM roof system on the flat roof sections was just beginning to exhibit signs of oxidation. A few stress fractures were visible in the membrane. “It was a perfect candidate for a roof restoration,” he says.

In a meeting with the owner, Steeves suggested the application of a high-solids silicone restoration system from GE Momentive. “I explained that the restoration process would, in effect, freeze the aging process of the EPDM by protecting it from further UV degradation,” Steeves says. “I had also, prior to our meeting, completed some research and found out that the local power company was offering a rebate for any Energy Star-qualified roof covering, which further reduced his total capital outlay.”

When Steeves detailed the costs involved with the coating project as opposed to a tear-off and replacement, the owner gave him the go ahead on the roof restoration plan and opted for a 15-year NDL warranty.

Broda and Steeves note that there are cases in which the existing roof is too far degraded to work well with a coating, and in those cases, the only viable option is a roof replacement. The silicone coating can be used on membranes including EPDM, TPO, PVC, modified bitumen and smooth built-up roofs, as well as metal. “It works with all types of membranes, but you have to catch these roofs before the end of their serviceable life,” says Broda. “They have to have some life left in them to coat them. If we are not comfortable putting a coating on a roof, we won’t do it.”

Often all that is needed is minor repair of wall flashings, curb flashings and penetrations. Wet insulation is another problem to look out for. “We’ll do an infrared scan of the roof before we coat it to make sure we don’t have any wet insulation in there.”

Every proposal is also contingent on a successful adhesion test. A sample area is set up and a pullout test is conducted to determine if the product will adhere well.