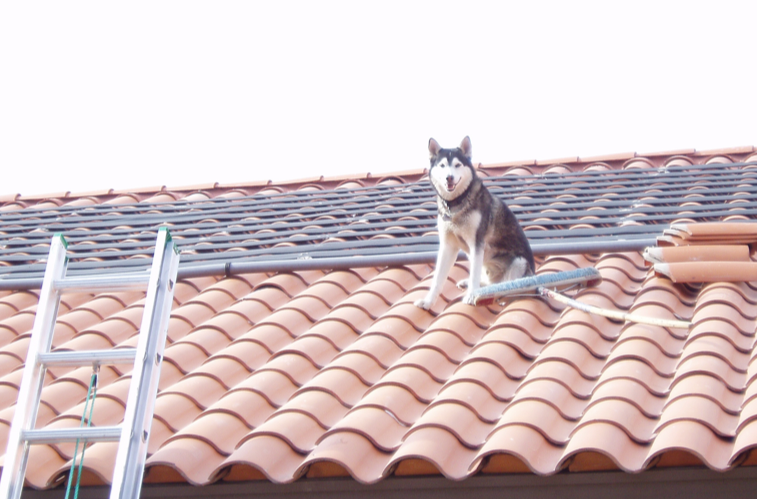 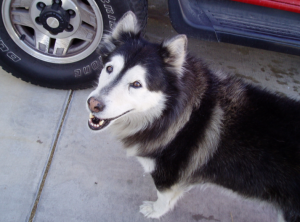 James Guindon and his husky, Roofis, moved to Las Vegas from Palm Springs, Calif., in 1994 for the construction boom. Guindon was accustomed to bringing Roofis—who actually climbed ladders to join crews on the roof—to work, but he met some resistance from Las Vegas roofing contractors when he sought a job. “Some companies wouldn’t hire me because of Roofis, saying there were insurance reasons or they can’t bring their kids to work so I should play with my dog at home,” Guindon remembers. “I finally was hired by a company that only cared that I showed up and was a good roofer, and some of their customers thought Roofis on a roof was the cutest thing they ever saw.” Those customers called the local media outlets and suddenly Roofis was famous.

In 1997, Guindon established Roof It Right, which has five human employees and focuses 70 percent of its efforts on residential projects. Naturally, Guindon made Roofis the star of the company. Roofing spoke with Guindon about Roofis (who passed away in 2006) and Roofis’ son, Bullet, who has taken over as Roof It Right’s resident roofing dog.

Roofing: How did Roofis and Bullet become comfortable with ladders and on roofs?

Guindon: Roofis would follow me around wherever I would go. When he was 4-months old, I went up on my house’s roof and he climbed up the ladder behind me. 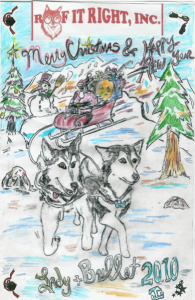 Roof It Right’s owner James Guindon, who is also an artist, includes his dogs in marketing materials, like this Christmas card he illustrated.

I took Bullet to a job site when he was a puppy. We tried to get him to follow Roofis up the ladder but he wouldn’t do it. I kept bringing Bullet to job sites anyway. One day, I went up on a roof and I heard a dog coming up the ladder. I assumed it was Roofis but it was Bullet. Six months later, Roofis died. The day after Roofis died, Bullet filled Roofis’ “shoes”.

Roofing: How do you keep Bullet away from dangerous situations?

Guindon: I have been careful of what roofs I let him onto. If I think Bullet’s going to get hurt, I won’t let him up. We did a job on a 3-story building recently and Bullet was climbing up the 32-foot ladder to get to us. If the ladder is straight up and down, I won’t let him go up because he can fall backward.

Roofing: Do you use your dog(s) in your marketing materials?

Guindon: I’m an artist, so I created our logo with Roofis in it. The last three or four years, I’ve included Bullet on the custom Christmas cards I create and send to my clients. Both dogs are on the company website. My TV commercials include Bullet. My answering machine’s outgoing message starts out with ‘woof woof’. I’m having some fun with it.

Also, when people drive by and see a dog on the roof it’s definitely a headturner. They often stop and ask how the dog got up there. It blows their minds when they see him climb the ladder. 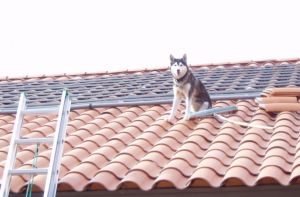 Roofing: Do you get jobs specifically because of Bullet?

Guindon: I get calls from animal lovers. They don’t usually tell me they’re going to hire me right away because they’re afraid about how I might price the job. I’ve also been in business for 17 years, so I’m established around here, but I have to admit some of my business is probably because of the dogs.

Roofing: Do you plan to continue using dogs in your business?

Guindon: I got Roofis’ sperm frozen so when Bullet, who is 9 years old, goes to doggie heaven I’ll probably get one more roofing dog and after that I’m going to retire. Then I’ll have hunting dogs instead of roofing dogs.