Buildings in the Migration Period

The retreat of the Romans in the third century due to the attacks of the nomadic populations—Getaes, Germans, Huns and Avars, various Slavs, Turksans (such as the Pecenegians, the Cumanians and Bulgars), Hungarians—led to the desertion of these fortresses and to a change of the lifestyle of the population that continued to live in this area.

One of the most important monuments is the stone church of Densuș, the oldest stone church of Romania. Situated close to the Dacic fortresses and built in the eighth century (or, according to other authors, in the 10th century) using as building materials the stone from the ancient fortresses. The roof is made of stone plates. (See Photo 2.)

People who lived outside the fortresses made sure their homes were well hidden, so that the invaders could not see them while riding whip and spur. Dwellings were therefore buried in the ground, with thick thatched roofs that could easily be concealed in the landscape. (See Photo 3.)

Today the principles according to which these houses were built are back in fashion: thermal loss is reduced as the houses are underground, and the thick thatched roof provide very good thermal performance. (See Photo 4.) A thousand years ago, they represented an affordable means of defense for the peasants in front of migrating warrior populations. 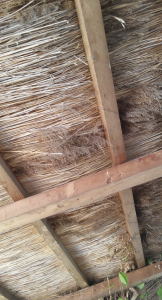 Photo 4. A view of the underside of a thatch roof. Village Museum in Bucharest. Photo: Ana-Maria Dabija.

From the Middle Ages to the 19th Century

Romania is a country with forests, therefore wooden structures were always used for buildings. Wood shingles cover the houses, churches, and inns throughout the whole country. Pitched roofs provide a rapid drainage in the geographic areas where rain and snow are common.

Easy to manufacture, easy to install, easy to replace, the wooden shingles were a cheap and effective roofing system. The wood was cut with the poleaxe, through the length of the fiber, thus obtaining long shingles over which water flowed. Wood was cut in winter in the nights with a crescent moon, so that the sap would be scarce, or during a full moon when the sap is equally distributed and the wood would not be exposed to molds and rot. Sometimes shingles were boiled in oil to increase the protection against water penetration. 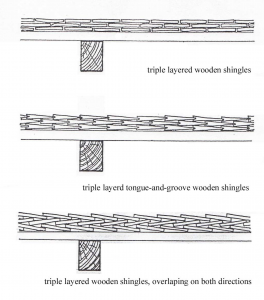 The shingles were sometimes shaped to provide a tongue-and-groove attachment—and a better sealing of the roof surface. Sometimes the artisans overlapped the shingles in both directions, horizontally and vertically, thus preventing water from penetrating behind the shingles. (See Image 5.)

For dwellings, the wood shingles would be set with a triple head lap, shifted by one-third in both directions to ensure that the water pushed by the wind against the roof would not get beyond the shingles and into the interior space. When the loft or attic was not used for a definite function, two shifted layers were considered enough, as the penetrating water dried out eventually. (See Photo 6.) 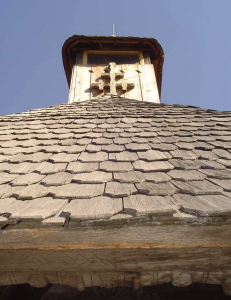