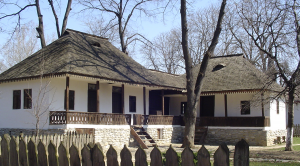 In Walachia, Moldova and the Northern county of Maramureș, the edges of the roof slopes are rounded (Photo 7), while in Transylvania they are straight (Photo 8). It is a matter of tradition, but it is more difficult to accomplish the fan-like distribution while ensuring a good protection against water leakage. 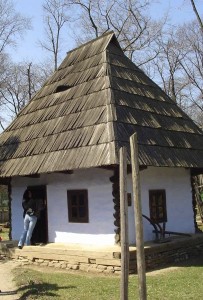 A very interesting solution is the use of wooden shingles made of fir tree, fixed on the laths with wooden nails made of yew. The two types of wood have different densities, so that they react differently to the environmental agents and therefore water does not penetrate behind the shingles. (See Photo 9.) 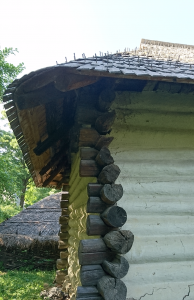 Photo 9. This building in Moldova is covered with wooden shingles made of fir, affixed with wooden nails made of yew. Village Museum in Bucharest. Photo Ana-Maria Dabija. 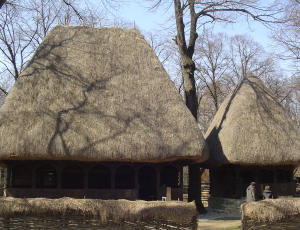 Straws and thatch are also abundant; therefore, traditionally they were used as roofing materials in the northern part of Romania, in Maramureș (Photo 10) as well as in the South, in the Danube Delta (Photo 11). The thickness of the assembly—from 12 to 16 inches—provides not only protection against water leakage but also the thermal insulation of the space beneath the roof. 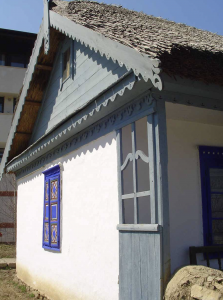 Speaking about Maramureș, few people know that the county holds a record in construction technology: the world’s highest wooden churches. Included in the UNESCO patrimony, the church in Surdești was built in the 18th century. (See Photo 12.) On a stone base, with evergreen oak girders and wooden shingles, it is 236 feet high, with the spire measuring 177 feet. Currently the world record is held by a new wooden church, 246 feet high, in Săpânța, only a few miles away. 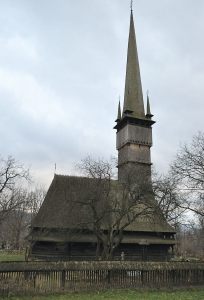 The monasteries of Moldova are also included in the UNESCO patrimony. Built between the second half of the 15th century and through the 16th century, they are famous for their painted exterior walls. 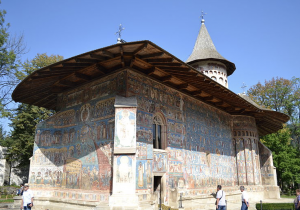 Photo 13. The Voroneț Monastery in Moldova has a wooden roof with eaves extended to protect the frescoes on its exterior walls. Photo: Rolly00, Creative Commons Attribution.

The Voroneț monastery, built in 1488, is also known as the Eastern Sistine Chapel (although of course the frescoes in the chapel in Rome are on the interior). The 9-foot wooden eaves protected the exterior frescoes through the centuries (Photos 13 and 14). Wooden shingles cover the roof, with mild, rounded, fan-shaped edges. 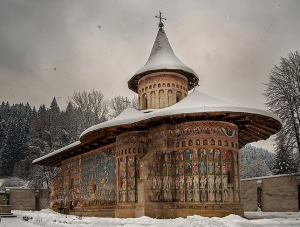