Clay is also a common building material. There are several types of roof tiles that are spread throughout the whole territory of Romania.

On the low slopes of the dwellings in Dobrogea, by the sea, a special system of tiles is specific: the barrel tiles. The principle implies a pair of elements: the “scoop” and the “lid.”

The geometry of these tiles is of a truncated cone, giving them the possibility to fit one to another and due to the friction of the two, they stay put.

Friction between the tiles and the supporting system (a flat surface of wooden planks) is also the principle of the roof assembly. This is the reason why the slopes of these roofs must be low; otherwise gravity can pull the whole clay covering off. 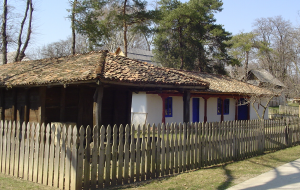 Low slopes are familiar in parts of the country with less snow and rain, so Dobrogea, a county with milder climate, is fit for the use of these ceramic tiles with this specific installation. (See Photo 15.)

Similar barrel tiles are used in the Balkans to cover the domes of the orthodox churches. They need a continuous surface to be placed on and, due to the shape of the dome, the tiles are “stitched” with wires and fixed with nails onto the supporting surface, usually made of wood. In order to prevent the stagnation of water on the low slopes, a foil protects the wooden surface. This measure is not necessary in the case of the dome roofing.

One of the characteristic of these historic churches is the fact that they are small: genuine architectural jewels, the principle behind the buildings being that God is close to us and His house is at the human scale. (See Photo 16.) 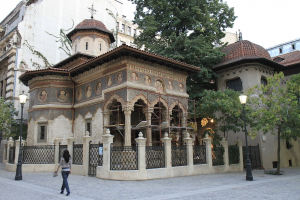 Fish scale roof tiles can be seen in most of the zones of the country where rain and snow are abundant. They represent a solution with a longer life-span than the wood or thatched roofs, providing a different architectural aspect. The clay tile solution is a more expensive roofing system, and it appears on the roofs of the castles, including the Bran Castle, at the gates of Transylvania.

A few words about Bran: it is one of the most visited castles in Romania, as it is attributed to Dracula. However, the historic character Prince Vlad the Impaler never lived here; his citadels were in Bucharest and Târgoviște, with the famous (for us) Tower of the Sunset. (See Photo 17.) 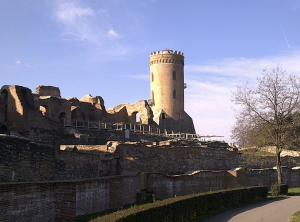 From the Hutchinson Files, Online Exclusives

Roofing in Romania, Part II: Past as Prologue