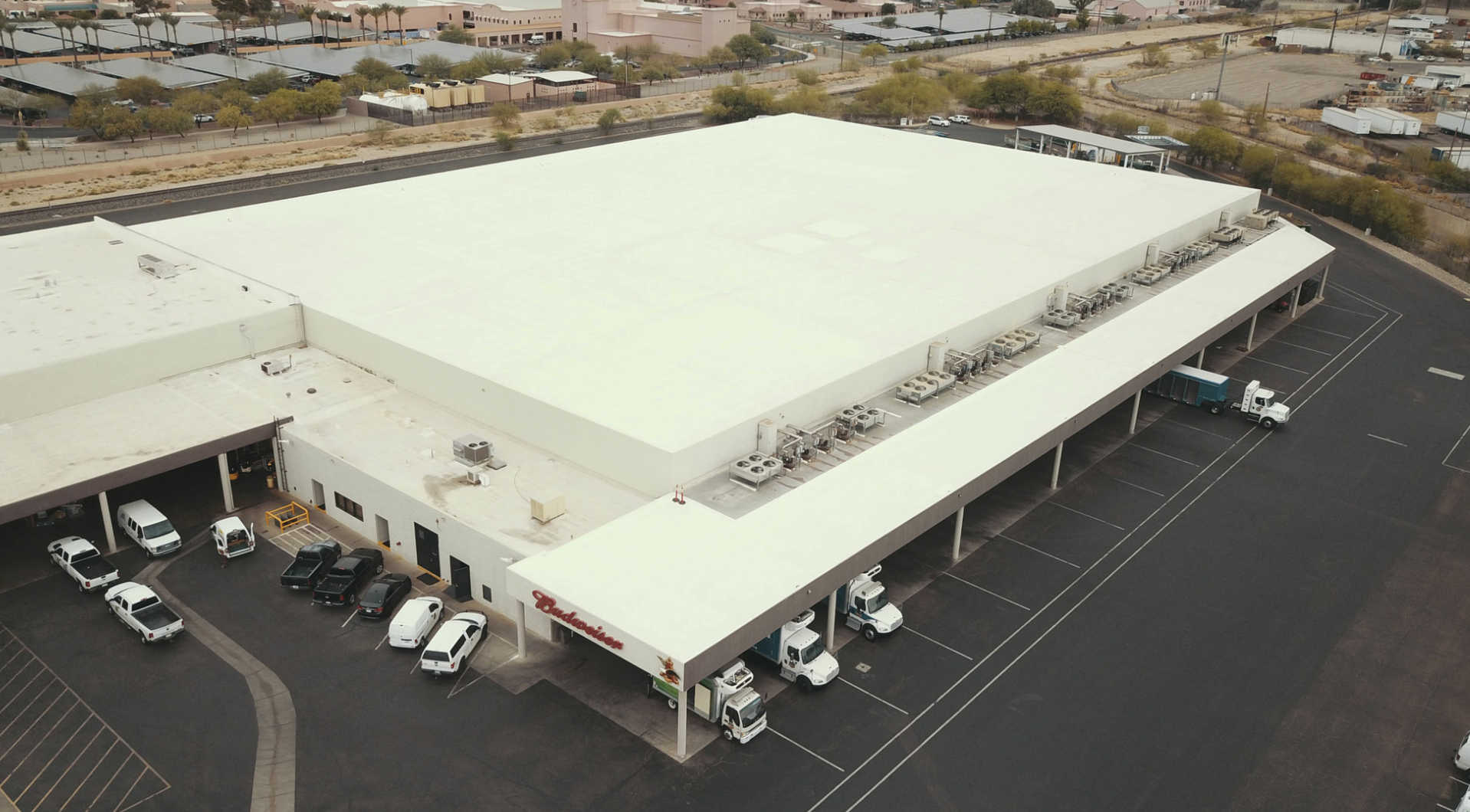 When the original built-up roof on Hensley Beverage Company's Tucson warehouse was failing, it was topped with a sprayed-in-place polyurethane foam roof system and an acrylic elastomeric protective coating. Photos: Rain Man Roofing 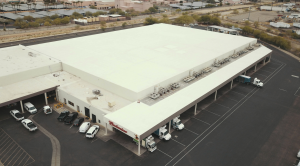 When the original built-up roof on Hensley Beverage Company’s Tucson warehouse was failing, it was topped with a sprayed-in-place polyurethane foam roof system and an acrylic elastomeric protective coating. Photos: Rain Man Roofing

What do Landshark Lager, Stella Artois, 3 Amigos Tequila, Nesquik, and Sunny Delight have in common? All are products distributed by Arizona-based Hensley Beverage Company. And all are favorites of Rain Man Roofing, the contractor that repaired a 100,000-square-foot warehouse roof at Hensley’s Tucson location.

Hensley Beverage Company began in 1955 when Jim Hensley, starting with just 15 employees, delivered 73,000 cases of ice-cold Anheuser-Busch beer to thirsty Phoenix residents. Fast-forward to 2018 and Hensley is among the largest family-owned and -operated beverage distribution firms in the United States.

Today, under the leadership of CEO Robert Delgado, President Andrew McCain and Chairman of the Board Cindy McCain, Hensley Beverage Company is a 30-million-case wholesaler. Cindy McCain is the daughter of company founder Jim Hensley and wife of U.S. Sen. John McCain (R-Arizona). Andrew McCain is the senator’s son from a previous marriage.

The company operates a service fleet of more than 1,100 delivery vehicles and employs more than 1,200 people. Delivery now extends beyond Phoenix into every corner of Arizona. Trucks regularly deliver over 2,500 different beverages to thirsty desert dwellers, including domestic, imported, and craft beers, spirits, wine and non-alcoholic beverages of all sorts.

Beverages like these have to be refrigerated in a climate-controlled distribution warehouse while they are being stored. Some kegs need to be stored at 34 to 38 degrees Fahrenheit. Other products can get by at higher temperatures ranging from 45 to 60 degrees.

But the warehouse can’t control the environment efficiently with a leaky roof. That’s where Rain Man Roofing owner Mark Hughes came in.

Rain Man Roofing, founded in 2010, is one of the highest rated roofing specialists in both Arizona and California. In 2011, Rain Man became a BBB Accredited Business with an A+ rating, which it has consistently maintained. With more than 25 years of experience in the roofing industry, Rain Man is well known for inspecting every roofing solution at both the beginning and end of a job — and providing detailed status reports throughout the entire process.

Rain Man to the Rescue

In early 2018, Hensley’s VP of Fleet and Facilities Anthony Keffer contacted Hughes about roof issues at Hensley’s Tucson facility. Hughes’ roofers had, in September 2017, successfully stopped a leaking roof at another Hensley building in Flagstaff with a simple and affordable restoration solution, so Keffer asked Hughes to take a look at the Tucson site. 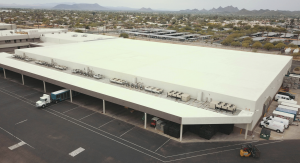 Several attempts to fix the roof in-house had failed to solve the problem. But Hughes and Rain Man, along with Erin Easter of Icynene-Lapolla, suggested a re-roof using a roof system of sprayed-in-place polyurethane foam and an acrylic elastomeric protective coating. Hensley accepted the proposal and work on the nearly 100,000-square-foot warehouse roof began.

By 2018, the laps in the roof’s membrane no longer functioned properly and roof system failure became increasingly frequent. The lap failures, most likely caused by improper installation and deterioration from constant UV exposure, caused obvious openings in the membrane. Rain Man’s inspectors noticed these problems, as well as related failures in the expansion joints, and worked to come up with a viable solution.

Together, Hughes and Easter proposed installing a spray-in-place polyurethane foam roof system over the existing system. The proposal covers the north end of the building (the 100,000-square-foot portion of the roof), where the majority of the controlled environment warehouse (CEW) is located. Hensley’s budget required that the southern portion of the building be repaired later; this second stage was tentatively set for August 2018. 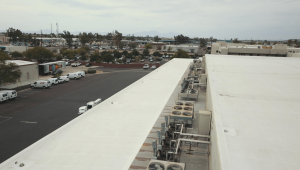 A 1-inch thick layer of polyurethane spray foam was applied over the entire existing roof system. The foam was also used to form flashings at penetrations. Photos: Rain Man Roofing

The answer to the lap problems was to broom and blow the roof, which entailed cleaning the roof of debris and smoothing out the plies to ensure contact with adhesives. Lapolla Thermo-Prime Acrylic Roof Primer was to be applied to the roof, followed by a 1-inch layer of spray polyurethane foam (FOAM-LOK™ LPA 2800-4G) on top of the primer. Finally, a double-pass application of acrylic elastomeric Thermo-Flex 750 coating would finish the job.

Scheduled to start in April 2018, work was expected to take three weeks to complete and would require two foam rigs and eight full-time roofers with Rain Man’s David Caballero as foreman. Hensley would provide the roofers with a covered staging area (normally used as a patio for side-loaded delivery vehicles), where the crew could store equipment and roofing materials.

The staging area would allow Rain Man to shield its supplies and equipment from the high winds and cold weather. Because the job took place in April, when cold temperatures are common in Tucson, the spray foam would be stored under the patio cover. The colder spray foam gets, the longer it takes to warm it up so it can be used effectively.

The finished product was designed to take advantage of the insulating properties of the original roof, and the new “cool roof” monolithic system overlaying the old one would add R-value to the warehouse. The lightweight concrete separator would be retained so the spray foam wouldn’t fill the low spots in the corrugated metal roof deck, which would be a waste of materials.

Rain Man Roofing began the project with a pre-job inspection to discuss the application process of the new roof, go over safety and logistical concerns and keep the team at Hensley in the loop. Hughes prides himself on keeping his clients informed of each step in the roofing process. 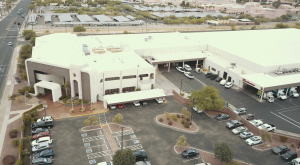 After the details of the roof application were ironed out, the roofers set up their safety precautions. The Hensley building’s low-slope roof did not pose any unusual safety precautions, but Tucson regularly experiences strong winds that make roofing jobs more dangerous. Bright light also presented a danger to the roofers’ eyes, especially after the white acrylic coating was applied. The light reflected off the roof from the intense Arizona sun can be blinding. Hughes and Caballero made sure that their roofers took appropriate measures against the wind and the blinding light.

During the project, safety meetings were held every morning before work to discuss any danger areas that might present themselves that day. The crew also had to ensure each day that the surrounding area was protected from overspray. Sometimes this involved moving company vehicles away from the building.

Once they climbed up onto the roof, the roofers removed and properly disposed of 830 linear feet of expansion joint. After new expansion joints were mechanically fastened to the existing metal deck, the roof was blown and pressure washed free of dirt and debris. Polyurethane foam requires a completely clean surface to ensure a proper bond.

Thermo-Prime was applied to the prepped roof at a rate of one-quarter gallon per 100 square feet. Next, a 1-inch thick layer of polyurethane spray foam was applied over the entire existing roof system. The foam was also used to form all penetration flashings as needed.

Finally, the white acrylic protective coating was applied evenly to the roof in two passes. Each pass used 1.5 gallons per 100 square feet, adding up to three gallons total as described in the manufacturer’s specifications and 10-year limited warranty requirements.

When All’s Said and Done

After three weeks of hard work, high winds and bright sun, Rain Man completed Hensley’s new monolithic roof system. The new roof, designed to have zero seams and zero breaks between flashings and the roof system, will now stand up to the harsh desert climate and add a minimum of an R-6 insulation value to the controlled environment warehouse.

The Hensley Beverage Company is thrilled with its new roof and ready to contract Mark Hughes and Rain Man Roofing for more work in the future, starting with the southern part of the Tucson facility in August.

Hensley’s Anthony Keffer was also kind enough to provide beverages — non-alcoholic, of course — direct from the warehouse to the roofers working in the hot sun. And in the evenings, they were treated to some Bud Light to celebrate a job well done.