Can stormwater management using rooftops in urban areas be the financial solution to our growing urban stormwater problem? Will public-private partnerships with building owners help to provide a government service—stormwater drainage—in a more cost-effective manner? As cities struggle with the high administrative and procurement costs and time delays to manage stormwater, should we be looking up to roofs as part of the solution? Can we avoid more regulations and instead look to market-based solutions? These questions are beginning to be discussed and tested as new, innovative approaches to solving difficult and expensive urban stormwater-management issues. 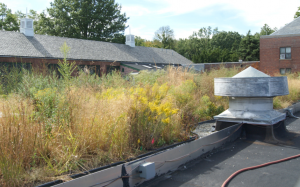 Many cities and counties are dealing with more stringent stormwater permits issued from the Washington, D.C.-based U.S. Environmental Protection Agency (EPA) and state environmental agencies that implement the federal Clean Water Act. Many communities are operating under federal court orders and administrative consent orders from EPA to reduce stormwater runoff into rivers, lakes and streams. In addition, there are 177 communities in the U.S. where stormwater and wastewater-collection systems are combined, known as combined sewer overflows (CSOs). These CSOs result in billions of gallons per year of combined untreated stormwater and wastewater discharged into waterways during large rainfall events. Funding crises have developed in many municipalities as they create programs, hire new staff, and design and construct new infrastructure to meet these regulatory requirements.

Many cities have spent billions of dollars separating stormwater drainage from wastewater-collection systems by installing new, costly drainage systems. In addition, large underground storage tunnels and vaults have been installed by many cities at the costs of billions of dollars per installation. These tunnels and vaults are designed to collect, hold and slowly release the stormwater into the treatment network. Increasing stormwater pipe sizes and creating tunnels and vaults is extremely costly. For example, Washington, D.C., just broke ground on the construction of two stormwater tunnels that are currently projected to cost $2.6 billion dollars to construct. Just one of the tunnels will be 13-miles long and hold 157 million gallons of combined stormwater and wastewater in 23-foot-diameter tunnels, 100-feet below the surface.

Roofs are considered an impervious surface because they are designed to shed stormwater through drainage networks into the collection system beneath city streets. For example, in New York City alone roofs make up 11.5 percent of the total area, or roughly 944.3 billion square feet, according to the city’s Department of Design and Construction’s Cool & Green Roofing Manual. Rather than looking at roofs as part of the stormwater problem in cities, they should be viewed as a possible solution.

A Little Piece of the Planet