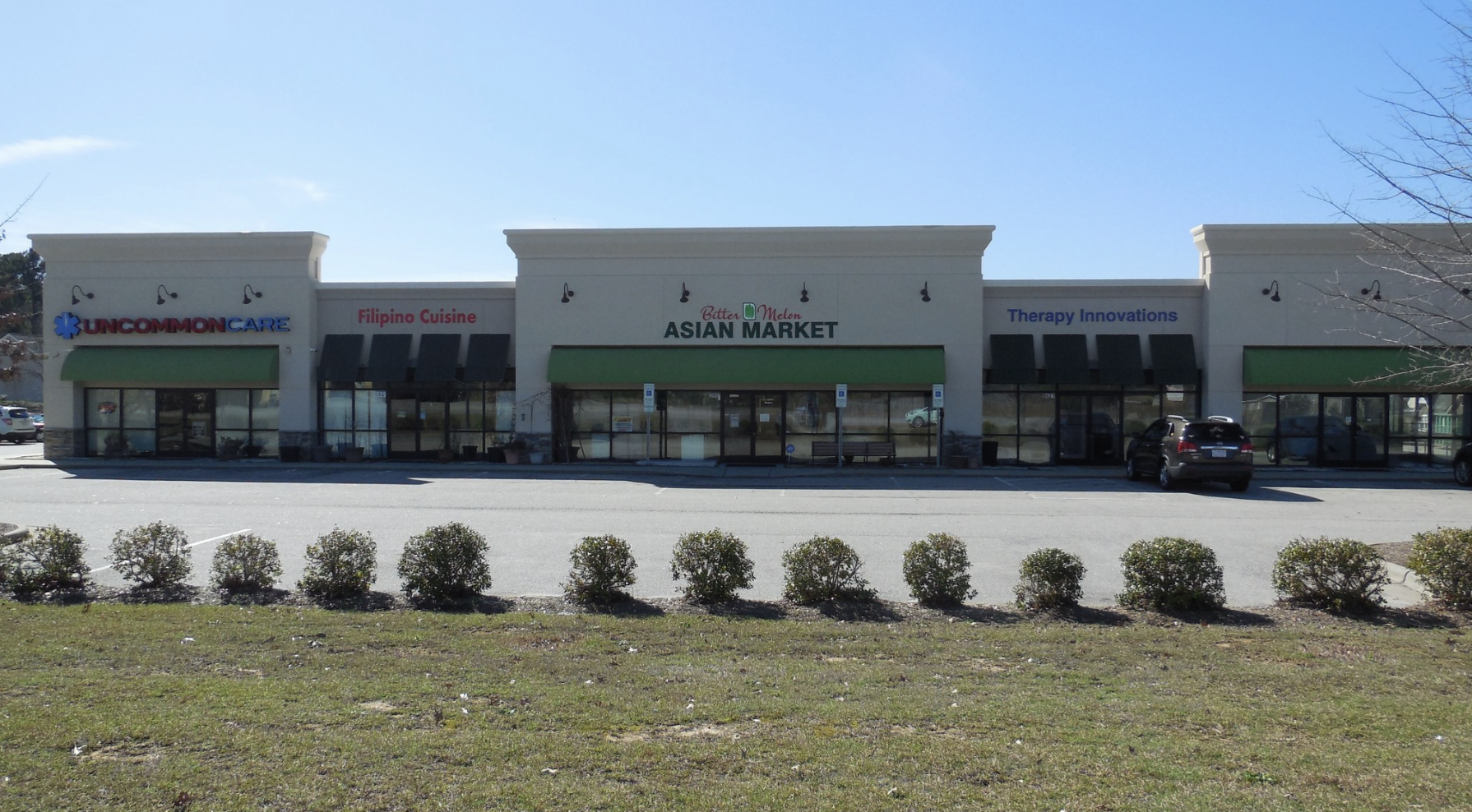 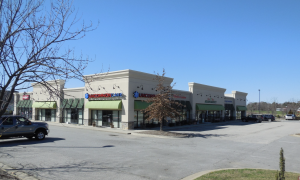 Glenn Wujcik, the owner of All-County Contracting (ACC), headquartered in Raleigh, North Carolina, has been fascinated with spray rigs since he and his brother first used one in 1979 to insulate a van with spray polyurethane foam (SPF). His company specializes in applying SPF and roof coatings on existing buildings. Lately, he’s found silicone roof coatings are making up an increasing share of his company’s workload.

“The coatings industry in general is booming right now,” Wujcik says. “A lot of the TPO and EPDM roofs are nearing the end of their service life, and instead of tearing them off, if you catch them in time, you can go over it with the silicone coating and get a new 10-year warranty. Silicones have a proven track record. When you put it on properly, it weathers really well. It has excellent elongation.”

Wujcik characterizes himself as a hands-on owner who strives to be on the site for every job. He believes there is an art as well as a science to operating a spray rig properly, and experience is crucial. “I love doing this,” he says. “I’ve been doing it for more than 30 years, my business partner’s been doing it more than 30 years, and our best sprayer has sprayed more than both of us combined. We know what we have to do, we know how long it’s going to take, and we have the right equipment. We are really good about the preparation and the application.”

Coatings and spray foam are excellent products, but only in the right situations, notes Wujcik. They should only be used on the proper substrates and applied in the right conditions. “In spraying, the most important thing is knowing when not to spray,” he says. “Right now, I’m working on a job, and for the last two days, there have been 10-20 mph winds, and I haven’t finished it yet. I told the owner, ‘I haven’t oversprayed anything yet, and I don’t want to.’ I’d rather do it right and not have any problems.”

Wujcik points to a recent project on a mixed-use building in Angier, North Carolina, to illustrate some of the benefits of a silicone roof coating. “It’s a U-shaped building with about 14,000 square feet of roof space,” Wujcik notes. “There’s a bakery, a restaurant, a pharmacy, and a doctor’s office, and there are a lot of penetrations on the roof.”

The penetrations were the site of multiple leaks. Wujcik decided to use a high-solids silicone coating, GE Enduris 3502, to prevent leaks and extend the life of the roof. The monolithic coating will seal the penetrations, and the white reflective surface will provide an additional benefit: reduced cooling bills in the summer. “Putting a white coating on it is going to reduce their energy load in the summer pretty substantially,” he says.

On this project, the first step was to pressure wash the existing roof. “That’s where most coating jobs fail — surface preparation,” Wujcik states. “Washing the roof properly is one of the most important steps.” 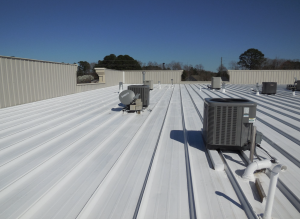 The high-solids silicone coating was applied to the existing standing seam metal roof. Care had to be taken to ensure all sides of the metal ribs were properly covered with the material. Photos: All-County Contracting (ACC)

The company uses 4,000 psi belt-drive power washers, so care has to be taken not to damage the roof or skylights, which are covered and marked for safety reasons. The company follows all OSHA regulations, which in most cases means setting up safety lines 6 feet from the edge, with stanchions 10 feet apart, to establish a safety perimeter.

“Safety is my number one thing,” Wujcik says, “I’ve been doing this a long time and I’ve never had a lost-time accident. I preach safety. That is absolutely the most important — and accidents are expensive.”

The next step is to apply the GE Seam Sealer at the penetrations. “When this roof was originally installed 20 years ago, they did it textbook perfect,” Wujcik notes. “Each 4-inch pipe coming though had at least 20 fasteners holding it down.”

However, over time, the rubber grommets on the fasteners can degrade, and expansion and contraction can take their toll. “We have really hot summers here, we’ve seen roofs where literally thousands of fasteners have backed out,” he says.

The seam sealer is typically applied with a brush. “Any horizontal seams, any termination bars, any penetration that goes through the roof that has a screw, we apply the seam sealer,” he says. “It goes on quite thick — at about 80 linear feet per gallon.”

After the seam sealer cures for one day, the coating is applied. Spraying flat roofs with EPDM, TPO, and PVC membranes is a fairly straightforward process, according to Wujcik. “You basically spray it just like you would spray paint a wall,” he says. “You overlap your spray pattern 50 percent. I’ve been doing it for so many years, and you get a feeling for how fast you can go.” 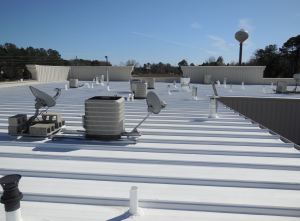 After the roof was power washed, the seam sealer as applied to the seams and penetrations. After it cured, two coats of the high-solids silicone product were sprayed on the roof. Photos: All-County Contracting (ACC)

A wet mil gauge is used to ensure the proper thickness. Wujcik notes the high-solids silicone formulation has very little shrinkage as it dries.  “As we’re spraying, we insert the gauge into the wet coating and it tells you how many mils you have sprayed down. In this case, we were applying to achieve 21 dry mils.”

The spray rig is set up on the ground and operated by one man, while the sprayer and the hose man are working on the roof. “It’s a minimum of a three-man crew per coating rig,” he notes. “You’re dealing with about 6,000-7,000 psi of pressure, so you need special hoses rated for at least 7,000 psi. You never want to kink them. If you busted a hose, by the time someone came down from the roof to the machine, you could pump out 20 gallons on the ground. That’s why you need a ground man.”

Flat roofs are sprayed perpendicular to the roof, but the standing seam metal roof on this project called for a different technique. “On metal roofs with high ridges, if you don’t angle your gun you’ll miss the sides of the ribs,” Wujcik points out. “You have to do it from one direction, working one way, and then turn around and do it from the other direction, working the other way. If you try to spray straight down on the roof, you’re going to miss the nooks and crannies in all of those ribs.”

The surface area of the ribs also has to be taken into account when calculating the amount of liquid that will be applied, notes Wujcik.

The final step in the process is to touch up the applications at the penetrations to ensure a clean look. On vertical surfaces including parapet walls, crews ensure the coating is applied to a uniform height. “On the last day, we take up brushes and rollers and cut in straight lines,” he says. “That really finishes the job. The detailing gives it that final touch.”

The active and open jobsite posed some challenges. “There were a lot of cars around the building, so we had to be very careful not to hit them with overspray,” Wujcik notes. “When you’re working on a plant, you might be able to move all of the cars to a different location, but at doctor’s offices and restaurants, you have traffic in and out of the parking lot all of the time. We can use car covers if there are a few cars there, but when they are in and out like that, it’s not practical, so you have to be very careful when you do the job.”

The job was completed in the winter, and bad weather resulted in some delays. “A job like this in the summertime would have been a weeklong project at most,” Wujcik notes. “This project took almost a month because we had an exceptionally cold winter with a lot of high winds. It took extra time, but that’s my philosophy: If it’s not the right conditions, I just won’t do it.”

“We inspect our jobs every year,” Wujcik says. He notes that annual roof inspections and routine maintenance are the simplest and most cost-effective ways to ensure the roof’s life span. Yet these steps are often neglected.

“It’s amazing that some of these multi-million-dollar companies don’t send their maintenance guys up on the roof for 10 minutes to check the drains,” he says. “If a roof has 2 inches of pine needles around the drain, the whole roof has to have 2 inches of water on it before it begins to drain. That puts tremendous, tremendous stress on a roof. Keeping your drains clear is really important.”

Be the first to comment on "Silicone Coating Restores the Roof, Reduces Utility Costs at Mixed-Use Complex"