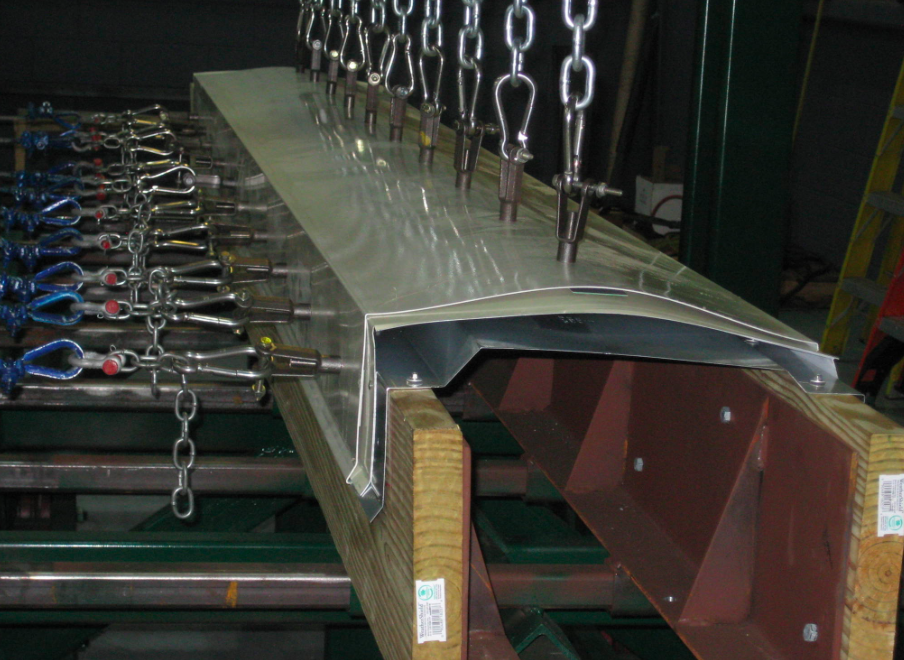 As part of the ES-1 testing protocol, RE-3 tests upward and outward simultaneous pull of a horizontal and vertical flanges of a parapet coping cap. Photo: OMG Edge Systems 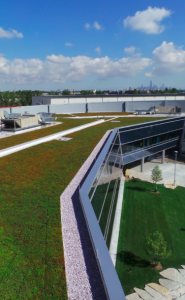 The effect of high winds on roofs is a complex phenomenon, and inadequate wind uplift design is a common factor in roofing failures. Damage from wind events has historically been dramatic, and wind-induced roof failure is one of the major contributors to insurance claims.

Roofing professionals have long recognized the importance of proper low-slope roof edge and gutter designs, particularly in high-wind conditions. For this reason, SPRI, the association representing sheet membrane and component suppliers to the commercial roofing industry, has spent more than a decade enhancing testing and design standards for these roofing details.

SPRI introduced the first version of its landmark standard, ANSI/SPRI/ES-1 “Wind Design Standard for Edge Systems Used with Low Slope Roofing Systems” in 1998. Since then, the association has continually revised, re-designated and re-approved the document as an ANSI (American National Standards Institute) standard.

Testing of edge securement per ANSI/SPRI ES-1 is required per the International Building Code (IBC), which has been adopted by every state in the country.

Construction professionals have been successfully using the standard, along with the specifications and requirements of roofing membrane and edge system manufacturers to strengthen their wind designs.

Until recently, the biggest news on the wind design front was the approval of ANSI/SPRI/FM 4435/ES-1, “Wind Design Standard for Edge Systems Used with Low-slope Roofing Systems.” Let’s call it “4435/ES-1” for short. SPRI knew recent post-hurricane investigations by the Roofing Industry Committee on Weather Issues (RICOWI) and investigations of losses by FM Global consistently showed that, in many cases, damage to a low-slope roof system during high-wind events begins when the edge of the assembly becomes disengaged from the building. Once this occurs, the components of the roof system (membrane, insulation, etc.) are exposed. Damage then propagates across the entire roof system by peeling of the roof membrane, insulation, or a combination of the two.

Recognizing that edge metal is a leading cause of roof failures, SPRI has redoubled its efforts to create a series of new and revised documents for ANSI approval. As has always been the case, ANSI endorsement is a critical step toward the ultimate goal of getting these design criteria included in the IBC.

Roofing professionals understand that successful roof design requires the proper integration of a wide variety of roofing materials and components. For years, leading roofing manufacturers have taken a “systems” approach to their product lines. Recently, SPRI has zeroed in on the roof edge. Low-slope, metal perimeter edge details include fascia, coping and gutters, are critical systems that can strongly impact the long-term performance of single-ply roofs. 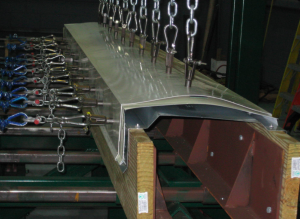 As part of the ES-1 testing protocol, RE-3 tests upward and outward simultaneous pull of a horizontal and vertical flanges of a parapet coping cap. Photo: OMG Edge Systems

SPRI first addressed roof gutters in 2010 with the development of ANSI/SPRI GD-1. The testing component of this document was recently separated out to create a test standard and a design standard. The test standard, GT-1, “Test Standard for Gutter Systems,” which was approved as an American National Standard on May 25, 2016.

Similarly, SPRI has revised 4435/ES-1 to only be a test standard.

IBC requires that perimeter edge metal fascia and coping (excluding gutters), be tested per the three test methods, referred to as RE-1, RE-2 and RE-3 in the ES-1 standard. The design elements of ES-1 were never referenced in code, which caused some confusion as to how ES-1 was to be applied. The latest version of 4435/ES-1 (2017) only includes the tests referenced in code to eliminate that confusion.

FM Global’s input was instrumental in the changes in 2011 when ANSI/SPRI ES-1 incorporated components of FM 4435 to become 4435/ES-1. However, there are no additional FM related changes in the latest 4435/ES-1 standard. 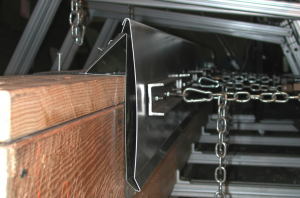 This gravel stop is being tested according to the ANSI/SPRI ES-1 standard using the RE-2 test for fascia systems. Photo: OMG Edge Systems

Per ANSI requirements, 4435/ES-1 2011 needed to be re-balloted, which is required by ANSI every five years. SPRI took this opportunity to have it approved as a test standard only to eliminate the confusion referenced above. FM Global was consulted and indicated it wanted to keep “FM” in the title. (FM was on the canvas list for the test standard and actually uses it as its own test standard.)

The design portions of the ES-1 edge and the GD-1 gutter standards have been combined and are now referenced by SPRI as ED-1. It has been developed and is currently being canvassed as an ANSI standard that will provide guidance for designing all perimeter edge metal including fascia, coping, and gutters.

ED-1 will be canvassed per the ANSI process later this year. However, SPRI is not planning to submit ED-1 for code approval.

SPRI ED-1 will include:

If this sounds a tad complex, imagine the design work required by the dedicated members of SPRI’s various subcommittees.

The Test Methods in Detail

The GT-1 standard is the newest, so let’s tackle this one first. As noted above, the ANSI/SPRI GT-1 test standard was developed by SPRI and received ANSI Approval in May of 2016. Testing of roof gutters is not currently required by IBC; however, field observations of numerous gutter failures in moderate to high winds, along with investigations by RICOWI following hurricanes have shown that improperly designed or installed gutters frequently fail in high wind events. GT-1 provides a test method that can be used by manufacturers of gutters, including contractors that brake or roll-form gutters, to determine if the gutter will resist wind design loads. Installing gutters tested to resist anticipated wind forces can give contractors peace of mind, and may provide a competitive advantage when presented to the building owner. 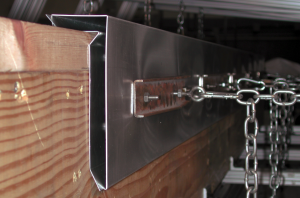 Note also that the units changed from lbf/ft2 (pound force per square foot) to lbs/lf (pounds per linear foot), which was done so that the tests could be run using the test apparatus loads without having to convert to pressures.

The GT-1 standard specifies a laboratory method for static testing external gutters. However, testing of gutters with a circular cross-section is not addressed in the standard, nor does the standard address water removal or the water-carrying capability of the gutter. In addition, downspouts and leaders are not included in the scope of the standard.

SPRI intends to submit ANSI/SPRI GT-1 for adoption in the next IBC code cycle.

As referenced above, IBC requires that perimeter edge metal (fascia and coping), excluding gutters, be tested per three test methods, referred to as RE-1, RE-2 and RE-3 in the ES-1 standard.

RE-1 tests the ability of the edge to secure a billowing membrane, and is only required for mechanically attached or ballasted membrane roof systems when there is no peel stop (seam plate or fasteners within 12 inches of the roof edge). RE-2 tests the outward pull for the horizontal face of an edge device. RE-3 tests upward and outward simultaneous pull on the horizontal and vertical sides of a parapet coping cap.

All versions of ANSI/SPRI ES-1 and ANSI/SPRI GD-1, the 2011 version of ANSI/SPRI 4435/ES-1, and the new ED-1 standard all provide design information for calculating roof edge design pressures. These design calculations are based on ASCE7 (2005 and earlier), and consider the wind speed, building height, building exposure (terrain), and building use. 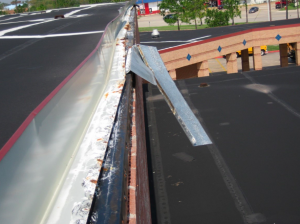 However, as stated above, IBC requires that the load calculation be per Chapter 16 of code, so the SPRI design standards are intended only as a reference for designers, fabricators, and installers of metal roof edge systems.

ES-1-tested edge metal is currently available from pre-manufactured suppliers, membrane manufacturers and metal fabricators that have tested their products at an approved laboratory.

A list of shop fabricators that have obtained a sub-listing from NRCA to fabricate the tested edge metal products are also available at www. nrca.net/rp/technical/details/files/its details/authfab.aspx.

As far back as 1998, SPRI broke ground with its ANSI/SPRI/ES-1 document addressing design and testing of low-slope perimeter edge metal. Today, the trade association has a variety of design documents at the roofing professional’s disposal, and is working to get ED-1 approved as an Edge Design Standard to be used for low-slope metal perimeter edge components that include fascia, coping and gutters.

All current and previously approved ANSI/SPRI standards can be accessed directly by visiting https://www.spri.org/publications/policy.htm.

For more information about SPRI and its activities, visit www.spri.org or contact the association at info@spri.org.

Mike Ennis joined SPRI in 1993. He has chaired a variety of SPRI committees and task forces and served as president from 2004-06. He became technical director of SPRI in 2007.