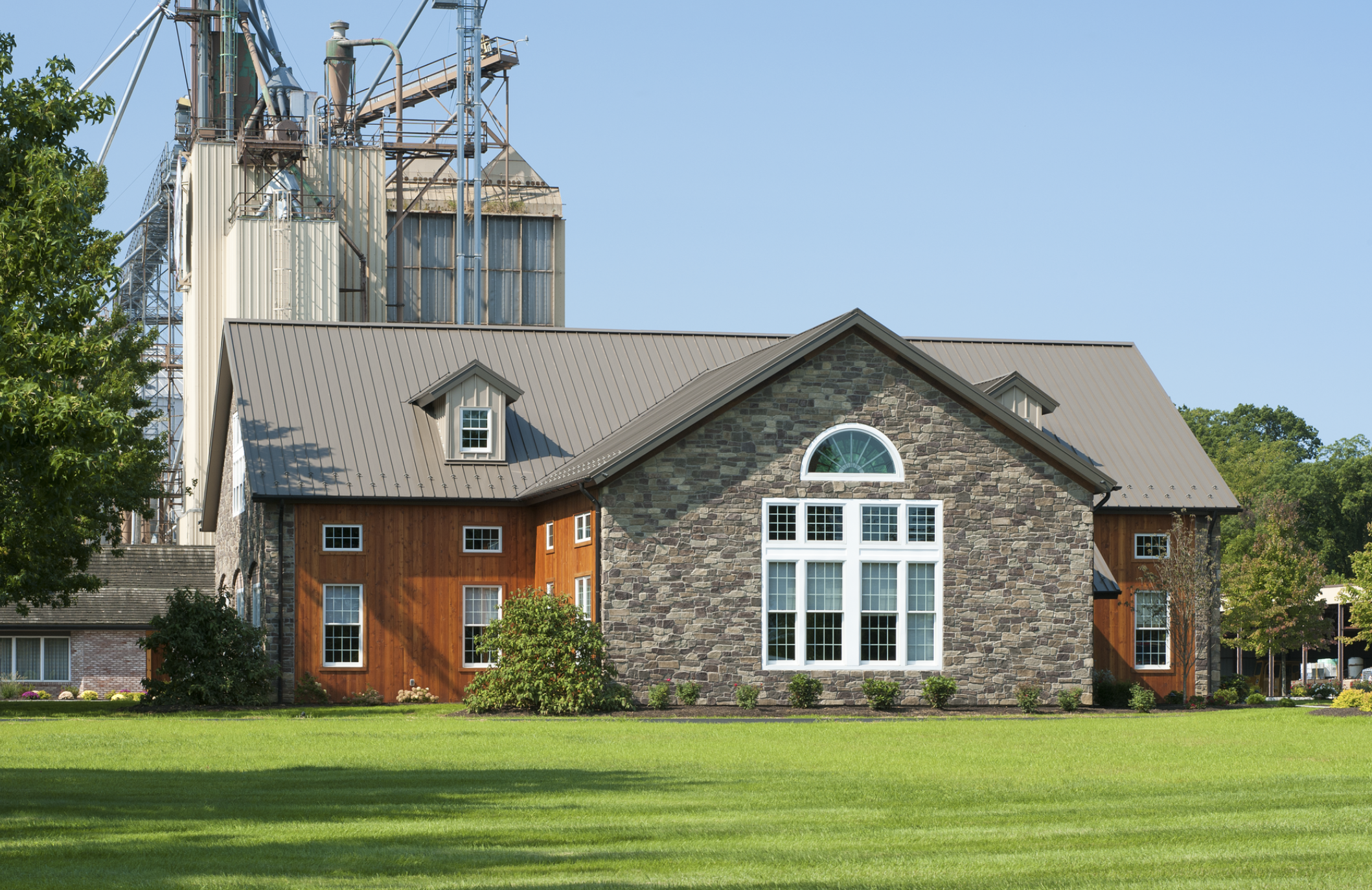 The Jaindl Farms office complex sits on an a 12,000-acre turkey farm complete with its own feed mill. Photo: Steve Wolfe Photography. 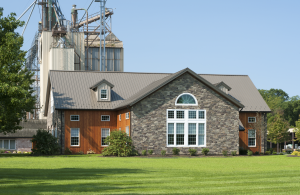 The Jaindl Farms office complex sits on an a 12,000-acre turkey farm complete with its own feed mill. Photo: Steve Wolfe Photography.

Jaindl Farms is a multigenerational family business that encompasses a land development company and a fully integrated turkey farm. Its headquarters sits on 12,000 acres of farmland in Orefield, Pennsylvania, where the company grows the crops to make the feed for its turkeys. When the owners contacted MKSD Architects in Allentown, Pennsylvania, about adding space to their offices, the goals were to provide room to expand and to honor the Jaindl family’s history and legacy.

“The owner has a deep appreciation for all things agrarian and for old barns,” recalls Todd Chambers, partner, MKSD Architects. “One day we were meeting about the project, and he said, ‘What do you think about reusing the timber frame of an old barn?’ A light bulb went off.”

A large barn in Northampton County was located and dismantled, and the frame was repurposed for the office addition. The new two-story stone structure connects to the existing one-story office building, which was roofed with natural cedar shakes. A standing seam metal roof was specified for the new structure in 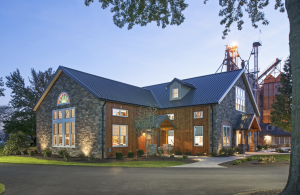 The new two-story addition was constructed with wood repurposed from a barn built around 1900. It was topped with a new standing seam metal roof. Photo: Steve Wolfe Photography.

keeping with the traditional architecture of the area. “We were concerned about the aesthetics, so standing seam was an obvious choice,” Chambers says. “We tried to keep the penetrations to a minimum and keep them out of the view of the main facade.”

The roofing contractor on the project was The Gehringer Company, headquartered in Whitehall, Pennsylvania. The company was called in to handle the project by the general contractor, Allentown-based Bracy Contracting Inc. The Gehringer Company’s president, Tom Gehringer, recommended a Dutch Seam roof system manufactured by ATAS International because it had the durability and aesthetics the project required, but was also easy to install. “It’s less labor-intensive than other systems because it doesn’t require a mechanical seamer,” he notes.

The roofing installation went very smoothly, according to Gehringer and Chambers. The Gehringer Company crews installed 6,400 square feet of ATAS MRD-110 Dutch Seam panels on the roof. They also installed approximately 500 square feet of metal panels as siding on the dormers. “It’s a 12-inch-wide piece with a raised section at the lock,” notes Gehringer. “When it’s installed looks like board and batten siding.” 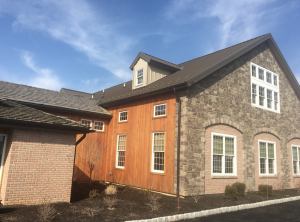 The roof features dormers to bring in natural light. The dormers are sided with metal panels to minimize roof maintenance. Photo: The Gehringer Corporation.

Installation began in January 2017, so the weather posed the biggest challenge. “We did it when the temperatures were pretty low. The highs were in the 20s,” Gehringer recalls. “The nice thing is you can install the system in almost any temperature.”

After ATA-Shield high temperature synthetic underlayment was applied to the entire surface of the plywood deck, the roof panels were installed. “We worked from our aerial lifts,” Gehringer explains. “We purchased two aerial lifts several years ago and now use them for almost all of our steep roofing installations.”

Details included SL-2 Snow Meister snow guards from Berger Brothers. “In this climate, one of the tricky pieces with standing seam is sliding snow, so we specified snow guards that clamp to the standing seams,” Chambers says. “The ones we used emulate the turkey tail feathers.”

Roofing crews also tied in a small section of new cedar shakes to extend the hallway of the existing structure and connect it to the new addition. “We installed the original cedar shakes on the adjacent section for Bracy Contracting almost 20 years ago,” notes Gehringer.

The project went off without a hitch. Gehringer credits his company’s experienced crews and field supervisors for its 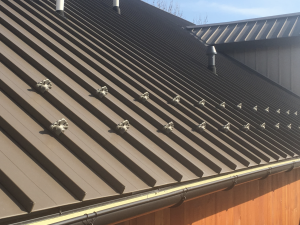 The snow guards installed on the project were chosen in part because they reminded the business owners of a turkey’s tail feathers. Photo: The Gehringer Corporation.

excellent track record. “I believe we’re one of the larger architectural metal roofing installers in our area and have virtually no callbacks on roofs we install,” he says. “What it boils down to is having people that know how to do it right — and having people that are committed to doing it right. And with architectural metal work, you have to take your time and do it right. This metal roof is going to look exactly like it looks now for at least 30 years.”

Looking back, what strikes Chambers is how different this project was from his typical assignments. “We’re commercial architects. We do a lot of health care work,” he says. “The ability to design something that’s not done every day, and is different than your typical approach, is refreshing and fun.”