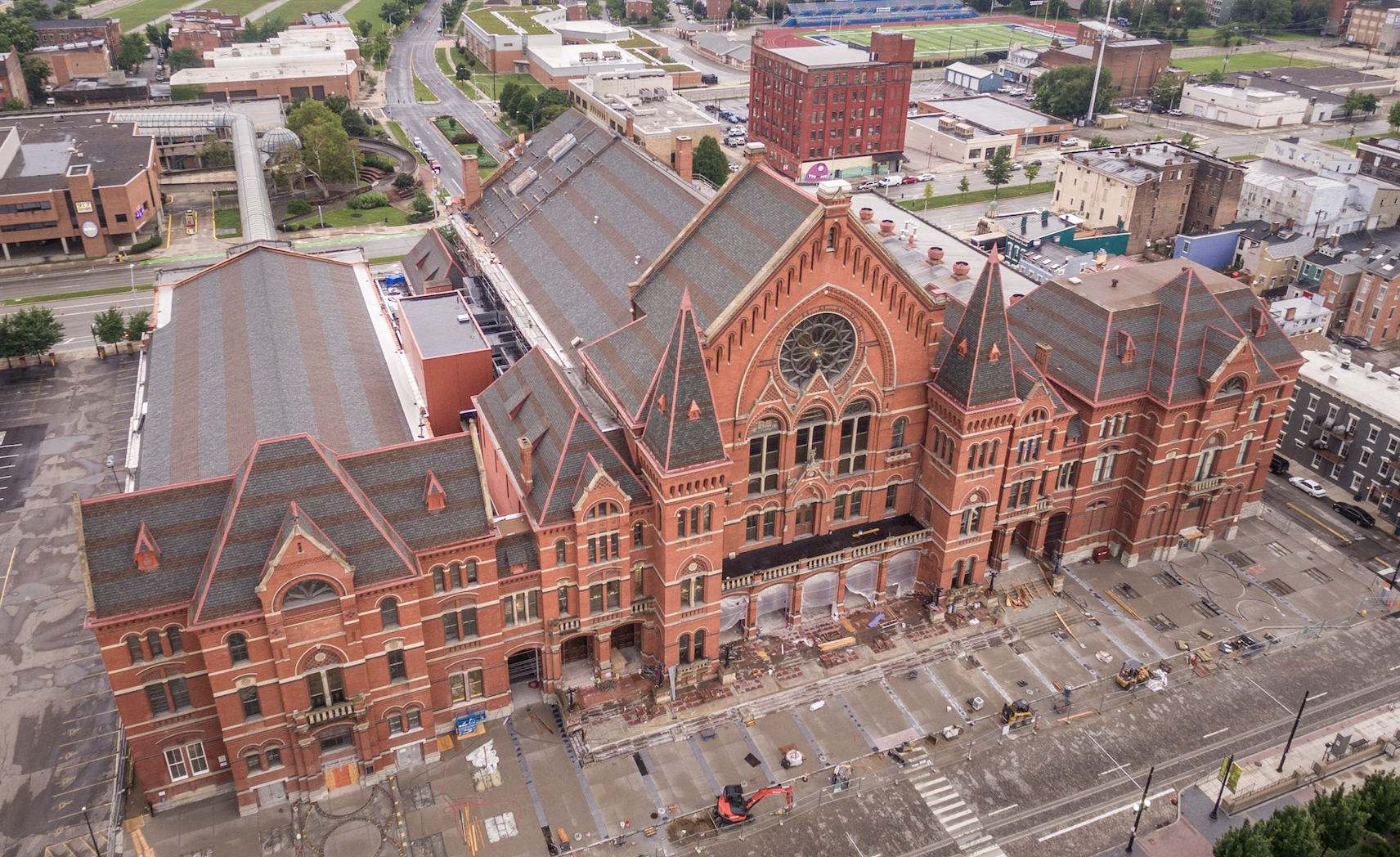 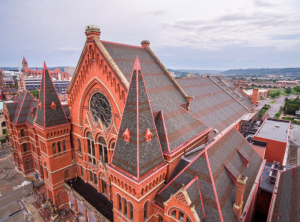 Originally designed by Samuel Hannaford in the 19th Century, the Music Hall first opened its doors in 1878. The Music Hall Revitalization Company coordinated the restoration of the 139-year old Cincinnati landmark, which just reopened to the public Oct. 6, 2017.
Photos: CertainTeed

The Cincinnati Music Hall is considered one of the largest and most beautiful concert halls and theaters in the world. It has played host to iconic performances and events for more than a century, from the 1880 Democratic National Convention to performances that helped shape the American arts scene.

A vision and product of 19th century architect Samuel Hannaford, Music Hall—as it’s known across the Queen City—first opened its doors to the public in 1878. Yet the doors on the 225,000-square-foot facility have been closed since May 2016 to allow for a complex interior and exterior restoration effort that would propel the aging building into the modern era while also preserving its beautifully unique characteristics.

Restoring the beauty of Hannaford’s showpiece was more than a simple facelift. According to the Music Hall Revitalization Company, the nonprofit coordinating and leading the renovation, engineers investigating the building discovered structural deterioration beyond what one would expect in a 139-year old building, and recommended actions secure the Music Hall’s long-term viability. 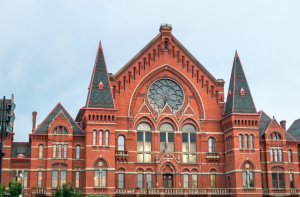 The Music Hall has been traditionally adorned with high-end shingles, and Grand Manor luxury asphalt shingles from CertainTeed were chosen to replicate the slate aesthetic and stand up to the elements. Photos: CertainTeed

Principal Daniel Imbus and his team were more than up to the task. Not only had Imbus Roofing performed the bulk of the roofing work at Music Hall over the past few decades, they have a rich legacy in the greater Cincinnati area. Among the other high-profile projects with connections to Imbus roofing are the Proctor & Gamble Twin Towers, the Walnut Hills Copper Dome, Paul Brown Stadium and the original Riverfront Stadium.

The team at Imbus worked closely with 3CDC, PWWG Architects and local distributor Midwest Roofing Supply to nail the aesthetic and capture the original essence of Music Hall.

“The roof replacement was a big part of the project, not only for protecting all the interiors that were being restored or replaced, but for the overall look of the building,” Imbus explains. “With the older building and the amount of other work being performed, just getting around the building and scheduling work around other trades such as painting, masonry, HVAC, etc., required a lot of planning.”

Imbus partnered with Seth Dorn, branch manager at Midwest Roofing Supply, to find the appropriate materials to for the front towers, Corbett Tower, and Opera House portions of the roof. According to Dorn, the Music Hall has been traditionally adorned with high-end shingles, so they chose Grand Manor luxury asphalt shingles from CertainTeed to replicate the slate aesthetic and endure the wind, rain, snow and other elements typical to Cincinnati. To recreate the distinctive striped pattern of the roof, crews installed approximately 600 squares of Grand Manor shingles in two colors, Stonegate Gray and Brownstone. 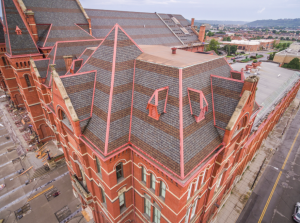 “We serviced Imbus Roofing with all potential materials for the project,” Dorn notes. “In addition to the shingles, we supplied DiamondDeck and WinterGuard underlayments from CertainTeed to further enforce weather protection.”

A large part of the roof replacement was the Main Hall, which sits above lower sections of the building and has a steep slope. To perform this installation, the Imbus Roofing team had to build scaffolding along the full gutter lines to provide safe and secure roof access and work platforms.

“With the steep slope of the roof, the shingles are an integral part of the exterior look of this historic building,” says Imbus. “It’s an introduction to the amazing interior renovation and exterior restoration.”

The project, more than seven years in the making, was completed on Oct. 1, 2017. The doors officially re-opened on Oct. 6 to kick off a weekend of events that included an opening night gala, a community Open House, and a pair of concerts featuring the Cincinnati Symphony Orchestra.

“It looks awesome,” reflects Dorn. “We will spotlight this job for all of our contractors and customers.”

“We had a great experience with this project,” Imbus adds. “It was a quick schedule with a lot of work to a signature building of Cincinnati. It is great being a part of a successful project that I think will impress everyone in the community.”