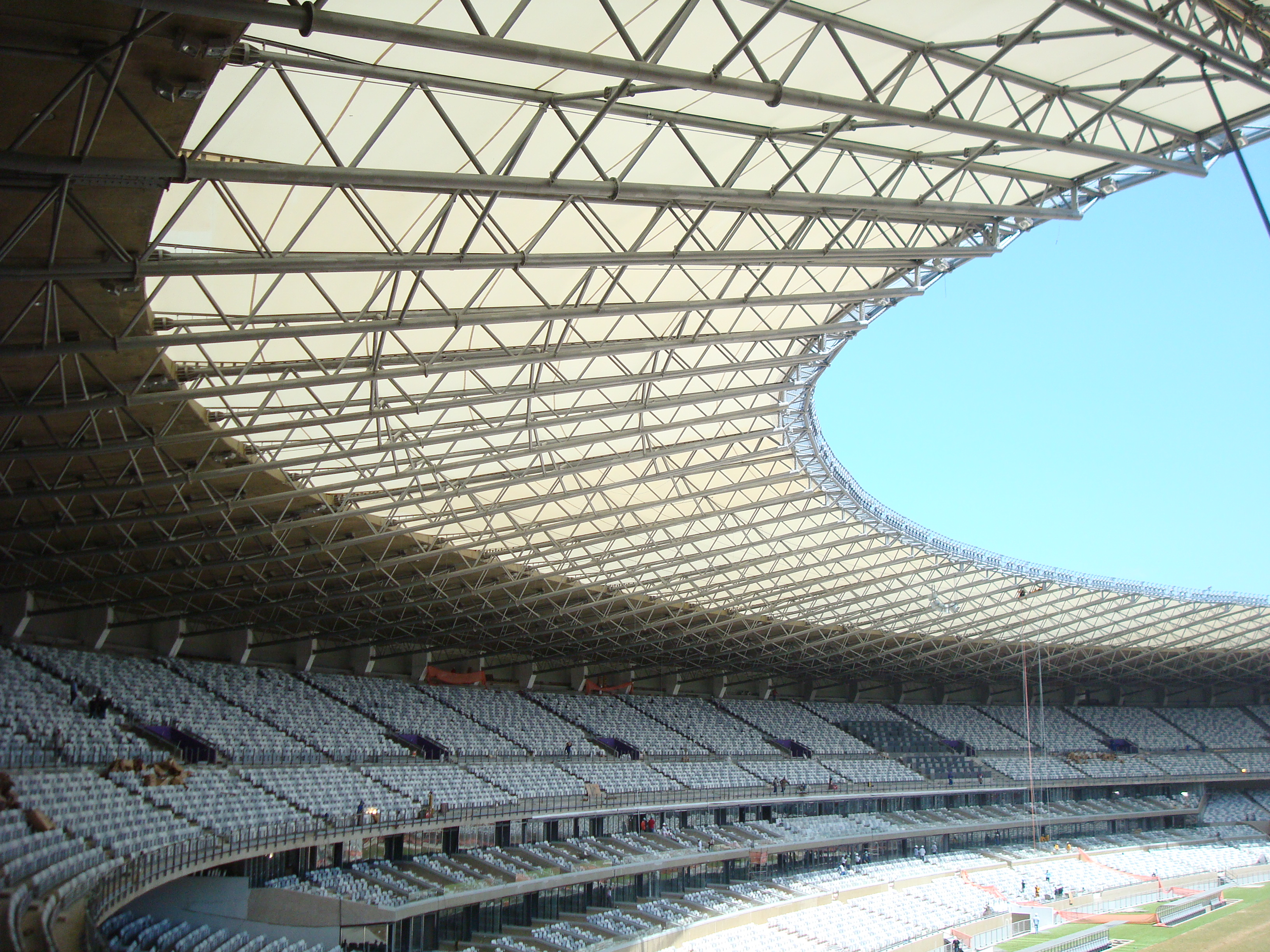 Estadio Mineirão, built in 1965 and listed as a national monument of Brazil, underwent a three-year modernization project to prepare for hosting six of the FIFA World Cup matches.

The Federation Internationale de Football Association (FIFA) World Cup is the king of soccer competitions, so it’s only appropriate that four of the 2014 venues are crowned with roof systems that are as strong as the competition inside the venues. Three venues feature lightweight tensile structures from Birdair and the fourth includes polycarbonate skylights from PALRAM. 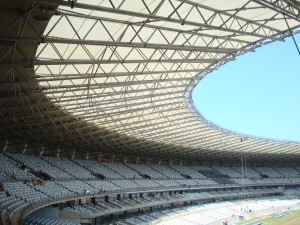 Estadio Mineirão, built in 1965 and listed as a national monument of Brazil, underwent a three-year modernization project to prepare for hosting six of the FIFA World Cup matches.

Estadio Mineirão, built in 1965 and listed as a national monument of Brazil, underwent a three-year modernization project to prepare for hosting six of the FIFA World Cup matches. It was transformed into a modern stadium with a new tensile roofing system from Birdair. The 141,000-square-foot tensile roof was added to the concrete upper tier of the stadium to provide shelter for 70,000 spectators while meeting aesthetic, acoustic and environmental impact requirements.

Birdair fabricated and supplied TiO2-coated PTFE, a Teflon-coated woven fiberglass membrane for the facility. Taiyo Birdair do Brasil, a subsidiary of Birdair, was responsible for installing the PTFE tensile membrane. TiO2 (titanium dioxide), a non-toxic and flame-resistant coating allows fabric to break down any organic materials that settle on the membrane, such as dirt. It is capable of withstanding temperatures from -100 F to 500 F, is unaffected by UV rays, and requires less maintenance to retain its appearance due to its self-cleaning capabilities. Ultimately, this TiO2 membrane is an economic and environmentally sustainable renovation that will provide fans with much-needed comfort, as well as improve a national landmark. 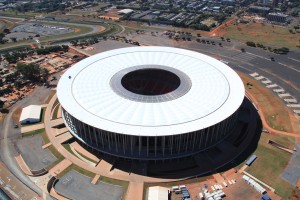 Estádio Nacional expanded its capacity from 42,200 to 70,042 to host seven World Cup matches.

Estádio Nacional, originally built in 1974 and located in Brazil’s capital, also underwent major reconstruction for the World Cup, expanding its capacity from 42,200 to 70,042 to host seven World Cup matches. Birdair fabricated and supplied the PTFE fiberglass membrane, clamping and hardware for the facility. The consortium Taiyo Birdair do Brasil ­Entap ­Protende was responsible for installing the entire roof’s steel and cable structure, including the PTFE outer roof and liner membrane. The project involved building a new lower tier and retaining the upper tier with the addition of a new 920,000-square-foot double-layer suspended tensile roof. 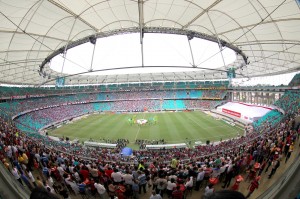 Fonte Nova Stadium’s oval-shape roof design will provide cover for 50,000 spectators during each of the six games it hosts during the tournament.

Birdair, through Taiyo Birdair do Brasil (TBB) Ltda., additionally was awarded a subcontract for the roof construction of Fonte Nova Stadium in Salvador, Brazil. The stadium is modeled on its predecessor, the Estadio Octavio Mangabeira, and features three levels of seating with a view of the magnificent Dique do Tororó. Its oval-shape roof design will provide cover for 50,000 spectators during each of the six games hosted at Fonte Nova during the tournament.

PTFE fiberglass membrane structures have received increased global recognition as green living is becoming more important. Upon completion, Estádio Mineirão and Estádio Nacional applied for LEED certification, which is given to projects that use less materials and increase daylighting to conserve resources and increase sustainability. 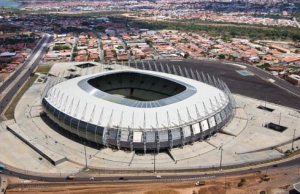 The Plácido Castelo Stadium in Fortaleza, Brazil, is popularly known as “Castelão”, part of a local tradition to nickname popular stadiums.

The Plácido Castelo Stadium in Fortaleza, Brazil, is popularly known as “Castelão”, part of a local tradition to nickname popular stadiums. Owned by the Brazilian government and inaugurated in 1973, the stadium was revamped for the 2014 World Cup.

“The Palram Project Support Team was given the task of providing an architectural solution for the roof skylight. The proposal implemented was a 7,000-square-meter transparent front edge roofing specially designed to allow natural daylight on the pitch,” says Tal Furman, Palram chief engineer. 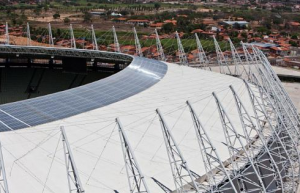 A 7,000-square-meter transparent front edge was specially designed to allow natural daylight on the pitch.

The Arena Castelão will host six World Cup matches, including a first round match between Brazil and Mexico and one of the quarter-finals. It was the first Brazilian Stadium to obtain the LEED certification. Since its re-inauguration, the Arena Castelão has hosted more than 50 matches of the local league and of the Brazil Cup. The stadium also hosted matches of the 2013 FIFA Confederations Cup and world-class concerts from artists like Paul McCartney and Beyoncé.

As part of PALRAM preparation for the World Cup, a polycarbonate roofing solutions professional seminar was held in front of Brazil top architects, engineers and construction professionals by Mr. Michel Allouch, Palram V.P. Marketing and development. As a result of this seminar, the same solution was implemented by PALRAM project team as well at the new Palmeiras Stadium in São Paulo, although this stadium is not hosting the World Cup games.

For over 50 years, PALRAM has been a global leader in manufacturing extruded thermoplastic sheets, offering an extensive product line for consumer, architectural, construction, sign & display, and agricultural applications.

Control Heat and Glare through Polycarbonate, Acrylic and Plastic Skylights