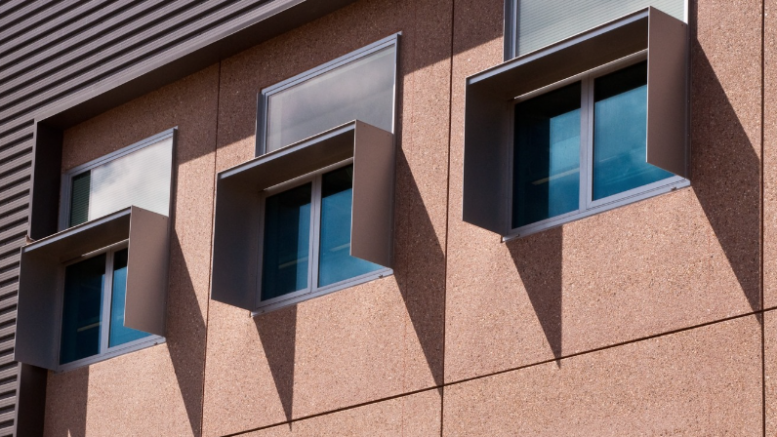 Shading devices added to the exterior of a building can serve the dual role of saving energy by reducing solar heat gain through the building envelope and creating elements of visual interest. These features help to define the building’s design as a welcoming and sustainable space, contributing to the property’s total value.

The latitude of the project site, the orientation of the building façades and the dimensions of the shading system contribute to the shading system’s proper function. Primarily, wall-mounted devices are installed on south-facing windows to shade from the high summer sun and to reduce cooling loads on HVAC systems. In Northern climates, they can admit the low-angle winter sunlight to supplement heating in the coldest months.

A simple roof overhang of sufficient depth can be positioned to serve as an energy-saving shading element for single-story, and in some cases two-story, structures. If energy savings can be shown to justify the cost, separate roofing structures or prefabricated devices also can be fitted to individual windows or glazed wall segments in a building of any height.

The Roof Overhang: How Much?

The depth of a roof overhang intended for shading purposes is determined by sunlight analysis at the building site.

The width of the roof overhang needed for effective shading of a specific structure varies with the direction that the southernmost exterior wall faces, combined with the location-specific angle of elevation of the sun.

One of these two equations is needed to size a particular overhang. (See Figure 1.)

If the height is known, then use:

If the depth is known, then use:

If “D” is already known, the first equation yields the height “h” of the shadow it will cast. To find the depth of overhang to produce the amount of shading desired (h), use the second equation for the required overhang depth (D).

An “exterior shading device” is defined by the International Building Code asa horizontal projection of more than 4 inches measured perpendicular to the exterior glass plane. While shading can be provided by extensions of roofing or overhangs, an additional approach is to apply specially designed separate shading devices to the exterior wall. These could take the form of a constructing a bonnet roof over a bay window, or they could be prefabricated exterior shading devices obtained from specialty manufacturers.

Fabricated shading devices may include simple horizontally projecting sheets of aluminum, tinted glass, polycarbonate glazing or other materials. Other examples include shading devices composed of parallel louver blades supported by outriggers or mounting arms anchored, with appropriate hardware, perpendicular to the fenestration framework or surrounding wall. Because of the variety of shading devices, a custom attachment bracket may be required. While selection of the outrigger configuration and blade shape is often driven by aesthetics, it is important to note that the shading device’s shape and size must be defined prior to any sunlight analysis.

In certain locations, vertically positioned shading devices can be practical to shield windows, especially those on the east or west facades, from unwanted solar heat gain and glare caused by the early morning or late afternoon sun. Shading devices can also be positioned to reflect natural daylight upward into the building, increasing its penetration into occupied spaces. Managing thermal performance at the exterior also keeps occupants inside more comfortable and can lower the demand on HVAC loads. Greater reliance on daylighting also can assist in reducing the number of electrical light fixtures, the associated energy loads and the building’s utility costs.

When applying separate devices, consideration must also be given to the added loads imparted to the building envelope. These include dead load of the shading device, and live loads caused by wind, snow and ice. Structural calculations must be performed to determine the load at anchor points.

For renovation projects that add shading devices to an existing building, remember that the extra load on the supporting members was not part of the building’s original design and may overstress the supporting members or perimeter attachment. The structural capacity and condition of any existing components and structures should be verified to avoid failures. Also, the configuration of the add-on shading device itself must consider differential thermal expansion between the frame and substrate, as well as between shaded and unshaded areas of the glass.

Shading devices are supported from fenestration framing members using specialized clips, brackets or anchors. Some are supported by outriggers, which in turn are attached to building structural elements, or to the window or curtain wall mullions.

Also, shading devices are likely to experience greater thermal movement than the structures to which they are attached. Such movement can also occur between brackets and vertical expansion mullions, or when shading devices span a building expansion joint. In such cases, the brackets can see relatively large (>1/4 inch) horizontal movement between any two brackets.

When installing shading devices, note that protrusions into walkways by separate shading devices must be considered. Although local building codes are the final arbiter, a general recommendation is to install the device at least 90 inches above walkways, with lateral protrusions into the walkway limited to 4 inches at most heights.

To aid contractors in addressing these shading device concerns, the Fenestration and Glazing Industry Alliance (FGIA) offers Technical Information Report TIR-A16-19, Design of Exterior Shading Devices. To avoid some of the technical and practical issues that can arise from improper design or application of shading devices, it is further recommended that TIR-A16 be used in conjunction with AAMA 514-16, Standard Test Method for Static Loading and Impact on Exterior Shading Devices. Both are available for purchase in the FGIA Online Store at FGIAonline.org/store.

About the author: Rich Rinka is Technical Manager, Fenestration Standards and U.S. Industry Affairs at the Fenestration and Glazing Industry Alliance (FGIA). He began his career with the association in 2012. He oversees the development of technical standards and provides representation at other industry organizations’ meetings to help keep members informed. For more information, visit FGIAonline.org.