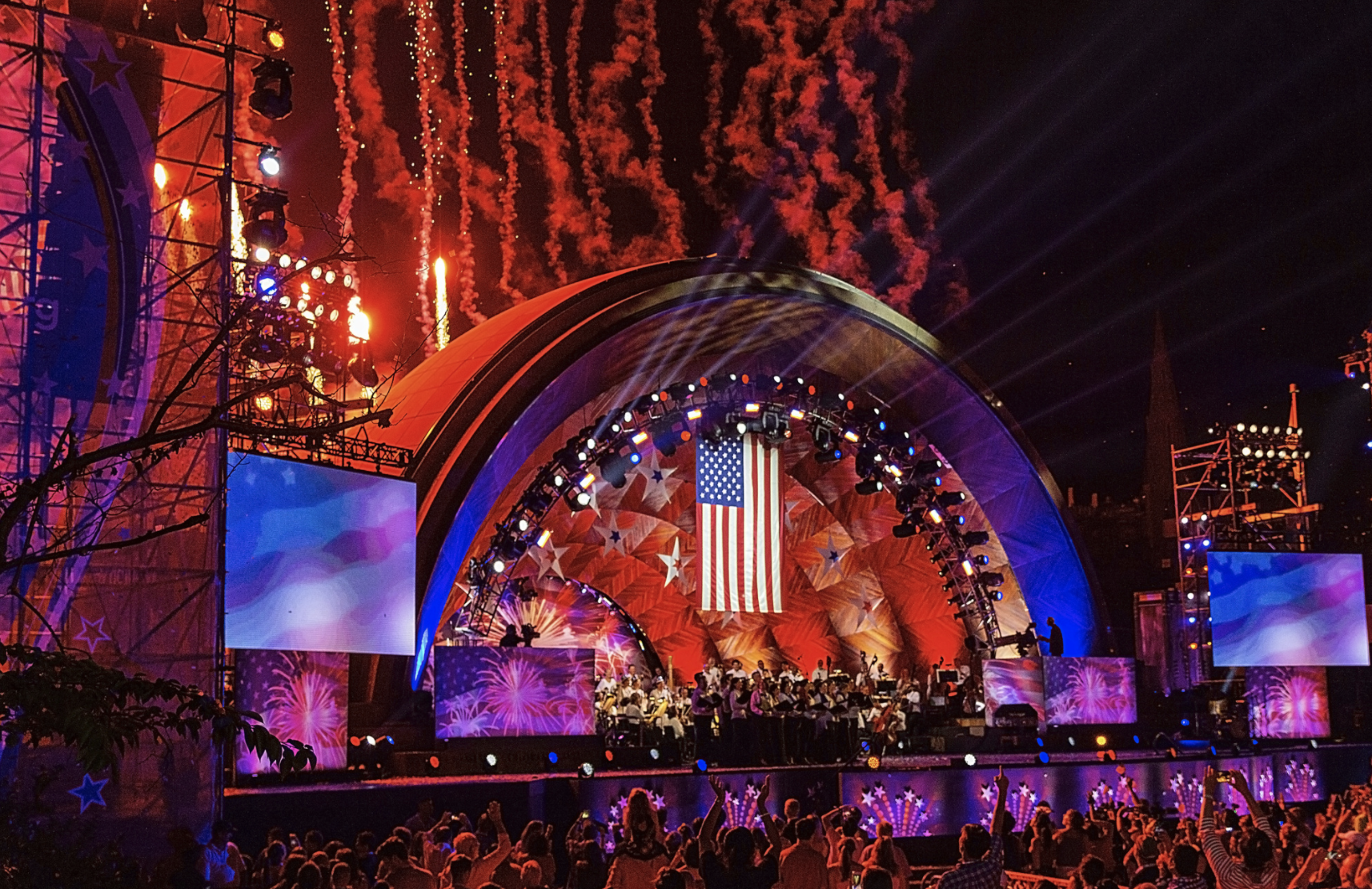 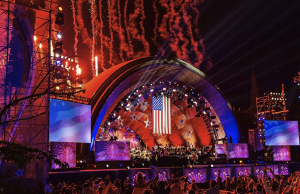 In an annual tradition, Boston kicks off its outdoor summer concert series with a nationally televised performance by The Boston Pops Orchestra on the 4thof July while fireworks snap and sparkle. The Pops perform from The Hatch Memorial Shell, an amphitheater shaped like the quarter of an orange that opens to the crowd on the Charles River Esplanade.

The difficulty of waterproofing this curved structure became apparent after the Massachusetts Department of Conservation & Recreation (DCR), owner and manager of the Hatch Shell put out a bid for a new roof around Labor Day in 2017. The specification called for a single-ply EPDM sheet with pre-cast concrete panels set atop pedestals as an aesthetic outer shell. 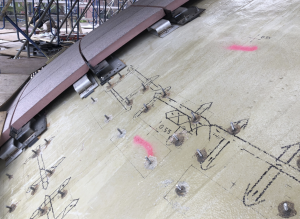 Working from cloud point data, lasers marked the position of the 1,476 pedestals that would hold the 3-inch thick concrete panels in place on the curved structure. Photo: Kemper System America Inc.

Shea Company project manager Michael Frank, RRC, reviewed the installation challenges with Folan. The EPDM sheet would need to be cut into multiple slices, and then require full adhesion to the curved roof deck as well as along all the lap seams. The pedestals for the 665 concrete panels also posed an issue since the anchor studs would penetrate the EPDM sheet. There would be nearly 4,500 penetrations on the job for the 1,476 stainless steel pedestals alone. No EPDM manufacturer would warrant the installation.

After the contract was awarded in October 2017, the construction team suggested an alternative inspired by a recent project for a youth center in Cambridge. There Shea Company used the Kemperol 2K-PUR liquid-applied reinforced membrane system to waterproof below a plaza deck topped with pedestals and pavers. The DCR and Boston architectural firm Bargmann Hendrie + Archetype Inc. gave the team a green light to explore further.

“The point we made was that because we are dealing with such an odd shape and with so many penetrations for the studs, it would be much easier to install the Kemperol liquid-applied system,” Frank says. “With the single-ply EPDM sheet, there would be ‘miles’ of field seams and, of course, every time you have a lap joint, you have areas that may be suspect at some point for leaking.”

The team contacted Kemperol manufacturer, Kemper System America Inc. of West Seneca, New York, and detailed specifications for the assembly along with cost estimates were presented to the owner and architect about two weeks later. “Obviously, there was a change in installed cost, but it was almost immediately accepted. So, we needed to completely shift gears, and revise our shop drawings and submittals accordingly,” Frank says. Among other things, the design of the stainless steel pedestals was modified to allow the panels to rest a couple of inches above the new reinforced membrane. 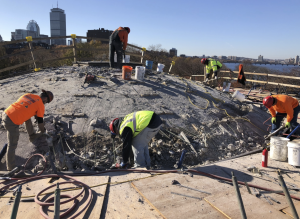 The surface preparation for the waterproofing started in April 2018, with a late May project completion target. The Folan crew removed the old cast-in-place terrazzo roofing system with air hammers and then peeled back an existing neoprene membrane to expose the structural concrete deck. Before the waterproofing membrane could be applied, Folan completely tented the roof with winter enclosures around the scaffolding, and then added diesel heaters to maintain the temperature above 40 degrees F.

Shea Company worked the job across the top of the structure and down row-by-row. After applying a Kempertec EP primer, crews applied Kemperol 2K-PUR resin with high-nap rollers a section at a time while laying Kemperol reinforcement into the resin from 20-foot rolls. Each roll was pre-cut lengthwise and then rerolled so it could be smoothly laid onto the curved surface. This was closely followed by a topcoat of the resin to fully embed the reinforcement in the resin. The system fully adheres to the deck and creates a monolithic watertight surface.

Each pedestal needed to be precisely positioned and anchored into place through the membrane, so the epoxy anchoring system for the studs was key to the project. 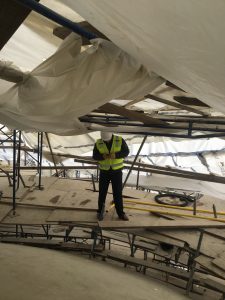 After the membrane fully cured, 3-D measurements were taken across the dome with point cloud software to help determine the height difference between the surface of the membrane and the desired finished elevation for the pre-cast panels. The surveying firm that made the measurements returned when it was time to set the pedestals.

“Their surveyors marked out the dome with lasers. They would set a mark, and say, ‘This is your point for four panels, and this is the cavity depth for the finished panel elevation,’” Folan explains. There was also GPR (Ground Penetrating Radar) scanning performed to locate existing reinforcement in the original structural concrete. His firm carefully drilled holes for the threaded studs to avoid the existing reinforcing steel, and the studs were then set in epoxy. Shea Company then applied GreatSeal PE-150 sealant around the pedestals and the heads of the bolts.

“Kemper System provided this detail, and they wanted the epoxy to ooze out of the pre-drilled holes when the anchors were inserted,” he says. “We would then hang the pedestals on the studs, and screw nuts onto the studs to hold the pedestal in place.”

The Folan team needed to wait for an architectural review of the pre-cast concrete panels before they could be installed. They were not all the same, but designed and numbered like puzzle pieces for their location on the shell. The 3-inch thick panels averaged 3 feet by 4 feet, and needed to be lowered by crane since they ranged from about 350 to 550 pounds each. 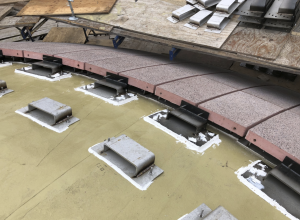 The studs for the pedestals were epoxied in place through the Kemperol membrane and top-sealed with GreatSeal construction sealant, also from Kemper System. Photo: Kemper System America Inc.

The panels were installed row-by-row starting at the bottom with 3/4-inch open joints between. “The biggest factor at that point was the depth of the cavity. Before we set a pedestal, we needed to know whether it should be shimmed 1/16th, 1/8th or 1/4 inch,” Folan says.

Though the panel fabrication process started late, the team worked six days a week with some 10-hour days to complete the job by a final June 15thdeadline. “As fast as they could get us the pre-cast panels, we were putting them in,” he recalls.

Looking back, Folan says the pedestals would have required much more time to install if the Kemperol system had not been selected, since there were nearly 1,500 of them and each would need to be covered with EPDM. “With the Kemper System detail, we could just keep moving to meet the deadline in time for the big July 4thcelebration.”