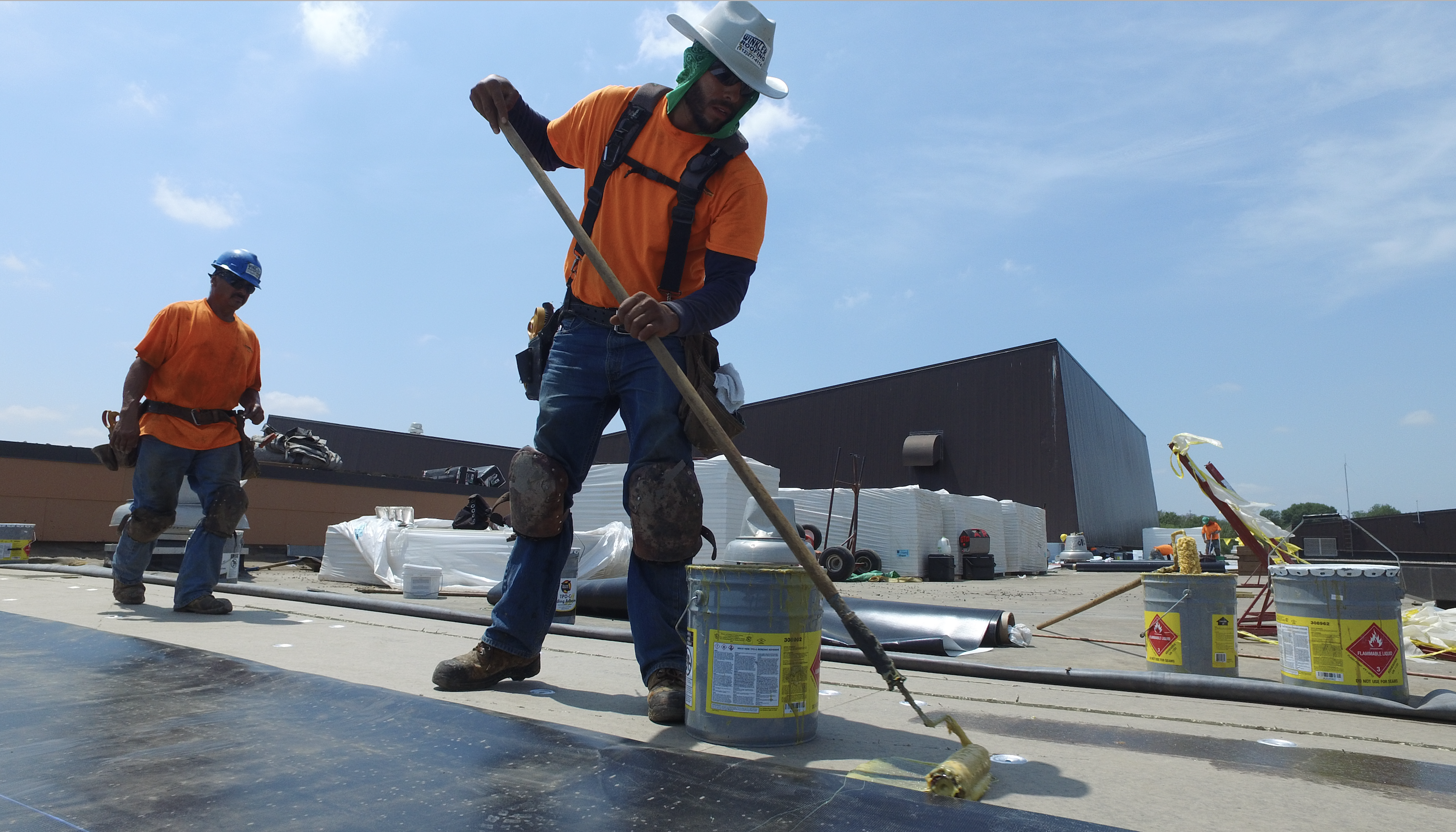 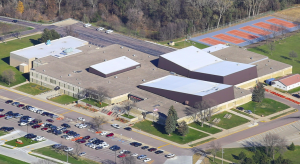 For the Sioux City Community School District (SCCSD) in Sioux City, Iowa, the final dismissal bell of the school year marks more than the start of summer break for students and staff. It also signals the beginning of roofing season.

In addition to routine maintenance and repairs, each summer brings at least one major roofing project for the district and its 24 facilities. Existing roofs that have fallen out of warranty coverage are replaced. The district also has completed a steady stream of construction projects over the past 16 years, replacing aging schools to meet evolving needs.

District enrollment has increased by several hundred students over that timeframe and now stands at more than 14,500. SCCSD also has expanded its programming, creating specialty elementary schools focusing on STEM (science, technology, engineering and math), computer programming, environmental sciences, the arts, and dual-language education in English and Spanish. These specialties continue with middle school exploratory classes and eventually lead to the Sioux City Career Academy, which offers numerous education pathways to help students prepare for postsecondary education and careers. 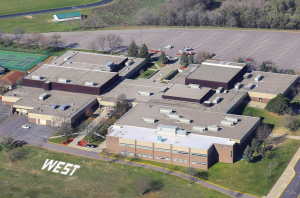 “Our facilities need to keep up with the curriculum and new technologies so we can provide the best possible learning environments for our students,” says SCCSD Director of Operations and Maintenance Brian Fahrendholz, adding that the facilities plan emphasizes both supporting student achievement and maintaining fiscal responsibility.

Winkler Roofing Inc. of Sioux City has been one of the district’s key partners in this process for more than 20 years, installing new or partial roofing systems on nearly every building in the district. The summer of 2017 saw its crews re-roof portions of two high schools and one elementary school, installing 335 squares of new TPO roof systems and removing 170 tons of ballast.

A crew of between six and nine professionals was on a jobsite at any given time. The three projects were completed in less than a month, beginning in late June and wrapping up in late July. And there was nothing on the punch list following the warranty inspections.

In recent years, SCCSD has adopted a systematic, long-range-planning approach to roof system management, working with local architects to evaluate its facilities, identify and plan work that needs to be completed the following summer, and map out future projects. The three roofs replaced in 2017 were indicative of this approach.

TPO Bonding Adhesive is applied on the substrate and the back of TPO membrane. Photos: Mule-Hide Products Co. Inc.

Each of the roofs was between 15 and 20 years old and had begun to show signs of age. Their manufacturers’ warranties had also expired in recent years, making their replacement next up on the district’s roofing project schedule.

“We typically replace roofing systems within five years of the warranty expiration,” Fahrendholz explains. “It enables us to stay ahead of the maintenance issues that can begin cropping up.”

SCCSD has several reasons for moving away from ballasted systems, according to Winkler Roofing President Jeff Winkler, P.E. In addition to reducing the roof’s weight and eliminating the cost of the ballast, unballasted roofs have a neater appearance and it is easier to monitor the membrane’s condition and find and repair any leaks. And, of course, when the time for re-roofing comes, there are no truckloads of ballast to remove and replace.

According to Winkler, SCCSD likes the durability of TPO membranes. “They like that the membrane is reinforced and that the seams are heat-welded, rather than seamed with primer and tape,” Winkler notes.

Re-roofing a 5,356-square-foot section at East High School entailed a complete tear-off of the existing ballasted EPDM roofing system and insulation down to the steel roof deck. The Winkler Roofing team then installed a new system topped with Mule-Hide TPO with CLEAN Film from Mule-Hide Products Co. It was the first time Winkler Roofing had installed the prodcut. 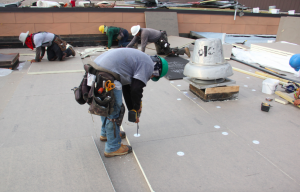 Three layers of polyisocyanurate insulation were mechanically fastened with screws and plates to enhance the building’s energy efficiency. The 60-mil TPO membrane was then fully adhered using TPO Bonding Adhesive from Mule-Hide Products.

The last step in any well-done TPO project is removing the dirt and scuffs that are inevitably left behind during installation, notes Winkler. That step is eliminated with this product; the crew simply removes the protective film covering the membrane to reveal a clean roof that is ready for inspection.

“The material is more expensive than regular TPO membranes, but there is the potential to make up for that in reduced labor costs,” Winkler notes.

The biggest benefit would be seen on roofs that have fewer penetrations, according to Winkler. Installing the membrane around penetrations requires removing a portion of the protective film, he explains. Because those areas are then exposed to scuffs and dirt, crews must go back and clean them by hand.

Meticulous detail work was key to the successful replacement of a 18,056-square-foot section of the roof at West High School. There were nearly four dozen penetrations in the roof, from 4-inch pipes to HVAC equipment measuring 8 feet by 12 feet. Many of the chimney stacks also were in spots that were awkward for the crew to work around. 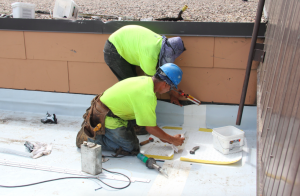 It was all in a day’s work for the Winkler Roofing team. “The quality of our detail work is one of the things we take pride in,” Winkler says. “The keys are good leadership, both on and off the roof, and a well-seasoned crew. My foreman, Absalon Quezada, is a master of solving the toughest of details and coordinating a well-orchestrated crew.”

The roof’s existing concrete deck made a mechanically attached system uneconomical, so a new ballasted system was specified. The existing ballast had deteriorated to the point that, if reused, it could puncture the new roofing membrane. So, all 100 tons of it, along with the existing EPDM membrane, were removed and disposed of. The pieces of stainless steel cap metal along the perimeter were removed and numbered in sequence for reinstallation later. Sections of water-damaged insulation were removed and replaced.

An additional layer of polyisocyanurate insulation was loose-layered over the entire roof to improve energy efficiency, followed by a new loose-layered 60-mil white TPO membrane. New ballast was then installed. 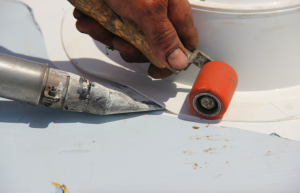 The crew navigated a challenging site while depositing the new ballast on the roof of the one-story building. The site offered only one feasible parking spot for the seven dump trucks that would deliver the rock, and that was on a lawn, just on the other side of two large trees. Crews carefully noted the location of sprinklers for the in-ground irrigation system to avoid driving over them, and shut the system down for several days in advance of the delivery to minimize ruts caused by the trucks’ tires. The trees’ trunks were spaced less than 20 feet apart and the canopies have grown together, leaving only small tunnel to feed the conveyor through. Crews kept the conveyor low as they extended it through the branches, then brought it to roof height by repeatedly raising it and the backing the truck up.

At Riverside Elementary School, a 7,314-square-foot section of roof was replaced with a 60-mil, fully attached TPO system.

The existing EPDM membrane, ballast and edge metal flashings were removed and disposed of. Crews removed and replaced any water-damaged insulation, added an additional layer of polyisocyanurate insulation throughout to increase the building’s energy efficiency, and mechanically attached the insulation to the steel roof deck using screws and plates. The white TPO membrane was then installed using bonding adhesive, and new edge metal flashings were added.

Straight A’s on the Report Card 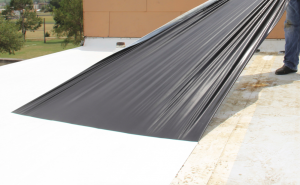 When Mule-Hide Products Co. Territory Manager Jake Rowell inspected the roofs, there were no items on his, or the district’s, punch list. The only remaining task — which was completed during the inspection — was covering the seams on the West High School roof with ballast; they had intentionally been left exposed for easy inspection. In fact, that was the only “to-do list” item Rowell noted during inspections of 11 Winkler Roofing projects that week.

“The quality of their work is phenomenal,” Rowell says. “The crews take pride in their work. They don’t just throw a project together and move on. They check their work to make sure it’s done right before I see it and before the customer sees it.”

Install EPDM in Temperatures from 20 to 120 F

You Can Influence Codes and Standards