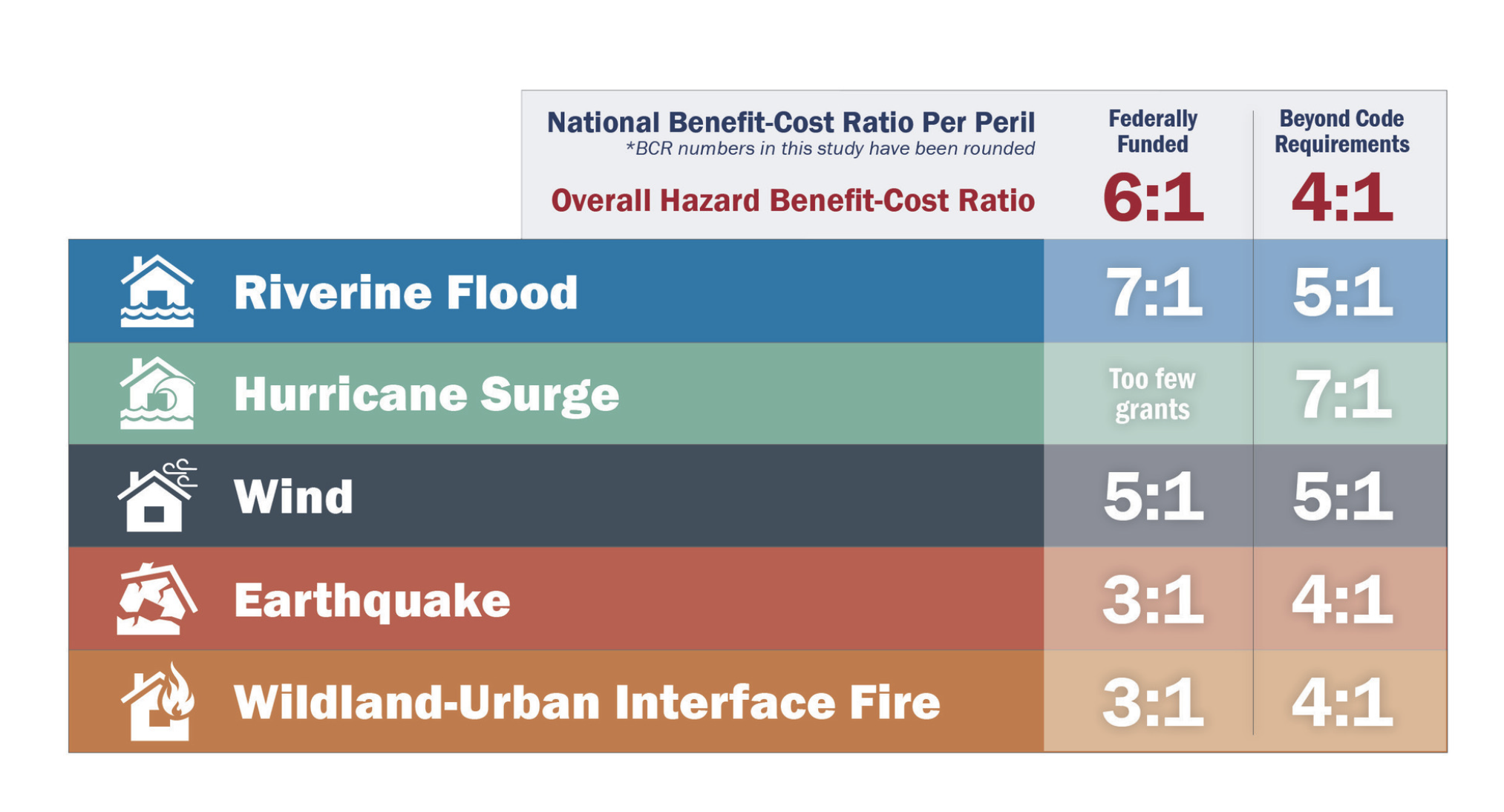 More than a decade ago, the National Institute of Building Sciences (NIBS), a nonprofit mandated by Congress to improve building process and facility performance, issued a landmark report which changed the conversation about the value of resilience. The 2005 report, Natural Hazard Mitigation Saves, was authored by NIBS’ Multihazard Mitigation Council (MMC), which promotes collaboration to achieve resilience objectives among a broad spectrum of stakeholders. Working from data provided by the Federal Emergency Management Agency (FEMA), the report found that every $1 of natural hazard mitigation funded by the FEMA between 1993 and 2003 saved the American people an average of $4 in future losses. That one to four ratio of investment to returns was widely quoted at the time that the report was published, and has been cited repeatedly during the past decade as interest in resilience grown. This report was among the first to demonstrate that investment in mitigation could deliver significant returns.

During the intervening years, as the frequency and severity of natural disasters has intensified, MMC leadership recognized the need to update and expand the 2005 study. Philip Schneider, AIA, Director of the MMC, explains that the “disaster landscape” has changed since 2005, necessitating a new report. “Our hazard maps, particularly, for earthquake and wind, have had several updates based on more research and better data. Our codes and standards are much improved for creating disaster resistance than they were over ten years ago. Our exposure to disasters, especially, building in disaster-prone areas, has increased substantially. We also have better methods for determining vulnerability to disasters than we had then, and more sophisticated economic analysis tools.’’ In fact, as part of the changed “disaster landscape” that Schneider references, 2017 set unwelcome records related to climate and weather events. According to a report released by the National Oceanic and Atmospheric Administration (NOAA) in early January, the U.S. experienced 16 separate billion-dollar disaster events, matching 2011 for the record number of billion-dollar disasters for an entire calendar year. Together, these events cost the country more than $300 billion dollars, a new annual record for the United States. While this data was released after the publication of the MMC report, it underscores the urgent need to lessen the financial impact of these increasingly frequent disasters.

Figure 1. Total costs and benefits of 23 years of federal mitigation grants. Courtesy of the National Institute of Building Sciences.

After a year-long effort, the MMC released its updated report in January of this year. Natural Hazard Mitigation Saves: 2017 Interim Report examined two specific mitigation strategies and found that mitigation is of even greater value now than it was when the first report was released. First, based on updated data on the impact of FEMA grants, the report stated that society now saves $6 for every $1 spent on mitigation. Looking at a second mitigation strategy, the report found a corresponding “benefit-cost” ratio of four to one for spending that exceeded select provisions of the 2015 International Code Council building codes. In summarizing its findings for both strategies, the MMC stated that, “Mitigation represents a sound financial investment.” (For the purposes of this study mitigation and resilience have similar meanings. Schneider says, “For both terms there is no one universal definition; they both are broadly defined with considerable overlap. However, resilience tends to be more community-based, taking into account a wider range of infrastructure, economic, environmental and social issues. Mitigation tends to be more building centric, but still can pertain to a subset or even the same set of wider range issues.”)

The report points out that while mitigation strategies deliver financial rewards, they would also provide other significant benefits. Implementing the two sets of mitigation strategies detailed in the report “would prevent 600 deaths, 1 million nonfatal injuries and 4,000 new cases of post-traumatic stress disorder in the long term.” Additionally, the report projects that designing new buildings to exceed the model ICC building codes would help fuel economic growth, “resulting in 87,000 new, long-term jobs, and an approximate 1 percent increase in utilization of domestically produced construction material.”

Figure 2. Total costs and benefits of new design to exceed 2015 I-Code requirements. Courtesy of the National Institute of Building Sciences.

The study reports that when the cost each group bears to mitigate a loss is subtracted from the positive benefits it enjoys, the “net benefit” is positive in each category. In other words, the value of investing in mitigation is spread broadly across the construction business and the people it serves.

The authors of the report are careful to point out that the cited benefit-cost ratios, or BCRs, are generated from two very specific mitigation strategies: those used by FEMA, and those incorporating designs that exceed provisions of ICC codes. Noting that the results from the 2005 study represented only a single, very narrow set of strategies but were incorrectly used to justify “all types of mitigation strategies,” the authors of the study specifically say that they did not provide an aggregate number in the updated study, but elected to provide BCRs for the two strategies individually. Moving forward, providing an aggregate number is definitely one of their goals: “Once the project team has identified BCRs for a sufficient number of mitigation strategies, it will provide an aggregated number representing the overall benefit of mitigation.” To help achieve that goal, multiple studies are being conducted by the MCC to examine the value of many kinds of natural hazard mitigation at the national level, and more studies are being planned, pending the acquisition of funding.

What do the results of this study mean for those who focus on the integrity of a roofing system to help create a resilient structure? Schneider underscores the importance of a resilient roof as a component of an overall mitigation strategy. “If the roofing system is compromised in either a windstorm or wildfire, the building or home is subject to total loss.” He also observes that achieving resilience, either in an entire community or in an individual structure, will be a combined effort. “Resilience will be best implemented when states and communities develop and effect resilience plans. Communities, particularly, need to address zoning. Codes and standards organizations need to constantly be updating their documents to address resilience, and architects, engineers, developers and contractors should be building to resilience standards. Manufacturers have their part in providing more resilient products and systems.”

The NIBS report is being praised as an important tool to help in decision-making about investment in resilience, and influential stakeholders are supporting its approach. Executive Director Paul Kovacs of the Toronto-based Institute for Catastrophic Loss Reduction says, “Findings of the 2005 report, that resilience offers a societal payback of $4 for every $1 invested in mitigation, made an extremely important contribution to the argument that building resilience towards natural hazards is not costly in the mid- to long-term and, in fact, offers a solid Return on Investment. The 4:1 ratio became the most commonly cited metric to show that resilience works, that such things as building codes work. The updated study released yesterday puts a finer point on the metrics and continues to offer overwhelming evidence that building resilience is key to avoiding death, injuries, property damage and disruption.”

Mike DuCharme, Chairman of the EPDM Roofing Association (ERA), adds support from the manufacturers’ point of view. “We know that our EPDM products can play an essential role in helping to create more resilient roofing systems. With this new report showing the economic advantages of resilience, we can provide the construction industry with materials that can not only enhance the performance of a resilient roofing system, but also provide financial advantages as well.”

The NIBS report concludes by pointing out that, “Not everyone is willing or able to bear the up-front construction costs for more resilient buildings, even if the long-term benefits exceed the up-front costs,” and suggests that some creative incentives might be needed “to align competing interests of different groups.”

FEMA, the source of the statistics for the NIBS report, is addressing this very issue and has just released its Draft National Mitigation Investment Strategy at the request of the Department of Homeland Security. This strategy is meant to address the lack of coordination in mitigation investment and is organized to achieve these six outcomes:

This Draft report is now available for comment and FEMA will continue to research the issue before releasing its final recommendations.

This increasing focus on the issue of resilience has moved the debate forward, beyond where it was just a year ago at this time. The question is no longer whether resilience is needed; the daunting statistics of 2017 confirm that cataclysmic weather events are on the increase and can cause staggering damage to the built environment. The NIBS report provides hard evidence that resilience is an investment in the future that will pay dividends for years to come. The debate now moves forward to the best ways to finance these mitigation efforts, so that those future dividends can be realized.