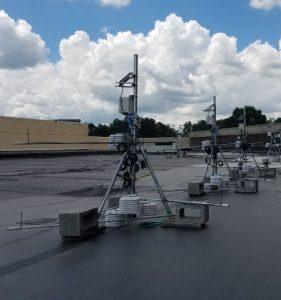 For much of the past decade, the debate over when and where to install reflective roofing has been guided by two basic assumptions: first, since white roofs reflect heat and reduce air conditioning costs, they should be used in hot climates. Second, since black membranes absorb heat, they should be used in cool-to-colder climates to reduce heating costs. This reasoning has been broadly accepted and even adopted in one of the most influential industry standards, ASHRAE 90.1, which requires reflective roofing on commercial projects in the warm-weather portions of the United States, Climate Zones 1–3.

But as reflective membranes have become more widely used, there has been a growing awareness that the choice of roof color is not simply a matter of black or white. Questions continue to be debated not only about the performance and durability of the different types of membranes, but on the impact of other key components of the roof system, including insulation and proper ventilation. The issue of possible condensation in cooler or even cold climates is garnering more attention. Given these emerging concerns, the roofing community is beginning to ask for more detailed, science-based information about the impact of reflective roofing.

One recent area of inquiry is centering on the impact of “the thermal effects of roof color on the neighboring built environment.” In other words, when heat is reflected off of a roofing surface, how does it affect the equipment and any other structures on that roof, and how might the reflected heat be impacting the walls and windows of neighboring buildings? Put another way, where does the reflected heat go?

To help answer those questions, the Center for High Performance Environments at Virginia Tech, supported by the RCI Foundation and with building materials donated by Carlisle Construction Materials, designed and implemented a study to compare temperatures on the surface and in the air above black EPDM and white TPO membranes. In addition, the study compared temperatures on opaque and glazed wall surfaces adjacent to the black EPDM and white TPO, and at electrical metallic tubing (EMT) above them.

Specifically, the Virginia Tech study was designed to answer the following questions:

To initiate the study, the Virginia Tech team needed to find an existing roof structure with the appropriate neighboring surfaces. They found a perfect location for the research right in their own backyard. The roof of the Virginia-Maryland College of Veterinary Medicine at Virginia Tech was selected as the site of the experiment because it had both opaque and glazed wall areas adjacent to a low-slope roof. In addition, it featured safe roof access.

In order to carry out the study, 1.5 mm of reinforced white TPO and 1.5 mm of non-reinforced black EPDM from the same manufacturer were positioned on the roof site. A 12-by-6-meter overlay of each membrane was installed adjacent to the opaque wall and a 6-by-6-meter overlay of each was installed next to the glazed wall. At each “location of interest”—on the EPDM, on the TPO, and next to the opaque and glazed walls—the researchers installed temperature sensors. These sensors were placed at four heights (8, 14, 23, and 86 centimeters), and additional sensors were embedded on the roof surface itself in the TPO and EPDM. Using these sensors, temperatures were recorded on bright, sunny days with little or no wind. The researchers controlled for as many variables as possible, taking temperature readings from the sensors on and above the EPDM and TPO on the same days, at the same time, and under the same atmospheric conditions.

The roof of the Virginia-Maryland College of Veterinary Medicine at Virginia Tech is the site of the experiment because it has opaque and glazed wall areas adjacent to a low-slope roof.

The output from the sensors showed that at the surface of the roof, the black membrane was significantly hotter than the white membrane, and remained hotter at the measuring points of 8 cm and 14 cm (just over 3 inches and 5.5 inches, respectively). However, the air temperature differences at the sensors 23 centimeters (about 9 inches) and 86 centimeters (just under three feet) above the surface of the roof were not statistically significant. In other words, at the site the air temperature just above the white roof was cooler, but beginning at about 9 inches above the roof surface, there was no difference in the temperature above the white and black membranes.

Elizabeth Grant led the team that designed and implemented the study. She says her findings show that you need to take the entire environment into account when designing a roof system. “You need to think about what’s happening on top of the roof,” she says. “Is it adjacent to a wall? Is it adjacent to windows? Is it going to reflect heat into those spaces?”

Samir Ibrahim, director of design services at Carlisle SynTec, believes the study results will help frame additional research. “These findings are an important reminder that the full impact of reflective roofing on a building and on surrounding buildings is not fully understood,” he says. “Additional research and joint studies, covering different climatic conditions, are certainly warranted to broaden the knowledge and understanding of the true impact on the built-environment.”

Horsepower Has a New Meaning on Historic Roofing Project