For Mark, it’s all about the applicator being familiar with his or her equipment. “The fan motors on some of the newer welders are larger, which means your gun is hotter,” he says. “Other hand-held welders don’t blow as much air. This means if an applicator picks up a new hand gun, there will be a learning curve to deal with. Ideally, this is addressed before the real welding begins.”

Education should always include safety training, notes Dave. “I feel that safety is job one and like the fact that there is a welder available that keeps you from having to walk backward and possibly off the roof,” he says.

What’s more, successful hand welding is a skill that involves individual technique, normally developed and refined over time. This means that operators should be proficient in different nozzle configurations, because the correct selection of welder temperature and nozzle width can have a significant effect on the quality of the hand weld.

“Not all guns run at the same temperature at the same heat setting, so I tell contractors to number their guns,” adds Mark. 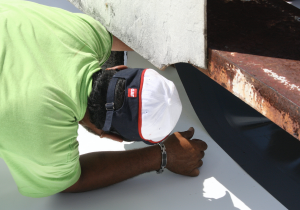 The ability to achieve satisfactory welds at various angles and in tight spots depends mostly on experience and training. Photo: GAF.

Christian agrees that education and communication between supervisors and crews can be vital because robotic welder performance varies by model and environmental conditions.

When welding in cold weather, the thermoplastic membrane needs to be “pre-heated” before the weld is compressed. While an automatic welder has holes in the nozzle that pre-heat the membrane, hand guns do not.
“When I watch most installers weld, they hold the roller too close to the nozzle, which does not allow the membrane to pre-heat,” says Mark. “I suggest they keep the roller at least 1 or 2 inches away from the tip.”

The ability to achieve satisfactory welds with the hot-air welder being held in either hand facilitates welding at various angles and in tight spots. Because few installers are ambidextrous by nature, it’s mostly experience with these types of details that counts. And therein lays a major problem for roofing contractors in general—finding and keeping qualified labor.

“Just putting a probe to a seam will not ensure against leaks, especially in colder weather where roofs do not ‘probe out’ as well,” says Mark. “It’s the training of installers that is most critical to the watertightness of the roofing system.”

When hand-welding with a roller, finger pressure is often used to place and “tack” the upper piece of membrane into position. However, a hard silicone roller must always be used for final welding. Tack-welded field seams will not pass inspection.

The membrane is typically heat-welded together using the “two-pass” method. The installer welds from the interior of the seam on the first pass and finishes the weld with the second pass.

The nozzle is placed between the two layers of membrane, and the roller is used to compress the membrane and create the bond. Ideally, welds should be continuous, without voids or partial welds.

Sounds simple, doesn’t it? It can be, unless your body is contorted around a raised pipeline, it’s 100 degrees Fahrenheit in the shade, and a hot wind is picking up all kinds of potential seam contaminants and blowing them in your direction. Defects are usually corrected by heat welding another layer of reinforced membrane over the deficient weld area the same day, assuming the interior of the seam has not been contaminated.

Roofing professionals know all about the importance of setting up robotic welders and performing test welds before going into action in the morning. However, membrane manufacturers would like to see crews test weld at the beginning of every work period, including when returning from lunch in the afternoon. They also recommend testing when there’s a significant change in the weather, including changes in air temperature, wind speed, cloud cover, etc.

For initial automatic hot-air welder settings, one expert recommends the formula below. It is not foolproof, but is a good starting point under average weather conditions:

“If an applicator anticipates a large swing in ambient temperature from hot to cold—think Chicago in fall—he can set the welder closer to the 1.5-inch weld setting,” says Dave. “This way, as the temperature drops the weld will stay within the manufacturer’s required seam width parameters.”

Typically, membrane manufacturers want to see delamination of a test seam of a least 1 inch but not more than 1.5 inches.

Dave estimates that a conscientious contractor will perform at least two test welds per day. “In a worst-case scenario, they realize that what worked yesterday might not work today,” he says.

Many factors will affect welder settings, including membrane type (TPO, PVC) and thickness. “TPO and PVC weld differently,” says Dave. “You want to be running the welder hotter with PVC and see smoke and bleed-out at the edge of the seam. If you smoke or bleed-out TPO, you’ve overheated the sheet and pretty much compromised the weld.”

Example scenario: Begin by setting the welder speed at 10 FPM and the temperature at 600°F, and do a test weld. Bump the temperature up to 700°F while keeping the welder speed at 10 FPM and perform another test weld. Continue with this process in 100°F increments, keeping the speed the same until the machine is maxed out (typically 1,148°F) and find the weld window. Then set up the machine to the middle of that weld window.

Finally, weld the two 18-inch pieces of membrane together at the agreed-up setting and allow the membrane to cool for at least 10 minutes. Cut 1-inch-wide strips across the 18-inch welded membrane and test each weld by applying enough pressure to cause the seam to peel apart.

An acceptable weld will fail by exposing the scrim reinforcement, otherwise called a “film tearing bond.” A partial weld will fail in a peel test by a partial separation between the two layers of the membrane. 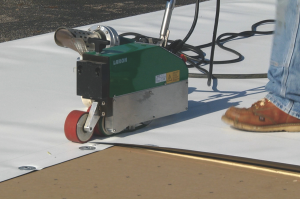 Finally, a “cold” or “false” weld will fail by a full separation between the two layers of membrane.
“You can put the sample on an Instron machine (in a test facility) for greater precision,” says Dave, “but a properly-performed peel test conducted on the roof is usually satisfactory.

Physical probing involves the use of a blunt pointed seam probe such as a dulled cotter pin puller. The weld must be allowed to cool before being probed. The probe tool is pressed with some force against the weld edge and drawn along the seam. The probe tool will enter into the heat weld area between the two layers of membrane at locations where the seams are partially welded and a “void” is found. The probe tool can then be used to follow the problematic seam area until a solid (spec) weld is encountered.

The roof inspector may also ask to see test welds and conduct probes and visual observation, but most manufacturers avoid destructive testing when monitoring seam strength on a roof install.

“Welding performance over the years has improved as a result of active communication and training,” concludes Christian. “In particular, training on the welding window and machine setup have been the drivers of improved welding performance.”

Michael Russo is a consultant to various roofing manufacturers and industry associations. He was the editor of Roofing/Siding/Insulation Magazine from 1980 to 2005. Russo has been reporting on the low-slope roofing industry for more than 36 years.

PVC System Is the Answer for U.S. Bank Stadium Roof