A number of recent articles have explored the relationship between temperature and R-value with an emphasis on the apparent reduction in R-value demonstrated by polyisocyanurate (or polyiso) roof insulation at cold temperatures. The science behind this apparent R-value decrease is relatively simple: All polyiso foam contains a blowing agent, which is a major component of the insulation performance provided by the polyiso foam. As temperatures decrease, all blowing agents will start to condense, and at some point this will result in a marginally reduced R-value. The point at which this occurs will vary to some extent for different polyiso foam products. 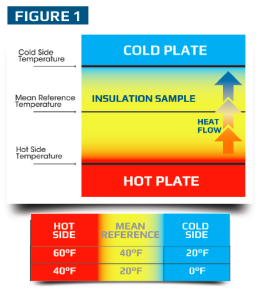 Because of this phenomenon, building researchers have attempted to determine whether the nominal R-value of polyiso insulation should be reduced in colder climates. Because of the obvious relationship between temperature and blowing-agent condensation, this certainly is a reasonable area of inquiry. However, before determining nominal R-value for polyiso in colder climates, it is critical to establish the appropriate temperature at which R-value testing should be conducted.

NOW THAT we’ve had an opportunity to discuss the details of R-value testing, let’s apply the principles of the laboratory to the real-world situation of an actual building. Just like our laboratory hot box, buildings also have warm and cold sides. In cold climates, the warm side is located on the interior and the cold side is located on the exterior. If we assume that the interior is being heated to 68 F during the winter, what outdoor temperature will be required to obtain a mean reference temperature of 40 F or 20 F? Figure 2 provides a schematic analysis of the appropriate mean reference temperature. 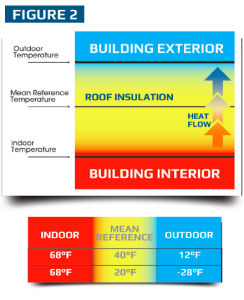 A Schematic analysis of the appropriate mean reference temperature.