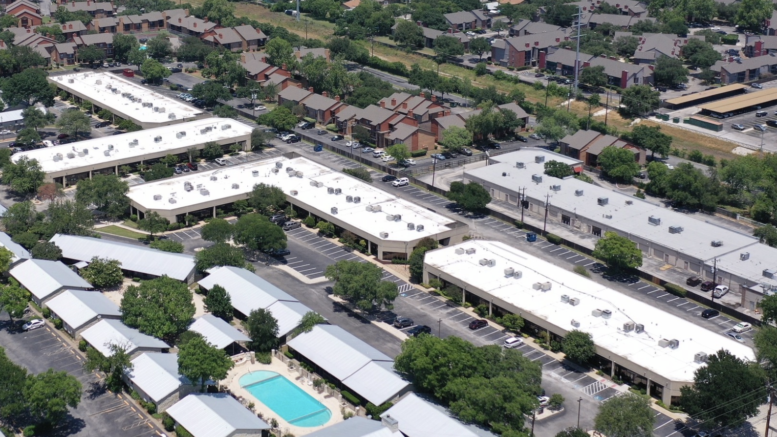 The Marymont Technology Park, a 100,000-square-foot complex in San Antonio, Texas, is home to a wide variety of businesses and community service offices. When the complex was experiencing roof leaks, they needed a specialized solution so tenants could continue to conduct business as usual.

Market Makers Inc., a Houston-based firm that specializes in residential and commercial roofing sales and design, was called to assess the roof and make recommendations on repairs or replacement. An initial inspection revealed that the roof had been coated with an asphalt-based product. Market Makers made several trips to the project site and did multiple core samples to determine the existing roof system, layers of roofing, and deck type.

It turned out that underneath the coating, the existing roof was about 80 percent built-up tar and gravel and 20 percent granulated modified membrane. The core samples revealed what would ultimately be the project’s biggest obstacle — a specialized roof deck that consisted of a light-gauge corrugated metal with a half-inch gypsum board mechanically attached to the metal. The deck had experienced a lot of wear and tear over the years and was not a suitable substrate for mechanically attached systems, and fully adhering another roof over the coating was out of the question. Tearing off the roof down to the deck would have compromised the deck and repairs would have been exorbitant. Further complicating things were the numerous skylights, HVAC units, drains, and scuppers on the roof.

Market Makers originally thought that the best solution was to completely remove the roof, including the deck, and install a new metal deck with a mechanically attached Versico TPO single-ply roof. However, these extensive renovations were significantly over the client’s budget, so it was back to the drawing board.

Luckily, Market Makers had an alternate solution — Versico’s VacuSeal V2T system. VacuSeal V2T is a wind-ballasted engineered system that is loose-laid over the existing roof with no penetrations into the roof or the decking substrate. The assembly uses special vents that harness the power of the wind to lock the roof membrane in place, and it can be great for retrofit and monolithic deck applications.

It turned out that the Marymont Technology Park was a good candidate for a VacuSeal roof, which was much less expensive than tearing off the old roof and deck and starting from scratch. VacuSeal systems are quick and easy to install and help save money and labor by substantially reducing the amount of glue, ballast, or fasteners a project requires.

Absolute Roofing & Waterproofing, with offices in Austin and the Dallas-Fort Worth area, was the contractor selected for the project. The company is specifically focused on large commercial projects and has partnered with developers, architects, and general contractors to provide services ranging from complete roof recoveries, new construction, leak repairs, and annual preventative maintenance.

Versico’s DuraStorm VSH Cover Board was chosen for this project, which is an engineered composite building material sourced from post-industrial and post-consumer waste streams and offers an ultra-high compressive strength of 3,990 psi in addition to achieving FM’s Very Severe Hail approvals. The crew began by laying out Versico’s DuraStorm VSH Cover Board directly over top of the existing roof, placing the Distribution Strips for the vents, then rolling out the VersiWeld TPO membrane on top of the cover board. The crew then marked the membrane at the predetermined locations for the V2T Vents. At each location, they cut and removed a 5-inch circle of TPO membrane, aligned the V2T Vent, and flashed it before moving on to the next. Everything was loose-laid; the only securement was along the perimeter into the parapet walls and around the HVAC units and skylights.

The 100,000-square-foot re-cover project was completed in about two months. “Installation throughout this project was smoother than most,” notes Guess. “Versico and V2T were available for the entirety of this project, and it’s a true testament to what trade partners are about. We were a bit skeptical of the V2T system at first, but in the end were very impressed. The roof ‘sucked’ down to the DuraStorm board and was so smooth in the end. This was also our first time using DuraStorm board and it is now our recovery board of choice.”

Rodriguez summed up the project by saying, “With nothing penetrating the deck and not having to fully adhere anything on the roof surface, we were able to provide a roofing solution that not only made sense structurally, but also monetarily.”