Wind damage to roof systems is often catastrophic, placing the building users at a life-safety risk, resulting in interior and furnishing damage and suspension of interior operations, loss of revenues, legal ramifications and great costs to repair. Because of my 30 years of experience in the design of roof systems and forensic investigation, I’m often called upon as an expert witness after wind events. In this article, I’ll review a couple wind-event roof failures, the causes of the failures and how they could have been prevented. I’ll also provide recommendations for failure prevention in the design process for new roof systems, as well as for existing roof systems. 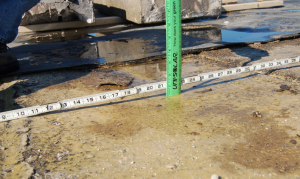 1. The concrete roof deck panels deflected more than 3/4 inch, which the design architect should have accounted for if a thorough field investigation
was undertaken.

How can it be that when roof systems are to be designed for code-required wind-uplift resistance that so many fail in winds well below the design parameters and/or warranty coverage? The answer could be design-related, material or installation; typically, it involves all three.

Architects and some roof system designers are often not as knowledgeable about roof systems as they should be, have little empirical evidence in how all the components work together as a system, and move beyond their abilities (a violation of their standard of care) when designing roofs where specific detailing is required. In addition, manufacturers are all too often
bringing new products to the marketplace that have not been properly vetted in the field and their long-term performance is truly unknown. Unfortunately, the roofing contractor cannot escape any of this. The lack of proper specification and contract document review; failure to review product data, including installation guidelines for new products; poor project oversight and management; and pressure from general contractors often result in installations that are subpar. The result is a “perfect storm” of design, materials and installation that fail under stress.

Consider the following case studies that I have been involved in as a forensic or “expert” witness when litigation was involved.

A large aged warehouse along the eastern seaboard was in need of a new roof system. Because the interior was not conditioned, thermal insulation was not required. The existing roof was an asphalt built-up with aggregate surfacing on high-density fiberboard on precast concrete panels 24-inches wide on a steel structure. The northern portion of the building had overhead doors that were seldom closed. On the interior, an aedicule structure (a building within a building) was constructed approximately 65-feet south of the overhead door, which had a ceiling level 5-feet below the roof deck. 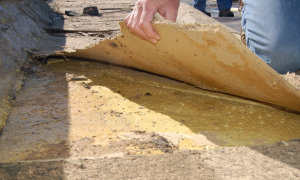 2. The thin, flexible 1/2-inch-thick high-density board was found to have little, if any, contact with the full-coverage spray-foam adhesive, making uplift extremely easy.

Additionally, the architectural drawings called for rooftop relief vents to be removed and capped over.

Around June 2008, a Nor’easter (an intense rainstorm), coming in from the east off the ocean, swept into the city. This resulted in the new roof system being lifted off the roof deck. Mode of failure was the fiberboard detaching from the precast concrete roof deck.

Investigation revealed several acts and conditions that contributed to the wind damage.