Varying degrees of moisture entrapment to no surprise were encountered between the roofing “layers”, and the fiberboard insulation was saturated. The surface of the poured gypsum roof decking to no surprise was also visibly damp at some test-cut locations. 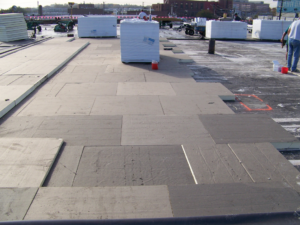 The roof insulation component of the replacement roofing construction would be comprised of 20 psi polyisocyanurate foam insulation. The roof insulation system design, combined with the poured gypsum roof decking, would have a minimum R-value as necessary to comply with the prescriptive requirements of the Connecticut State Energy Conservation Construction Code.

The degree of roof slope present in the structure was determined to be nonexistent. Tapered roof insulation, therefore, was integrated as part of the replacement roofing construction to supplement the existing deck slope to ensure efficient stormwater removal (drainage) and compliance with the Connecticut State Building Code, which requires a minimum 1/4-inch-per-foot slope.

The replacement roofing specified for the project entailed a fully adhered 60-mil EPDM membrane system and included a 20-year full-system warranty. EPDM was considered to be the most viable/economical alternative for this application. The large expanse and limited quantity of roof penetrations/equipment better suited the use of EPDM for the project.

Known sections of deteriorated roof decking (those areas visible from within the building exhibiting through-deck deterioration) were identified on the roof plan drawing and first removed for safety purposes; trafficking over the weakened decking sections was a principal concern because the deteriorated state of the gypsum decking wouldn’t likely be capable of supporting any appreciable construction load or personnel. 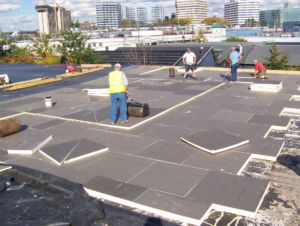 The roof insulation panels were “walked-in” immediately following placement and periodically “rolled” with a counterweight to ensure a satisfactory bond to the deck.

A thorough visual examination was performed of the poured gypsum roof decking immediately following each phase of roofing removal. Any decking sections with excessive moisture entrapment or areas otherwise deemed to be structurally unsound were removed and replaced with metal decking.

A containment system, comprised of wood planking, plywood and polyethylene sheeting inserted between the roof purlins was devised to prevent dust and debris migration into the building and also act as fall protection at each replacement roof deck section. The containment system was effective and greatly minimized dust/debris migration into the building during the construction activities and also served as a suitable working platform.

Michael Fischer is the Washington, D.C.-based Roof Coatings Manufacturers Association’s director of codes and standards. He is a member of the International Code Council and the ICC Industry Advisory Committee, as well as ASTM International.

Be the first to comment on "After Years of Roof Leaks, a Laboratory That Produces Theatrical Equipment and Software Undergoes a Complex Reroofing"