Working with the unique variables of a region and its climate poses a significant challenge to roofing contractors. Installing a roof system that looks beautiful and can stand up to ice, snow and freezing temperatures takes an expertise that only comes with experience. This is the case in the snowy and picturesque mountains of Park City, Utah. The city is a winter haven for skiers who vacation there, but the extended snow and cold season can deliver a beating to a roof. 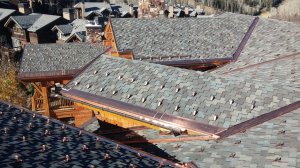 The concrete tile roof and poorly ventilated deck were causing major problems for the building owner, not to mention the residents who live and rent there. Heat was escaping through the roof, causing the snow to melt and refreeze at the eaves.

The Grand Lodge at Deer Valley Resort, a luxury condominium development at one of North America’s top-ranked ski resorts, sits at an elevation of 9,000 feet in the mountainous area. Along with the breathtaking views comes an average annual snowfall of 350 inches. As a result, the 40,000-square-foot concrete tile roof of the lodge had begun to fail after only six years of intense weather and needed to be replaced immediately.

The concrete tile roof and poorly ventilated deck were causing major problems for the building owner, not to mention the residents who live and rent there. Heat was escaping through the roof, causing the snow to melt and refreeze at the eaves. Dangerous icicles would form, and noisy chainsaws were frequently needed to cut through the ice on the 5-story building. In 2013, the owner of the condominium decided to completely redesign the roofing system. IronClad Exteriors Inc., a Sandy, Utah-based roofing company had successfully installed roofs for Deer Valley in the past and was contacted by Deer Valley Resort Management to consult on the new design.

“Due to insufficient insulation and poor ventilation on the existing roof, ice dams were forming, tiles were cracking and the roof was falling apart,” says Eric Kircher, owner of IronClad Exteriors. “There was an architect involved in redesigning the roof … . I was asked to take a look at the design, and I recommended an asphalt shingle roof instead.

Kircher advised that a full asphalt roofing system with proper insulation and moisture protection would be able to withstand the harsh weather of the ski resort.

“Asphalt was the ideal material for the reroof for reasons that involve aesthetics, safety, and the long-term health and viability of the roof,” he notes. “I recommended a shake style because it really fit the architecture and look of the roof while being able to protect the building and residents from the weather conditions.” 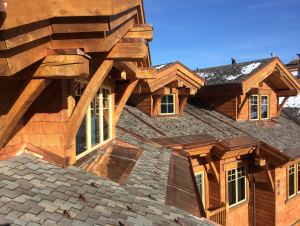 Over the span of six months, IronClad Exteriors tore off the tile roof and installed a system they had used many times to help homeowners in the area protect their homes from ice and snow.

Over the span of six months, IronClad Exteriors tore off the tile roof and installed a system they had used many times to help homeowners in the area protect their homes from ice and snow. FlintBoard ISO NB (Nail Base) Composite Polyisocyanurate/OSB Roof insulation was installed over the plywood deck, followed by a 3- by 10-inch fascia board. WinterGuard HT advanced waterproofing underlayment and DiamondDeck High Performance Synthetic Underlayment were then added to provide important moisture resistance. Finally, the Presidential Shake TL asphalt shingles provided a beautiful look that matched the lodge’s breathtaking surroundings. The project was completed in November 2014.

The Grand Lodge’s new asphalt roof also contains a unique feature that sets it apart in form and function. IronClad installed 11,000 copper snow guards that offer another layer of weather protection. Snow freezes around the copper pieces and keeps it from sliding down the roof to form dangerous ice dams at the eaves. Lodge residents no longer have to walk underneath potentially hazardous icicles or listen to the sounds of manlifts and chainsaws that are used to remove them.

“The roofing system we designed had the unique ability to withstand that type of cold environment,” Kircher notes. “There will be no heat loss contributing to ice and snow on the eaves, and the insulation protects the interior of the lodge. These are high-end condominiums with finished ceilings and no attic space at the top where you can put more insulation, so the insulation had to be installed on the existing roof deck to prevent ice dams.”

The installation process went smoothly despite the challenges brought on by Park City’s weather. Snow can begin to fall as early as September and lasts through the spring, providing little time for construction projects to take place. Fortunately, IronClad had extensive experience with the roofing systems needed in Park City.

James R. Kirby, AIA, is director of Codes and Regulatory Affairs for the Kellen Co. He is a licensed architect in Illinois and has a Master of Architecture—Structures Option and a Bachelor of Science in Architectural Studies from the University of Illinois. Kirby also has a Graduate Certification in Sustainable Building Design and Construction from Boston Architectural College. Kirby has expertise in roof system design and construction, weatherproofing and energy-efficiency of the building envelope, as well as rooftop PV systems. He also is an accredited Green Roofing Professional. Kirby has a strong combination of association experience, as well as roofing expertise, which help serve the Asphalt Roofing Manufacturers Association (ARMA) and the Roof Coating Manufacturers Association (RCMA), among others.