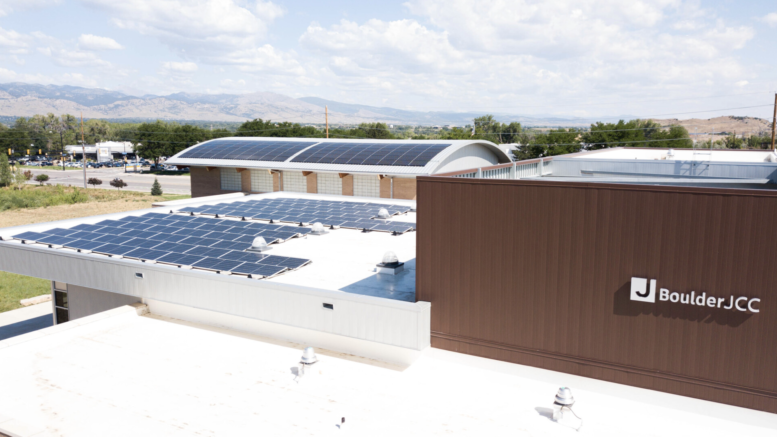 The 52,444-square-foot Boulder Jewish Community Center (Boulder JCC) was conceived as a contemporary interpretation of sustainable design. The campus was designed and built by Colorado-based RB+B Architects and Calcon Constructors, who desired to create something beautiful, functional and unique. Construction included a wing for daycare and education, a gymnasium and fitness center, a full commercial kitchen, a community hall with a state-of-the-art stage, a library, administrative offices and a large outdoor gathering area, complete with a fireplace.

The Boulder JCC is a 501c3, nonprofit organization. Sustainability, energy efficiency and education are priorities for its members. The goal was to incorporate rooftop solar during the initial construction, but the budget wouldn’t allow it. After the complex was built, the challenge was to find a cost-effective photovoltaic (PV) solution that presented a solid return on investment, which would make the project a no-brainer from a financial standpoint.

The Solar Revolution, a PV system designer and installer located in Boulder, was there to help. Doug Claxton, principal and founder of The Solar Revolution, advised the Boulder JCC that grants from the City of Boulder and Boulder County were available for helping nonprofits go solar. The high visibility of the PV system and the educational opportunities afforded by solar power were important to both the Boulder JCC and the grant committees, and the project was approved.

The Boulder JCC now has a 74.4kW PV array located on multiple rooftops, including the highly visible and gently curved standing seam metal roof and a low-slope TPO roof. In addition to solar on the main facility, a 7.2kW array is installed on the adjacent barn at the “Milk and Honey Farm.” The farm is 100 percent powered by solar and serves as a valuable tool for the Boulder JCC’s educational and preschool programs.

Work on the project was done in phases, beginning with the Firestone UC-3 double lock standing seam metal roof over the gymnasium. “We did the solar on the metal roof first because that’s the most cost-effective place to do it, using S-5!’s clamps and PVKIT,” notes Claxton. “So, we did that, and then a year later, another round of grant money was available, so we were able to do even more solar up there on the flat roof.”

Installing solar panels on the roof would provide excellent visibility and have a lower initial cost than the low-slope roof sections. “That’s one reason we actually won the job, along with the grants,” Claxton recalls. “We quoted it and when they saw the number, they said, ‘That’s much less expensive than we had anticipated.’”

The key to the metal roof installation was the S-5-PVKIT 2.0, which provides a simple, secure, economical method for attaching solar modules with no penetrations. The PVKIT’s pre-assembled components enable installers to directly attach PV modules to the roof’s standing seams using S-5! clamps and brackets, which is faster and more economical than a traditional rail mounting system.

“I think a standing seam metal roof is hands down the best roof for solar just because of the fact that we don’t penetrate, and it installs so quickly,” Claxton says. “What’s unique about the S-5! system with their PVKIT is that we don’t use a traditional support rail underneath the panels. With the S-5! kit, the panels rest right on the kit. You eliminate the rail, so you cut your material costs down quite a bit. You also cut the labor cost quite a bit.”

The installation method eliminates concerns about violating the manufacturer’s warranty. “In order to route the power from the roof down, we just did a conduit detail around the eave,” says Claxton. “In this case we didn’t penetrate the roof and the steel deck at all. And we got all those solar panels on in two days with a four-man crew. It’s really pretty darn simple.”

When solar was added to the flat roof, The Solar Revolution developed a hybrid system using both ballast and mechanical attachment. “We installed the Ecolibrium system, which is a ballasted solution that uses concrete pavers to essentially weigh the system down,” Claxton explains. “In this case, though, with our windspeeds being as high as they are, we introduced about a dozen mechanical attachments interspersed throughout, and that allowed us to get the designed windspeed without making the system too heavy.”

Attachments were made using the U Anchor 2400 from Anchor Products, which is fastened to the deck and features TPO flap that’s bonded to it. “What we do is zip it in and have a roofer come in right after us and weld the TPO down,” Claxton says. “For every attachment we do, it eliminates the need for 420 pounds of concrete block, so it helps us keep our ballast weight in check on these systems. It gives us a lot of peace of mind that the system is not going anywhere. Even though we have to penetrate, it’s such a good flashing detail that I would argue it’s better than any pipe jack out there in terms of its watertightness.”

The solar installations went smoothly, according to Claxton, and The Solar Revolution is preparing another grant application for the third phase of the project.

“The only challenge was working around a facility that has events going practically 24-7,” he says. “We had to make sure we were being safe, especially working in areas above people. There were no real challenges other than coordinating the work in an operational facility.”

According to Claxton, the project illustrates the company’s strengths, which include finding the optimal way to design and install the PV system. “We were the only company to propose utilizing the standing seam metal roof,” he says. “We are very good at analyzing the site and finding the best solution, which isn’t always the most obvious solution. That standing seam is like a barrel vault — it has a gentle curve to it — and a lot of companies don’t think to use that because of the curve, but the S-5! system allows us to contour that curve perfectly.”

The aesthetics of the solar system were an important consideration as well as ROI. “Again, the JCC is doing solar because they also want it to be a learning tool, and the city’s grant wants it to be visible, so by using the metal roof we achieved the goal of visibility,” says Claxton. “They are putting solar all over their campus so they can reduce their energy costs and have more money to put into these early childhood programs. They also help educate kids on renewable energy and sustainability. It’s all part of their mission. As a nonprofit, anything they can do to reduce their energy costs is beneficial.”

Be the first to comment on "At the Boulder JCC, Rooftop Solar Fulfills Several Key Priorities"