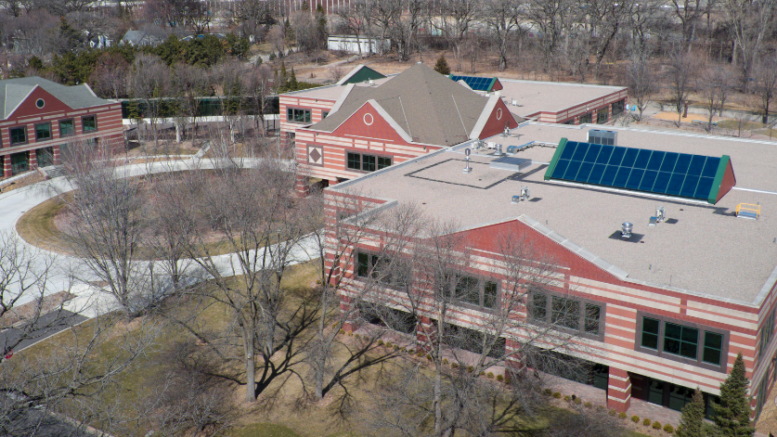 Located on East River Parkway in Minneapolis, the 116,000-square-foot Masonic Institute for the Developing Brain opened to the public in late 2021. When members of the Masonic Fraternity of Lodge 98 laid the cornerstone for their building in 1922, they could hardly have dreamt what would happen to their location a century later.

Thanks to initial funding of more than $35 million from Minnesota Masonic Charities, the institute now focuses on the early diagnosis, prevention, and treatment of neurodevelopmental disorders in early childhood and adolescence. But first the complicated structure needed top-to-bottom rebuilding — inside and out.

The University of Minnesota purchased the 10.2 acre property in January of 2020. A two-level building was redeveloped to include clinics, research facilities, tele-outreach, a dedicated community center, family-friendly spaces and conference areas. Previously used as the Shriners Healthcare for Children campus in Minneapolis, the land and structure were acquired with the express desire to create the Masonic Institute for the Developing Brain.

“The scope of the project was basically a full renovation of the building,” says Bryce Frandrup, project coordinator, University of Minnesota. “This included demolition and rebuilding of interior walls, new electrical and mechanical systems, and a total roof replacement.”

Knutson Construction was hired as general contractor to oversee the renovation. They brought in Central Roofing Company to install a new roof over the remodeled structure.

While the previous roof on the facility was just 20 years old, the decision was made to replace it at the same time as rehabbing the interior.

“We won this roofing project because of our existing relationship with both the University of Minnesota and Knutson Construction,” says Mike Mehring, vice president of commercial roofing with Central Roofing Company. “The university made the sensible decision to renovate the roof now rather than wait until it started failing. With no occupants in the building, it was the ideal time to do the roof replacement.”

For a fully-adhered EPDM roof system, Johns Manville 60-mil reinforced EPDM was installed, plus the same insulation and cover board as the other roofing systems. A self-adhering vapor barrier was also added. Gas and electrical conduits were set on rubber pipe support blocks above the roof structure.

The Central Roofing team worked through difficult winter weather conditions to stay on schedule. They met the challenges associated with installing the new roofing systems to the existing parapet wall without touching or damaging the top.

“Central Roofing was proactive in investigating, addressing and reviewing every challenge they discovered to ensure educated decisions were made,” says Trevor Dickie, project manager with Capital Project Management at the University of Minnesota. “The unique circumstances of COVID implications, a winter installation and material ordering delays made this a very demanding project. Despite all of this, Central Roofing completed the roof within an acceptable timeframe and within budget.”

Central Roofing Company has a long-term relationship with the University of Minnesota’s Twin Cities Campus. The roofing team inspects, evaluates and fixes roof on more than 280 university buildings each year. This allows officials to give approval on small fixes that are needed immediately, along with planning out for full roof replacements. In addition, Central Roofing Company replaced the roofing systems on the Hubert H. Humphrey School of Public Affairs in 2019.

“Our team is always pleased to work on projects related to the University of Minnesota,” says Mehring. “For this particular structure, we’re proud to provide a roof over a location that now helps people understand, prevent, diagnose and treat neurodevelopmental disorders in young children and adolescents.”

Cover Board: Fesco Board, Johns Manville