To expand its services and make it easier for patients and visitors to navigate its facility, Gordon Hospital, Calhoun, Ga., underwent a $37 million expansion. The project added 59,000 square feet of hospital space, renovated 11,500 square feet of space, and created a new patient tower entrance to separate inpatient and outpatient service entrances. The various aspects of the project included 11 different roof areas, so the project’s general contractor, the Atlanta office of Birmingham, Ala.-based Brasfield & Gorrie, brought Atlanta’s Diamond Roofing Co. into the project during concept design. 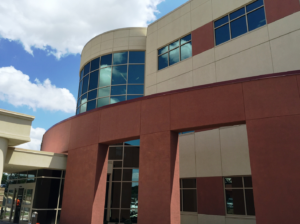 The architects designed all the curves and unique walls to make the campus beyond ordinary and give the hospital a certain appeal.

“The hospital addition and renovation was still just a sketch and a narrative, and we worked together to understand the owner’s needs and architect’s intent,” says Dave Mossige, Diamond Roofing’s president. “Roofing systems have be- come very complex over the years and it really does take a roofing specialist to navigate the numerous options and decide the best roofing systems for the project.”

Having the roofing contractor onboard from inception also helped with staging. When it became apparent that two canopies between the new and existing buildings would pose significant challenges with materials’ access, the team was able to plan ahead and stock-pile materials near the area months pri- or to needing them.

Because this was a fast-track project, 10 to 15 crew members worked across multiple roof areas. “All the other trades come in behind us once we have the roof ready, so getting the roof area dried-in was key to the schedule,” Mossige says. “That’s why we chose a more durable two-ply modified bitumen rather than a single-ply system for the roofing. Disturbances that happened to the base while the trades were working off the roofs could be quickly and easily repaired before we applied the cap sheet.”

The roofing areas added up to 25,400 square feet of space, including the main roof, penthouse and various other canopies. The main roof on the new addition was unique because it was divided into two portions: one with a steel deck and another with a concrete deck for future vertical expansion. The concrete deck was 5-inches higher than the steel deck.

To make the steel deck meet the thickness of the adjacent concrete deck for a level roof, Diamond Roofing’s team mechanically fastened 5 inches of polyisocyanurate insulation on the steel and then installed a 1/4-inch-per-foot-total tapered ISO system. The team then applied a cover board to increase the system’s wind rating and provide better adhesion of the base ply. The tapered system and cover board were set in ribbons of low-rise foam adhesive. The next layer was an SBS modified bitumen as a cold-process adhesive and then a fire-rated granular cap sheet, also set in a cold-process adhesive. 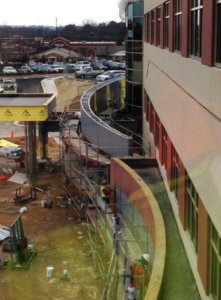 Although Diamond Roofing has a sheet-metal shop in which team members fabricate edge metal, it worked with a supplier to source prefabricated edge metal that had been formally tested to meet or exceed the hospital’s required FM 1-105 criterion.

Although Diamond Roofing has a sheet-metal shop in which team members fabricate edge metal, most of the roofing firm’s product is equivalent to a wind rating of FM 1-60 and FM 1-90. FM approval ratings apply to uplift pressures in pounds per square foot. Hospitals are constructed to stricter standards, however, and officials at Gordon Hospital wanted to ensure an FM 1-105 approval rating. Diamond Roofing worked with a supplier to source prefabricated edge metal that had been formally tested to meet or exceed the FM 1-105 criterion.

The edge metal needed to be a heavy gauge of 0.063 prefinished aluminum with a protective Kynar 500 resin-based coating. The architects also wanted welded mitered corners. In certain places on the roofs, unusual radiuses and slopes—occasionally joining with straight coping at offset angles—meant some inside and outside miters had to be exactingly produced for odd angles like 104 and 140 degrees.

For example, on one parapet, two different elevations come together at a corner, making precision critical for the manufacturer and installer. “When you are dealing with preformed metal, you have to be precise,” Mossige notes, “but when you’re doing a raised, offset miter, you have to be perfect.”