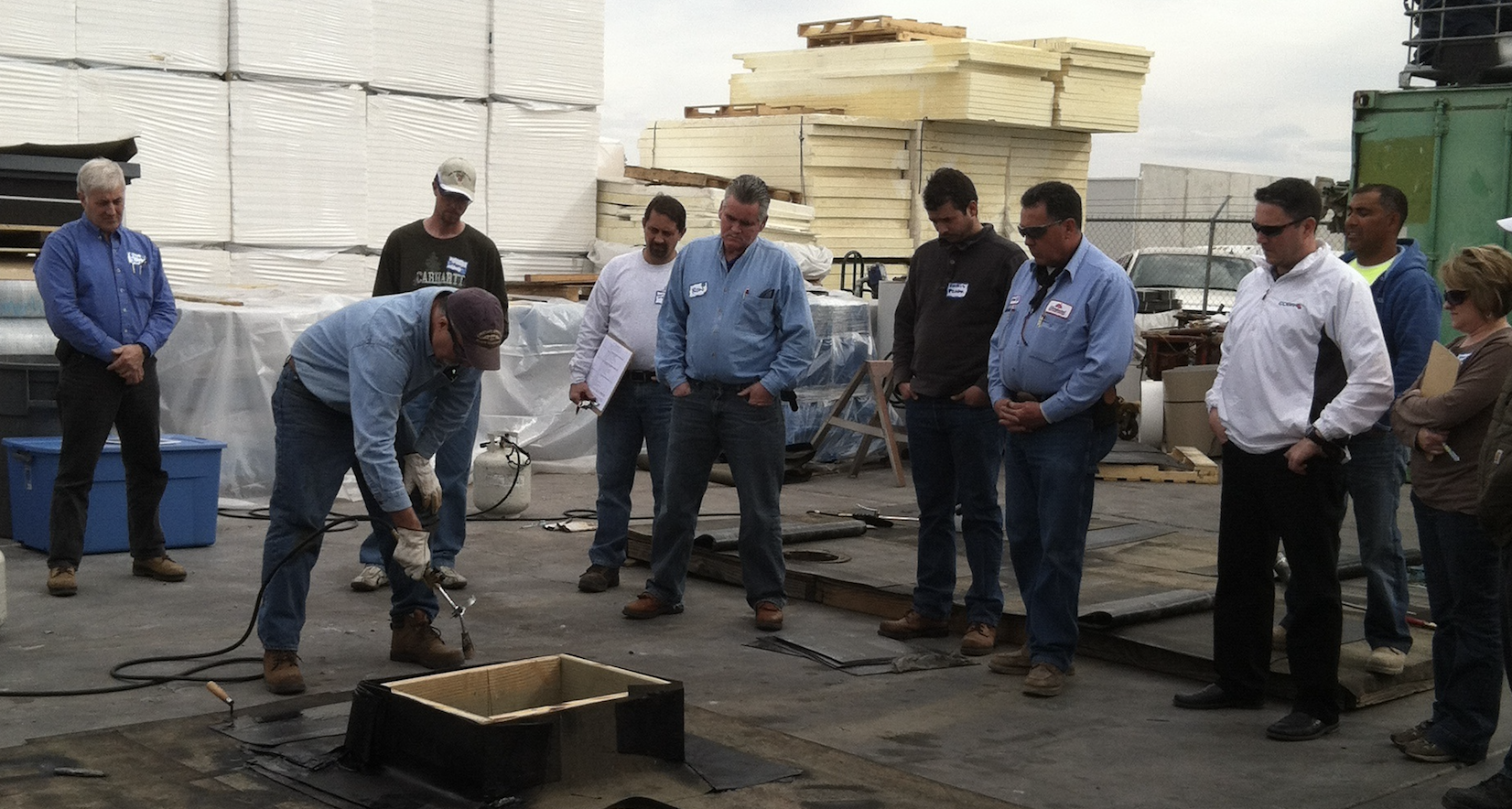 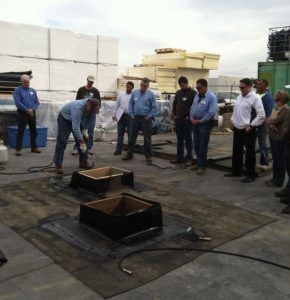 The latest market survey conducted by the National Roofing Contractors Association (NRCA) shows the use of polymer modified bitumen as a percentage of all new roof systems, installed both in new construction and re-roofing projects, comprises about 10 percent of the total low-slope market, according to members responding. The significance of that share of the market for polymer-modified bitumen also highlights the importance of proper training in the use of roofing torches, the most common method for installation of such systems.

In 1986, the Midwest Roofing Contractors Association (MRCA), in conjunction with industry organizations, the Asphalt Roofing Manufacturers Association, and the United Union of Roofers, Waterproofers and Allied Workers, developed a curriculum to train roofing workers in the safe application of torch-applied roof systems. This program was named the Certified Roofing Torch Applicator, or CERTA, program.

In 2003, insurance industry representatives approached NRCA to address concerns about an increase of losses and incidents involving torching activities conducted by roofing workers. One prominent insurer experienced over $7 million in roofing torch-related claims in 2002 spread over more than 30 separate occurrences. The need for enhanced work practices and focused safety training to address torching activities became apparent, and NRCA arranged with MRCA to adopt and revise the nature of and deliverables offered by the CERTA program.

CERTA now offers a unique, comprehensive certification program in which authorized trainers deliver effective behavior-based training to roofing workers who install polymer modified bitumen roof systems. CERTA-authorized trainers undergo a rigorous full-day training session that includes classroom and hands-on instruction in propane safety, hazards related to torch use, proper techniques for safe installation of polymer modified bitumen, and development of training skills. Individuals who successfully complete all aspects of the program then are authorized to deliver training, under the CERTA protocol, to workers who qualify as certified roofing torch applicators.

MRCA continues to work with NRCA to make sure the program is up-to-date and uses the most effective procedures to develop authorized trainers and enhance the curriculum. Since its inception, roofing contractors who have trained their workers under CERTA generally have experienced fewer torch-related fires, injuries and property damage. Insurance industry claims also are a testament to the CERTA program success—the insurer that experienced over 30 torch-related claims in 2002 now can count such average yearly claims on one hand with a significantly reduced average yearly dollar loss.

Trainees in a CERTA class spend a great deal of time on some specific aspects of the use of roofing torches to install a polymer modified bitumen roof system. Those specifics have a direct correlation to keeping workers and others safe, and minimizing the likelihood of property damage. First, the CERTA curriculum focuses on the inherent danger of roofing torches and discusses assessing job hazards and establishing controls for torching operations. Details cover the proper personal protective equipment to minimize or eliminate exposure to burns and the critical need to handle propane properly and make sure equipment is in good condition.

Pre-job planning enforces the significance of determining the hazards unique to the particular worksite and developing the necessary controls to address those hazards. In addition to general working conditions and weather issues that may influence job site safety, specific hazards such as the presence of a combustible roof deck, roof penetrations, concealed attic areas and combustible flashing substrates are addressed and suitable controls are suggested and discussed. Also, attendees get comprehensive information on the types and ratings of fire extinguishers and how they are used most effectively along with the minimum CERTA requirements for appropriate fire extinguishers that must be on a roof. In fact, CERTA requires a fire extinguisher capacity far exceeding OSHA’s fire protection requirements during torch operations— two 4A60BC-rated fire extinguishers within 10 feet of torching activity.

Another important fire prevention protocol is the use of a fire watch system. The intent of the fire watch is that a dedicated individual is charged with inspecting the work area after the last torch, or other heat generating tool, is extinguished. Ordinarily, this is accomplished visually, but it can also be done more scientifically with the use of temperature sensing infrared thermometer. These are inexpensive tools that read the temperature of an area that the tool is pointed at and display the reading in degrees on the screen. The fire watch individual would shoot various specific locations where hot work was done—for example, at roof penetrations, flashings or field areas—noting the temperature for each spot. This procedure would be followed for the same spots a short time later, and if the temperature had increased, the possibility that a fire under the roof surface could be a source of the increased heat being generated would require further steps to determine the nature of the heat increase and the proper action to take.

Historically, many industries and building owners have required a 30-minute fire watch be maintained after the last torch or other tool has been extinguished. Under the CERTA protocol, a two-hour fire watch is demanded of a CERTA roofing torch applicator. The fire watch must be maintained not just at the end of the day but at other break times, such as lunch, so that fires do not start when workers may be away from the work area or inattentive during break times.

Another key element of training for the CERTA torch applicator involves installation techniques that are intended to reduce the likelihood of a fire being started. The techniques include specified thermal barriers to protect combustible roof decks and substrate protection for flashing installations, along with an alternative torching technique that minimizes the use of direct torching.

Installation of polymer-modified bitumen roof systems using propane roofing torches requires adherence to a number of safety procedures and an awareness of the hazards that workers may encounter. The CERTA program has a proven track record of enhancing the safe practices of roofing workers who install these systems and the roofing industry, building owners and the general public are all safer because of its development and use.

Harry Dietz is director of risk management for the National Roofing Contractors Association. At NRCA, his responsibilities include serving as staff liaison to the Health and Safety committee, updating and developing content for NRCA’s Safety Manual and other safety products.