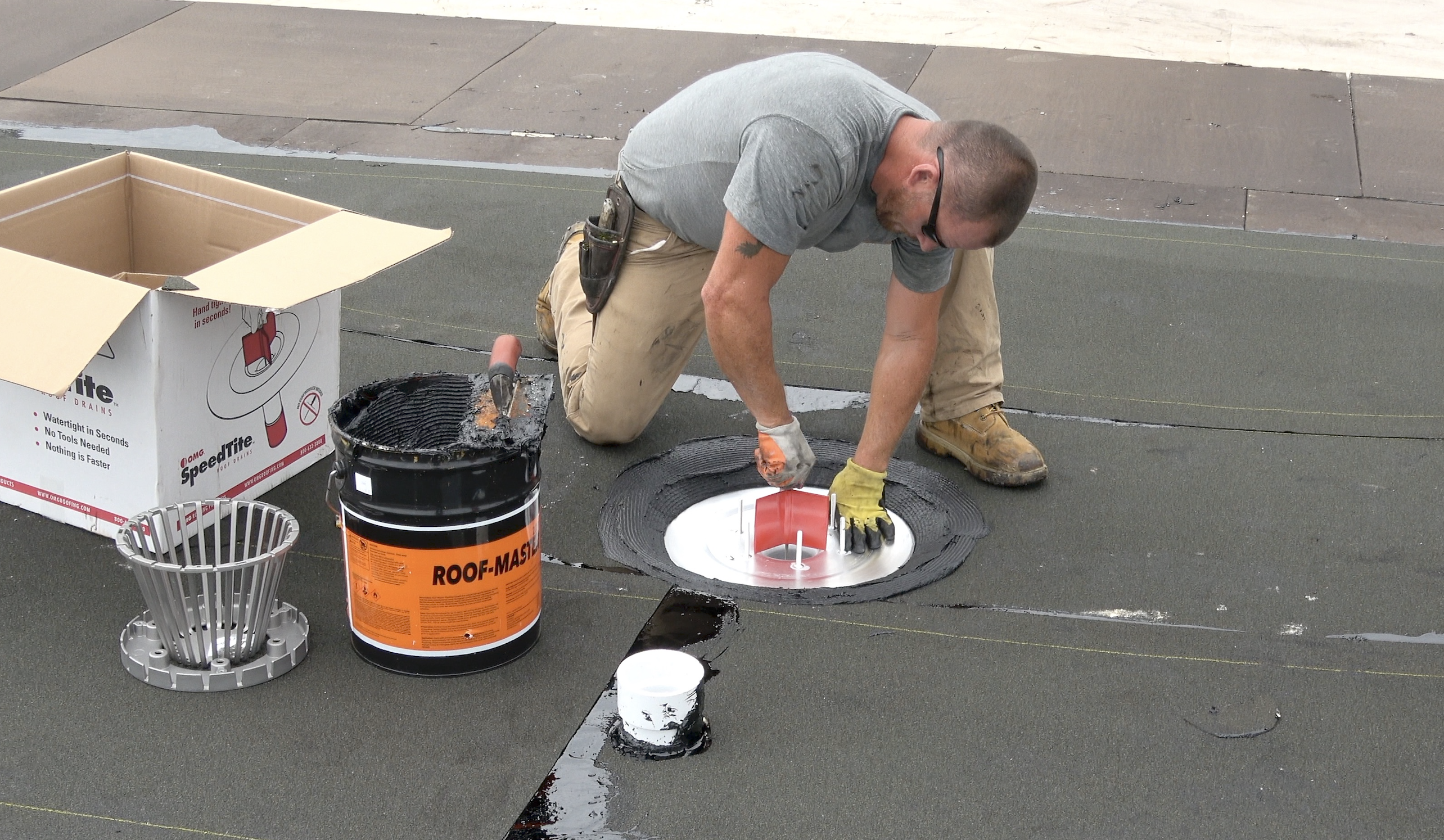 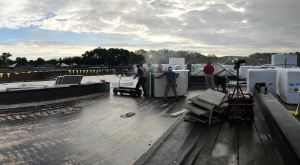 Strober-Wright Roofing executed a completed a tear-off and re-roof of the entire complex of Montgomery Lower Middle School. Approximately 130,000 square feet of roofing was removed and replaced with a two-ply modified bitumen system.

Summertime is the busy season for school construction projects, and as students prepare for vacation, restoration work heats up. At Strober-Wright Roofing Inc., a full-service roofing contractor headquartered in Lambertville, N.J., going to school in the summer is a big part of the company’s business plan.

The company is owned by Mike Strober, Mark Wright and John Foy, who share more than 100 years of experience in new construction, additions and re-roofing projects. “We specialize in schools,” says Robert Shoemaker, an estimator with Strober-Wright, who points to attention to detail as the key to succeeding in the competitive bidding market. “You have to sharpen your pencil. You have to understand what your crews can do and how fast they can do it. You have to know what their skills are.”

Mark Wright has been with the company 26 years, and he points to a recently completed project at Montgomery Lower Middle School in Skillman, N.J., as an example of just what Strober-Wright can do when faced with large-scale projects and tight deadlines. “We have the men and equipment to get these types of jobs done on time with high-quality workmanship,” he says. “That’s our strength.”

Wright and Shoemaker believe building relationships is essential in this segment of the market. “We’ve done a lot of schools,” Shoemaker says. “When our bid is successful, people breathe a sigh of relief and tell us they are happy to have us on their projects.”

The Montgomery Lower Middle School project was a complete tear-off and re-roof of a school complex encompassing several connected roof sections totaling approximately 130,000 square feet. There were two types of existing roof systems: a fully-adhered EPDM system and a ballasted EPDM system. These were torn off and replaced with a two-ply, hot-mopped modified bitumen system. 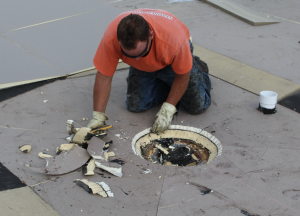 Tapered polyiso was installed to ensure proper slope to the drains, which were surrounded by an 8-foot tapered sump.

The Strober-Wright team looked for ways to make the installation as efficient as possible in order to meet the deadline. The original specification called for removing and replacing more than 100 existing roof drains, but the company suggested using SpeedTite drains from OMG Roofing Products instead.

“My partner, Mike Strober, came up with the idea to use the OMG drains, and we submitted it to the architect,” Wright notes. “The architect approved them. The key with these drains is you don’t need another trade to install them. They install quickly and minimize disturbance in the building because the drains drop into the pipe, bypassing the bowl. You don’t have to take the old bowl out and put a new bowl in. You don’t have to take ceiling tiles out and create a mess inside the building.”

On the ballasted roof sections, the stones were removed by Adler Vacuum. Then the existing EPDM roof was removed in sections. “We’d take a section out and replace it the same day so the building was watertight every night,” Wright explains.

At the end of each day, the old system was tied off to the new section. “With the existing rubber roof, we would leave a little extra material and flop it back,” Wright notes. “We’d adhere the flap using hot tar to the new system, and just peel it back the next day and go again.”

After the cover board was secured, the modified bitumen system was installed. The base ply and cap sheet were set in hot asphalt. Once the roof system had properly cured, it received two coats of an aluminum reflective coating.

Safety is always top of mind, but there were no unusual safety issues on the project, notes Wright. “We followed our standard safety protocols,” he says. “You have to make sure you’re wearing proper clothing and safety equipment with hot asphalt. We set up a safety perimeter warning with flags. If you were outside the perimeter, you had to wear a harness and be tied off at all times.”

Going With the Flow

More than 100 new drains were installed. The existing strainer domes, clamping rings and hardware were removed, but the drain bowls were left in place. The SpeedTite Drains were inserted, and the mechanical seal was tightened to provide a secure connection to the existing drain leader.

According to the manufacturer, the drains have a built-in vortex breaker to help improve water flow and a mechanical seal that meets the ANSI/SPRI/RD-1 standard (holding a 10-foot column of water for 24 hours without leaking). 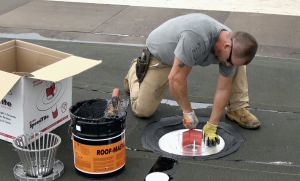 More than 100 drains had to be replaced on the school. Strober-Wright suggested using OMG SpeedTite drains, as they could be installed more efficiently than conventional drain replacement and caused less disruption in the building.

After the drains were flashed in, the clamping ring and strainer dome were installed. “The drains are flashed with the base ply and then a piece of the cap sheet over that, so it’s a two-ply flashing system,” notes Wright. “The architect here specified an 8-foot tapered sump, and that’s a nice thing because you have an 8-foot area around the drain that’s really going to flow. It works really well.”

Work on the project began in late June and was completed in late August, just in time for the school year to begin. Crews averaged 12 people and completed approximately 50 squares of roof per day.

According to Wright, the toughest part of the project was the tight schedule, which was made even more difficult due to inclement weather. “It was a wet summer,” he says. “It seemed like we were constantly battling rain, and we had to make sure we didn’t get behind the eight-ball on the schedule. You can’t work when it’s raining. You have to just batten down the hatches and prepare to get started the next day.” 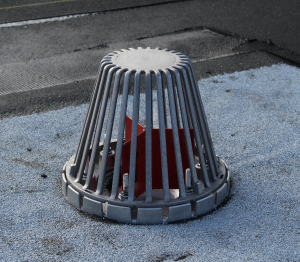 After the drains were flashed in, the clamping ring and strainer dome were installed. The drains feature an internal vortex breaker.

The company followed the weather report closely to plan each day’s production. “We have a weather company out of Hackettstown we use called Weatherworks,” Wright says. “When it comes to the weather—up to the minute, 24 hours a day—they are on top of it. They deal with nothing but New Jersey weather. We pay for the service, but it’s well worth it. Saving one day’s worth of work can pay for the whole year’s subscription.”

Despite the weather, work was completed on time and on budget. The project achieved the priorities the school system wanted: a durable, energy-efficient roof system with a 25-year warranty. “It’s a great system,” Wright states. “We make our bread and butter on these jobs. We hit our deadline, and now it’s on to the next one.”

OMG RhinoBond Projects Are Being Completed Across Europe