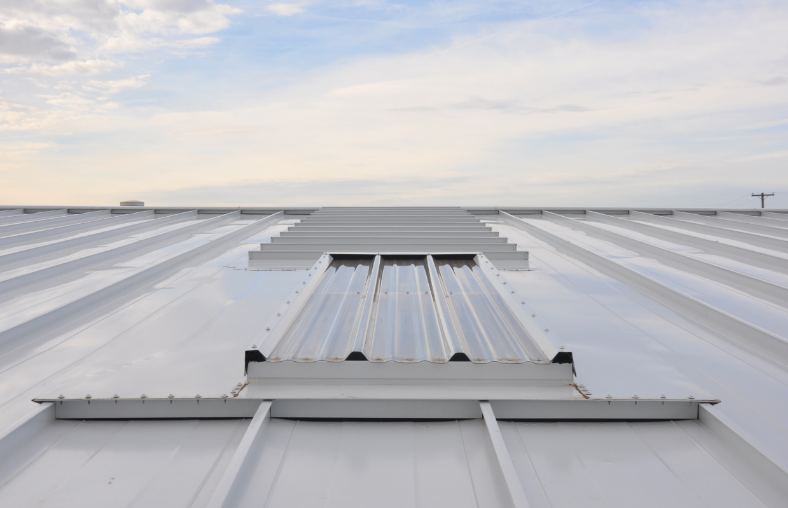 The versatility of a symmetrical standing seam metal roofing system has given birth to a new way of dealing with damaged metal roofing.

Northwest Distributors in Hays, Kansas, is a busy warehouse, dealing with auto parts and supplies. The R-panel roofing on the original building and an addition both sustained damage in several hailstorms over the years. After a 2017 hailstorm, the insurance company for Northwest Distributors agreed a new roof was needed and it would cover the damage.

The tried and true method of replacement involves complete roofing tear-off and replacement. Obviously, this would expose the valuable contents of the facility to the elements. Roofmasters Roofing & Sheet Metal of Hays proposed the patented 238T tall clip re-cover using the 238T symmetrical standing seam roofing system from McElroy Metal.

The roof re-cover would not require the removal of any existing roofing panels and therefore, would not interrupt any activity inside. It would be business-as-usual at Northwest Distributors during the install.

The owners at Northwest Distributors decided to go with the re-cover. Project manager Andrew Bizzell and project superintendent Andy Littrel headed up the assignment for Roofmasters.

“The tall clip re-cover cost is about the same as a removal, but the benefit comes from the contents of the building not being exposed to potential damage from rain or wind or hail,” says Bizzell. “Plus, they were able to keep working without interruption. That saved Northwest money as well.”

Panels for the 58,000-sqaure-foot re-cover were produced onsite and stacked on the roof. Roofmasters owns its own roll former that produces the 238T symmetrical standing seam panel. The 24-gauge panels are 24 inches wide with striations in PVDF Regal White. Panels were approximately 64 feet long.

“It really was a straightforward job,” Bizzell says. “We have installed several re-covers with the 238T. We like the ease of installation. It provides a great benefit to the building owner because if a panel is damaged, a single panel can be removed and replaced anywhere on the roof. If a panel is damaged with another type of standing seam system, you have to start on an end and remove all of the panels up to and including the damaged panel. Obviously, that is a much greater expense.”

Bizzell says not all insurance policies cover cosmetic damage sustained in weather events like hailstorms. The symmetrical standing seam system allows for the replacement of a single panel or only damaged panels the owner feels the need to replace, reducing his financial hit.

Roofmasters installed 3 1/2 inches of batt insulation between the original roof and the new panels to eliminate the possibility of condensation forming between the two metal systems. It also provided the owner with an added R-value of R-12, which will help reduce heating and cooling costs.

“We use transverse panels with skylights and other roof penetrations,” Bizzell says. “We also use the traditional curb. Installed correctly, they both do what they’re supposed to do.”