Located in the Sonoran Desert southeast of Phoenix, the Encanterra Country Club subdivision offers upscale living in houses built by Walnut, Calif.-based Shea Homes and surrounding an 18-hole golf course designed by Tom Lehman. The centerpiece of this vibrant community, however, is the 60,000-square-foot country club known as La Casa, The Club at Encanterra. 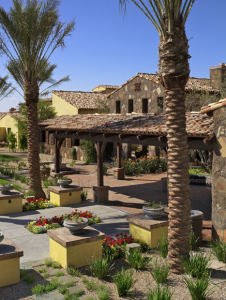 The centerpiece of the Encanterra subdivision in Phoenix is the 60,000-square-foot country club known as La Casa, The Club at Encanterra.

Designed to keep the community’s members active and entertained, La Casa, The Club at Encanterra contains four restaurants, a full-service spa, fitness center and three swimming pools. The club features Mediterranean-style architecture to essentially be an extension of the attractive homes in the subdivision.

To achieve a rustic, Old World appearance, Shea Homes specified a two-piece clay tile roof installed in mud set, accented with copper flashings; custom-fabricated ornamental details; and a spray-foam system on the low-slope roof areas. Only a roofing contractor with the experience and capabilities to do all facets would suffice.

Phoenix-based Century Roofing Inc., which has been in business since 1991, has a long history of commercial and custom residential projects. With crews experienced in installing all types of tile, as well as its own metal fabrication shop, the contracting company was chosen to roof the club as it was being built.

Hustling for the Job

Steve Schwoerer, president of Century Roofing, knows what it takes to hustle and land large jobs, like La Casa, the Club at Encanterra. Knowing the project was going to be a landmark building in the valley attracted him to it. “We got it off the permit list, pursued it, bid on it and landed it, although not quite so cut and dry,” he says. “We have a lot of custom-home
experience and in Phoenix that means clay tile roof experience, so it fit in perfectly with our abilities.”

Originally, the club’s designer specified a different type of clay tile than what was actually installed on the roof. However, Schwoerer invited Irvine, Calif.-based Boral Roofing to come up with a color match and submit a quote for its tile to be installed on the project. “Boral had their plant manager fly into Phoenix to look at the roofing on the existing guard house that Shea Homes was trying to match,” Schwoerer recalls. “Boral then formulated a custom-blended tile and shipped the tile to Phoenix so a mock-up could be done for the architect’s approval, which they received.”

In addition to its curb appeal, the tile offered other benefits. Manufactured from naturally occurring geologic material (59 percent of which is recycled content), Boral clay tiles have received Cradle to Cradle Gold certification from the Cradle to Cradle Products Innovation Institute, San Francisco. The certification program assesses products in five categories: material health, material reutilization, renewable energy and carbon management, water stewardship and social fairness. The tile product is wind, hail and fire resistant, as well as considered a cool roof, meaning it reflects heat from the sun, which reduces the need for air conditioning and provides savings on energy bills. 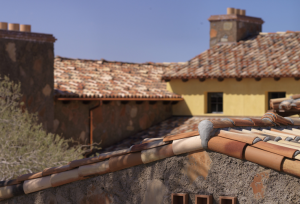 The roofing work was completed in phases as La Casa, The Club at Encanterra was being built. “Anytime you do a project of this size, the general contractor has scheduling demands that add to the difficulty, especially when you’re working in stages and
they want you out there as it’s being built rather than all at once,” Schwoerer states. “Their version of what’s roof-ready versus what’s actually roof-ready is one of many things that causes a roofing contractor stress!”

Century Roofing’s five-man crew began by installing the spray-foam roof on the low-slope portions of the building, which compose 130 squares of the total roof area. Although spray-foam roofs in Arizona typically are 1-inch thick, the club’s roof is 2-inches thick to achieve additional R-value. The foam was sprayed directly onto the wood deck and two base coats were applied before the final topcoat, which features a #9 crushed marble cast into the wet topcoat by hand.

PHOTOS: US TILE BY BORAL