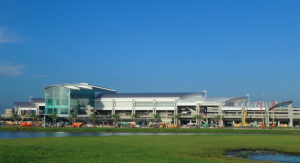 Architectural Sheet Metal Inc. has been in servicing the Orlando area for more than 23 years, specializing in commercial metal roofs and wall systems, primarily new construction. When Matthew Leonard, the company’s vice president, found out that the Orlando International Airport was proposing a new terminal project with a metal roof, he jumped at the chance to submit a bid.

He wanted to land the job because it would be the largest project the company has ever tackled, and one of its most prominent. He also wanted it for another reason—he knew he’d see it every time he drove to the airport. “For many years now, we’ve specialized in standing seam metal roofs. It’s our bread and butter,” he says. “We’ve done lots of schools, government building, military bases. It’s just something we enjoy doing. When this project came around, right here in our backyard, we knew we wanted to take it on. It’s larger than anything we’ve ever done, but it’s our specialty.”

The South Airport Intermodal Terminal Facility and APM Complex is a new construction project that coordinates mass transit for the airport, including regional rail systems and the Automated People Mover (APM). It’s part of the first phase of an ambitious $2 billion plan to almost double the size of the airport. 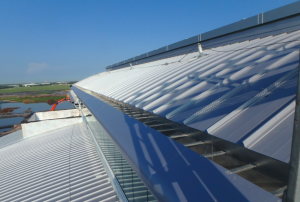 Architectural Sheet Metal installed the Berridge standing seam metal roof system, as well as internal aluminum gutters and a custom-fabricated aluminum bullnose that runs along the perimeter of the roof

The building encompasses approximately 200,000 square feet, and the structure is primarily covered with a standing seam metal roof. The scope of work for Architectural Sheet Metal included installing the metal roof system and internal aluminum gutters. It also included custom fabrication and installation of an aluminum bullnose that runs along the perimeter of the roof. “Every roof is radiused, and some sections have compound double raiduses,” Leonard notes. “The trickiest part of the project is probably the bullnose because all of the gable ends of the roof are radiused, and the large bullnose has to be welded on in 30-foot sections.”

Another tricky thing about the project is that the work was divided into two different contracts with two different construction managers. On one side of the building, which houses the monorail and parking garage, the project is overseen by Hensel Phelps, and on the other side, which handles the train lines, the construction is overseen by a Turner-Kiewit joint venture. The dividing point is a building expansion joint that runs across the middle of the roof. “We’re one of very few subcontractors out here that has a contract with both of the construction managers,” Leonard says. “They both have their own agendas, their own timelines, and their own completion dates, and it was a delicate balancing act working with the two of them.”

The roof system was designed to unify the elements of the structure and tie the building together. Some sections of the roof cover the building, while others serve as canopies, so there are two types of metal deck on the building. “The area we call the spine has a 3-inch-thick acoustical deck,” Leonard explains. “That was interesting because before we could put our 6 inches of polyiso on, we had to install batten insulation in the flutes. The acoustical decking is perforated, so you can see through it. That’s a little different, when you’re so high up. It spooked the guys at first to be able to see right through it.” 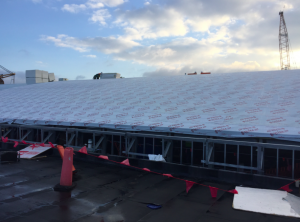 Crews dried in the entire roof with a waterproofing underlayment from MFM Building Products specifically designed for high-temperature applications.

The other sections were comprised of standard type B metal deck. Sections covering the interior were insulated, while canopy sections were covered with 5/8-inch DensDeck from Georgia-Pacific.

After the underlayment was applied, the welded aluminum gutters were installed. “The longest piece was 78 feet,” says Leonard. “We fabricated the sections, water-tested them and shipped them out. We used a crane to lift them to the roof.”

The roof system was supplied by Berridge Manufacturing, and the 24-gauge galvalume metal panels were roll formed at the site. “Berridge has a ZEE-Lock double-lock standing seam panel,” Leonard says. “We own one of their portable roll formers, and we have it on site here. We pick it up with a crane, and lift it up to the edge of the roof, and we actually roll form our largest panels straight out to the roof. The guys just catch the panels as they come out of the roll former.” 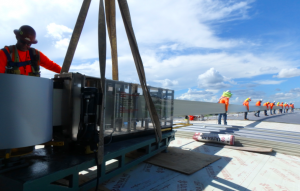 Metal roof panels were roll formed at the site. For most roof sections, the roll former was hoisted by a crane, to the edge of the roof, and crew members stacked the panels as they come out of the roll former.

Panels were stacked in piles of 10 for installation. There were 12 different roof surfaces, so as the roll forming crew moved along, other crews would start installing the panels. “Every stack was tied down with strapping to ensure that it wasn’t susceptible to wind,” Leonard points out. “With a hurricane in the forecast, we were very careful about that.”

The panels in the spine area had a tighter radius, so those panels were formed on the ground using separate curving machine. Lining up the panels perfectly was critical. “With a radiused roof, it’s sometimes harder to find things to measure off to ensure your panels are straight. This panel is a left-to-right system. It’s a male-female overlay with a continuous clip that Berridge manufactures. The panels are hand-crimped together, and then you do the first and second stage of the double-lock panels with an electric seamer. You just turn it on and it goes up and over.”

Fall protection posts were installed during the framing process, which helped with safety planning but posed problems when it came to detailing. “It’s nice to have permanent fall protection points to tie into, as everyone had to be 100 percent tied off, but there are close to 200 fall protection posts on the project that we had to cut around and flash,” Leonard says. “I’ve never seen so many posts on a roof like that.” 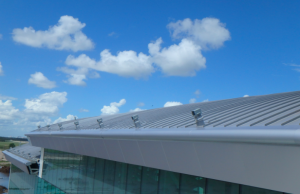 The aluminum bullnose was constructed after precise measurements were taken at the site. After they were custom painted to match the roof, the 30-foot sections were lifted into place and installed.

Because the posts were tied into the structural steel and couldn’t be moved, the company designed and manufactured a welded aluminum flashing detail to ensure they all looked the same no matter where they landed in the panel profile. “We set up a welded aluminum flashing that should last forever, and it’s welded, so it shouldn’t leak. We try to go above and beyond in our flashing details.”

Leonard points to his company’s fabrication experience as a key to its strength. “We try to be more than just a roofing company,” he says. “We try to be a custom metal fabrication company that fabricates the panels to precise specifications determined by the site. We custom fabricate metal and then, as roofers, we install it. We like to have that double whammy. Not many people have that ability to do both.”

The company’s expertise came in handy on the bullnose. “The bullnose was originally bid as 22-gauge metal,” he says. “We looked at it and we didn’t like it. It’s a large, 9-inch radius, and we felt the thin, light-gauge metal would shake in the wind. Every 10 feet would be a lap joint with caulk, which would be susceptible to wind damage. We came up with the idea of using a welded piece of .080 aluminum. Once it was approved, we purchased a 100-ton press brake with a custom die to fabricate this bullnose.”

The bullnose was constructed from precise measurements taken at the site. “We took the radius off of the building and created jigs in our warehouse,” Leonard explains. “We welded pieces together in 30-foot sections, and we shipped them to a local painter who coated them with baked-on Kynar to match the roof.”

The bullnose was designed to hook into the gutter strap and wrap around onto the fascia, where it is screwed into the framing. In areas where there is no gutter, sections of the bullnose are equipped with a larger flange with an S-hook built into it to attach it to the roof. Corner pieces tie it all together.

Watching Out for Irma

Dealing with two different GCs was challenging, in part due to changes in the schedule. “Originally, we were supposed to finish one side first and then start the other side, but both phases of the project ended up starting around the same time,” says Leonard. “This doubled the manpower we needed on the job.” 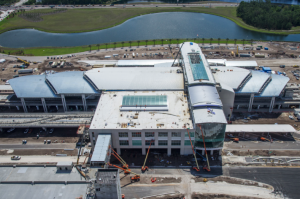 For changes like the bullnose, Architectural Sheet Metal had to make sure RFIs were submitted and approved by both sides. “Sometimes it was hard to keep track of who we submitted it to, but it worked to our benefit at times. Once it was approved by one side, it was easily approved by the other.”

The schedule had the crews working in hurricane season, and precautions were taken to make sure the job site was prepared for high winds. “When Hurricane Irma was approaching, I checked every single weather update every day until it made landfall,” Leonard recalls. “It hit on a Monday, and a full week ahead of that we were cleaning the roofs and preparing the gutters. We removed all debris on the jobsite because any trash on the roof could clog the downspouts. We added more and more men to the process throughout the week, and we shut the jobsite down on Wednesday. We took all of the material we had, stacked it, bundled it together, and we were able to move it all inside the building. We were pretty well complete on the Hensel-Phelps side, and Turner Kiewit brought in 40-foot Conex boxes for us to put our material in and secure it. They tried really hard to make sure the jobsite was secure.”

As the storm progressed, it deviated from the projected path, and no one could be certain which direction the winds might be coming from. “We just had to start battening everything down,” Leonard recalls. 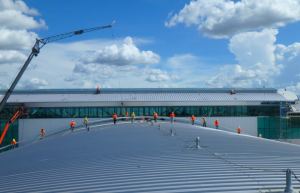 Stacks of panels on the roof that were not yet installed were strapped every 2 feet on center. The entire state was in emergency mode, making things difficult. “For four or five days before the storm even hit, we couldn’t find water, rope and extension cords. Grocery stores were running out of supplies. Gas stations were running out of gas.”

After the storm passed, Leonard breathed a sigh of relief. The roof wasn’t damaged. The panels that had already been installed were in great shape, and the uninstalled panels weren’t harmed.

Elements like the weather are beyond anyone’s control, and Leonard notes his company tries to control as many variables as it can. “We have full control over the actual fabrication of the material and the quality of it,” he says. “When I call something in, I talk to our guy who works with me. Our company oversees it. Every morning I stop by the shop and follow up on the process on the way to the job site. We install it. I can make sure everything is OK.”

The project is nearing completion, and Leonard can’t wait to finish a landmark project he’ll see every time he makes a trip to the airport. “You can’t miss it,” he says. “It’s huge.”