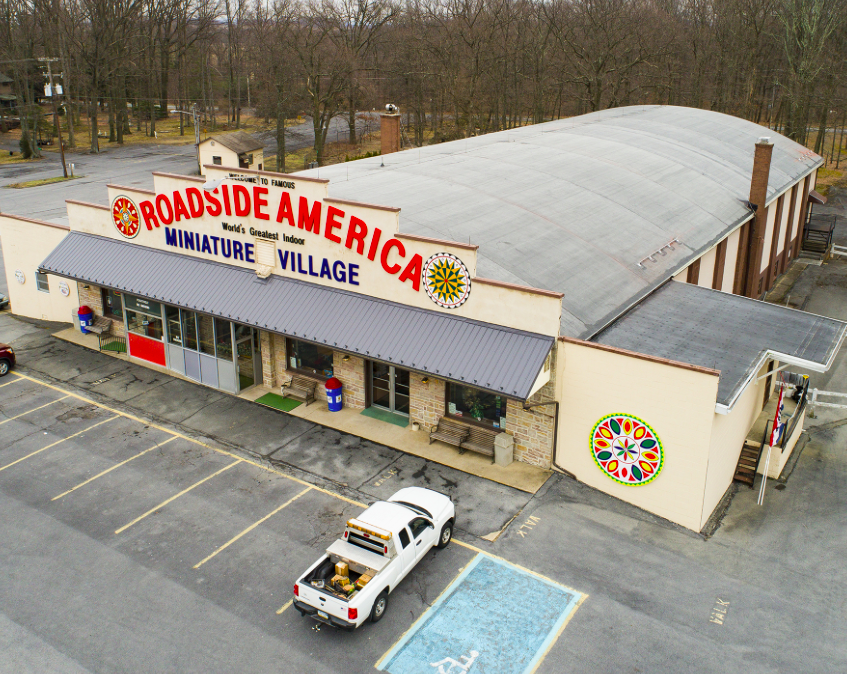 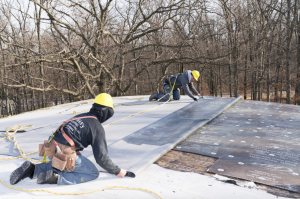 Lovingly and meticulously crafted over a period of more than 60 years, the 6,000-square-foot display of miniature villages at Roadside America in Shartlesville, Pennsylvania, has been featured on the HISTORY channel and in such books as “1,000 Places to See in the USA & Canada Before You Die” by Patricia Schultz and “Weird Pennsylvania” by Matt Lake. To area families, however, the museum is more than just a funky tourist attraction. It is a treasure that has been shared by four generations—one that must be passed on to future generations.

So, when the building’s nearly 65-year-old barrel roof began to fail, threatening to shutter the museum and put its gems in storage for good, the community and fans far and wide rallied. Nearly $80,000 was raised, roofing crews worked in between winter storms, and a new EPDM roofing system was installed to protect the masterpiece below.

Dubbed “The World’s Greatest Indoor Miniature Village,” the display at Roadside America is the life’s work of its sole creator, Laurence Gieringer. Fascinated by miniatures from an early age, he made the first piece in 1902 and continued expanding the collection until his death in 1963. The result is a breathtaking snapshot of American rural life spanning more than 200 years, from a frontier town with saloons and horse-drawn wagons and carriages to a 1950s Main Street with a movie theater and tail-finned Chevys. The collection includes 300 hand-built structures, 600 miniature light bulbs, 4,000 tiny figurines, 10,000 hand-made trees, working model railroads and trolleys, moving waterways, wall paintings, and replicas of such landmarks as Mount Rushmore, the San Francisco-Oakland Bay Bridge, and Henry Ford’s original shop in Dearborn, Mich. The twice-hourly patriotic “Night Pageant” features an illuminated Statue of Liberty and the playing of America’s national anthem and Kate Smith’s rendition of “God Bless America.”

Originally housed in the basement of Gieringer’s childhood home and later in the carousel building of an abandoned amusement park, Roadside America moved to its current home in 1953. Still a family business, it is now owned by Gieringer’s granddaughter Dolores Heinsohn, and operated by his great-granddaughter Bettina Heinsohn and her husband Brian Hilbert.

A carpenter by trade, Gieringer fabricated the rafters for the museum’s 80-square-foot-by-123-square-foot barrel roof 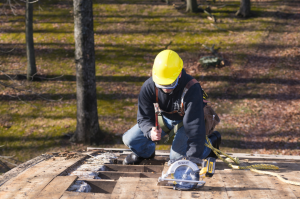 Years of water penetration had damaged the existing roof, and a complete tear-off and replacement was in order. The original rafters and roof deck were sound. Photos: Mule-Hide Products Co. Inc.

himself. In 2016—63 years later—they and the original wood plank deck were still in place. According to Carl Rost, general manager of contractor Bachman’s Roofing, Building & Remodeling Inc. of Wernersville, Pennsylvania, the hot-mop-down tar roof had been coated “20 times more than it should have been.” Time and weather had taken their toll. A severe snowstorm in January 2016 brought wind and tree damage. Consistent rain would cause leaks into the attic, with water sometimes dripping to the show floor below.

An elaborate water collection and removal system was created to protect the priceless miniatures. Buckets were placed in the exhibit and items moved whenever water started dripping to the show floor. Tarps—22-feet-by-22-feet—were hung in the attic, zig-zagging through the space to catch water and funnel it into 55-gallon barrels, which were then emptied by pumps.

While the patches and stopgap measures had done their job, they clearly were not a permanent solution. A new roof—and a major fundraising effort to pay for it—were needed.

For many supporters, including Bachman’s Roofing Owner and President Eric Bachman and ABC Supply Branch Manager Jeff Smith, helping Roadside America was a matter of ensuring that a family tradition spanning four generations lives on. Their parents had brought them to the museum as children. They, in turn, took their kids, who are now sharing it with their families.

There was no question about helping Roadside America, Rost says. “Eric met with Brian and, within minutes, told him ‘We have to make this work.’”

A 60-mil EPDM roofing system was chosen for its ease of installation on a barrel roof, its durability and its cost-effectiveness. 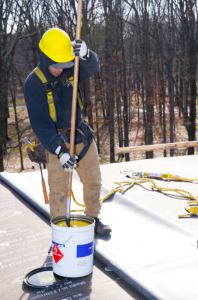 The original plan was to recover the existing roof, reducing costs and, with winter weather at hand, allowing the crew to get the job done as quickly as possible. Once work began, however, the damage caused by years of water penetration was evident and the job switched to a complete tear-off and replacement.

EPDM roofing systems are common in Berks County, where Shartlesville is located. The membrane’s ease of installation on a barrel roof reinforced the choice to use it on Roadside America’s building.

“We’ve done quite a few barrel roofs and have found that EPDM works best,” Rost says.

Roofing membranes have “memories,” he explains. Rolled tightly for shipping, they want to snap back to that state when laid out on the jobsite. They must be given sufficient time to flatten out prior to installation, or wrinkling can occur. EPDM membranes “relax” much more quickly than other membranes do, particularly in the cold temperatures that the Bachman’s Roofing crew would be working in. The membrane also remains flexible in hot and cold temperatures, enabling it to be easily curved over the barrel roof’s rafters.

“We knew that EPDM would give us a fast, wrinkle-free installation,” Rost says.

EPDM also is less slippery than other membranes, points out Rob Keating, territory manager with Mule-Hide Products, helping ensure that snow will not slide off the curved roof, potentially injuring a museum guest or employee walking below. A snow rail manufactured by Alpine Snow Guards was specified and installed to alleviate previous issues with snow and ice sliding down the roof and damaging an air conditioning compressor.

A black membrane was chosen for its lower cost and because, with eastern Pennsylvania having more heating days than cooling days, it could help the museum manage its heating costs, Rost says. A 60-mil membrane was selected for its durability and long expected lifecycle, he adds, helping the museum reduce its ongoing maintenance costs and prolong the day when re-roofing would again be required.

Fiberboard insulation boards were fastened to the existing deck boards with screws and plates. To accommodate the roof’s irregular shape and the cold temperatures, the EPDM membrane was fully adhered using a fast-drying, freeze-resistant, low-VOC bonding adhesive.

In addition to the barrel roof, the crew replaced an existing 625-square-foot low-slope section of EPDM roofing on one side of the building’s front.

January and February bring snow, sleet, ice and wind to Shartlesville—certainly not ideal conditions in which to undertake a re-roofing project. Despite unfavorable weather forecasts, the Bachman’s Roofing crew began work as soon as the necessary funds had been raised and Roadside America gave the green light. 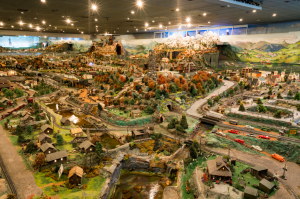 “The displays inside are priceless, and if they were damaged by water they couldn’t be replaced,” Rost says. “So, we said we’d work through the bad weather, taking time off as necessary.”

Work began on January 9, 2017. Thanks to some interference by Mother Nature, what normally would have been a one- or two-week job took six weeks. A crew of 10 completed the tear-off and eight professionals installed the new roofing system.

“Our crew endured,” Rost says. “One morning they called to tell me that they wouldn’t be able to work that day. I said ‘The storm went through last night. What’s the deal?’ They said that the parking lot was a sheet of ice. I had to see for myself, so I drove out there. The moment I got out of the car, I fell onto the completely iced-over parking lot.”

Given the roof’s slope, extra attention was paid to safety. Crew members worked carefully, without rushing—particularly when working along the roof’s steep edges. Everyone was harnessed while on the roof and followed all other relevant safety regulations. Rost and the firm’s safety inspector spent extra time monitoring the jobsite.

With the re-roofing project complete, the buckets, tarps, barrels and pumps that once kept Roadside America’s miniature villages dry have been put away. A spring, a summer and an early fall have come and gone, with no leaks. The museum has been saved.

Hilbert extended thanks to those who made it possible. “Without the generous support of so many donors, this project wouldn’t have happened,” he says. “Where do you find that these days?”

Rost adds, “Now future generations can come and enjoy what four generations of our families have already enjoyed.”

Ballasted EPDM Roof Has Been in Service Since 1979