Elementary school students sometimes find themselves staring out the window, but few have a view to rival that of the students at Sullivan’s Island Elementary School in Sullivan’s Island, S.C. The school is located on oceanfront property, and when it was time for the original building to be rebuilt, the site posed numerous challenges. 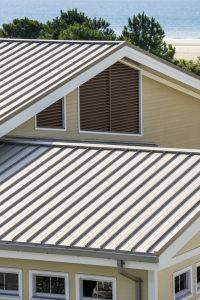 The standing-seam roof is made up of 0.040-inch coated aluminum panels that are 18-inches wide.

The original school had been built in the 1950s. It had been designed for 350 students and built on grade. The new school would have to be elevated to conform to modern building codes and service 500 students. The structure would not only have to withstand high winds, severe weather and a salt-air environment, but it also would have to fit into its surroundings. Many residents feared the larger building would look out of place in the cozy beach community. It was architect Jerry English’s job to figure out a way to make it work.

English is a principal at Cummings & McCrady Architects, Charleston, S.C., the architect of record on the project. He worked with a talented team of construction professionals, including Ricky Simmons, general manager of Keating Roofing & Sheet Metal Co. Inc. in Charleston, to refine his vision and bring it to life. English and Simmons shared their insight on the project, and they both point to the building’s metal roof as a key element in the project’s success.

Cummings & McCrady Architects handles a broad range of commercial, institutional, religious and historic work—new construction and renovation. The firm had done a lot of work with the Charleston County School District over the years, including a small library addition for the original Sullivan’s Island Elementary School after Hurricane Hugo passed through in 1989, and it was awarded the new construction project.

The building’s foundation system had to meet strict regulations regarding resistance to storm surge. The building is elevated on concrete piers, which were topped with a 6-inch reinforced concrete slab. Metal framing was constructed above the slab. “With our building, we had to raise the underside of the structure almost 7 feet above the grade,” English recalls. “What we did is we built it a little bit higher than that so the underside could be left open and used for playground.”

For English, coming up with a design that would reflect the character of the local community was the biggest challenge. To achieve that goal, he broke up the building into four sections and spread them across the site with the tallest sections in the center. “We have four linked segments that transition down on each end to the height of the adjacent residences,” he says.

The roof was also designed to blend in with the neighboring homes, many of which feature metal roofs. “The idea of pitched roofs with overhangs became a strong unifying element,” English explains.

English checked with several major metal roofing manufacturers to determine which products could withstand the harsh oceanfront environment and wind-uplift requirements. “Virtually every one of them would only warranty aluminum roofing,” he says. “The wind requirement and the resistance to the salt air were what drove us to a coated aluminum roof.” 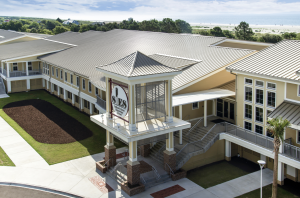 The majority of the panels were factory-made, but Petersen Aluminum supplied the rollforming machine and the operator to handle the onsite rollforming of the largest panels.

The standing-seam roof is made up of 0.040-inch coated aluminum panels that are 18-inches wide. Metal trusses give the roof system its shape. English tapped the resources of roof consultant ADC in Charleston and the metal roofing manufacturer to iron out all the details. English wanted to avoid any cross seams in the metal roofing, so he worked with Dave Landis, the manufacturer’s architectural/technical sales manager, to arrange for the longest panels to be formed onsite.

The roof also includes two decks that serve as outdoor teaching areas. These sections were covered with a two-ply modified bitumen roof system and protected with a multi-colored elevated concrete paver system.

Another standout feature is the school’s entry tower, which is topped by a freestanding hip roof featuring curved panels. This roof was constructed with panels that were 12-inches wide. “We found other examples on the island where the base of the roof flares a little bit as a traditional element, and with the closer seamed panels they were able to get those curves,” English says. “It’s a refinement that’s a little different than the rest of the roof, but it’s the proper scale and the fine detailing pulls it together and sets if off from the main roof forms that are behind it.”

Christopher K. King is an editor and writer who has covered the construction industry for more than 15 years.

Vapor Permeable Underlayment Designed for Use on Steep-Slope Roofs

Be the first to comment on "An Oceanfront Elementary School Poses Tough Problems, but a Coated Aluminum Standing-seam Roof Passes the Test"