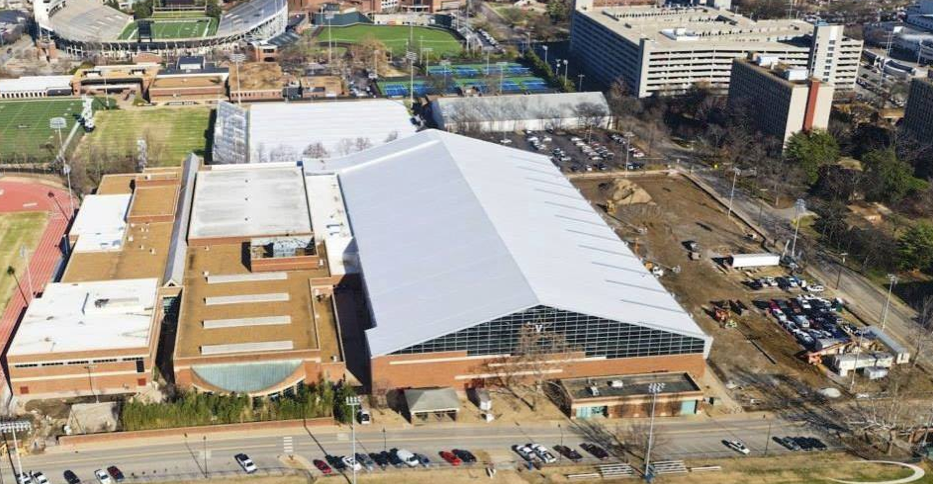 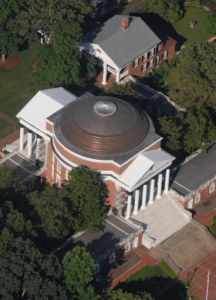 The University of Virginia was founded by Thomas Jefferson in 1819.

The domed roof required about 6 tons of 20-ounce Flat-Lock copper. W.A. Lynch Roofing sheared 4,000 individual tiles to approximate dimensions in its sheet-metal shop, and a makeshift sheet-metal shop was set up on top of the scaffolding to complete the final measurements and exact cuts.

The University of Virginia was founded by Thomas Jefferson in 1819. Jefferson modeled his design—presented to the university board in 1821—after the Pantheon in Rome. Although he died in 1826 while the Rotunda was still under construction, the stunning building housed the university’s library as Jefferson envisioned.

The rotunda renovation is a two-phase project, and roofing work was part of Phase 1. The roofing team believed seven months was adequate to complete the job; the university, however, requested it be complete by April 2013 so scaffolding would be removed in time for the commencement ceremony. That gave the team a four-month timeline. 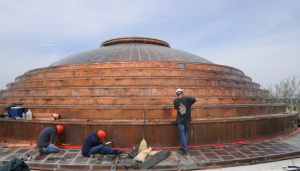 The domed roof required about 6 tons of 20-ounce Flat-Lock copper.

Tom McGraw, executive vice president of W.A. Lynch Roofing, explains: “This was just short of impossible even if it wasn’t winter. But as a graduate of UVA, I recognized the basis of the request and agreed to it. So we doubled the manpower and went to a 10-hour day, seven-day a week schedule. We divided the roof into four equal quadrants, each separated by an expansion joint and put a crew in each area working simultaneously with the other three. We also added support personnel in our sheet-metal shop, as well as runners to keep the flow of material to the job site on schedule for the sheet-metal mechanics. In the final analysis, we made the schedule and completed our work within the owner’s request.”

The roofing project was essential because of rust on the previous terne-coated metal roof. It was determined the rust was caused by inadequate roof ventilation that created condensation on the underside of the metal roofing. Ventilation was lacking because of a Guastavino tile dome that was installed in 1895. The condensation was addressed by installing a concealed venting system at the intersections of the treads and risers at the seven steps in the roof, as well as at the top of the dome below the oculus. “Heated air has low density so it will logically rise creating natural convection,” McGraw notes. “This convection creates air movement below the roof and minimizes dead air spaces and the potential for condensation. The key to this is ensuring that you size the ‘intake’ venting similar to the ‘exhaust’ venting so that air will flow in an unrestricted fashion.”

Reroofing a dome can be a challenge, and determining how to keep the interior and its priceless valuables dry required some ingenuity. McGraw invented a tarp that he compares to a hooped skirt to keep the space watertight. The roofing crew cut trapezoidal sections of EPDM membrane and installed them from the bottom to the top of the dome. This skirt-like tarp was configured out of eight pieces at the bottom, six at the midpoint and four at the top. The maximum cut sizes for each level were determined using a computer drawing. Creating the EPDM covering in sections made the tarp easy to handle and remove. “If we seamed it all together or made it in less pieces, the guys wouldn’t have been able to lift it,” McGraw adds.

The tear-off process involved removing the painted metal panels according to lead-abatement standards; the panels were cleaned offsite to maintain the integrity and safety of the job site. A new wood deck was installed on furring over the tiles. This was covered with 30-pound roofing felt and red rosin building paper followed by the new copper roof.

Each piece of copper was tinned and folded before being installed. This process was necessary because of the lack of symmetry on the building. McGraw recalls: “Because this building is almost 200-years old, you have to recognize that not everything is as true and square as one might hope. There are seven steps that circle the base of the dome, and each tread and riser changed in height and width all the way around the building.”

This is the fourth roof for the Rotunda. The first was a tin-plate roof designed by Thomas Jefferson; the second was copper that was a replacement roof after a fire in 1895; the third roof was painted terne-coated steel from 1976; and the current roof is 20-ounce Flat-Lock copper that will be painted white. The decision to select copper was based on cost, durability and historic appearance.

Phase 2 of the project began in May, and the Rotunda will be closed for repairs until 2016. At a price of $42.5 million, utility, fire protection and mechanical upgrades will be made, as well as a Dome Room ceiling replacement and construction of a new underground service vault. The roof also will be painted white, and leaking gutters will be repaired during this phase.

PVC System Is the Answer for U.S. Bank Stadium Roof