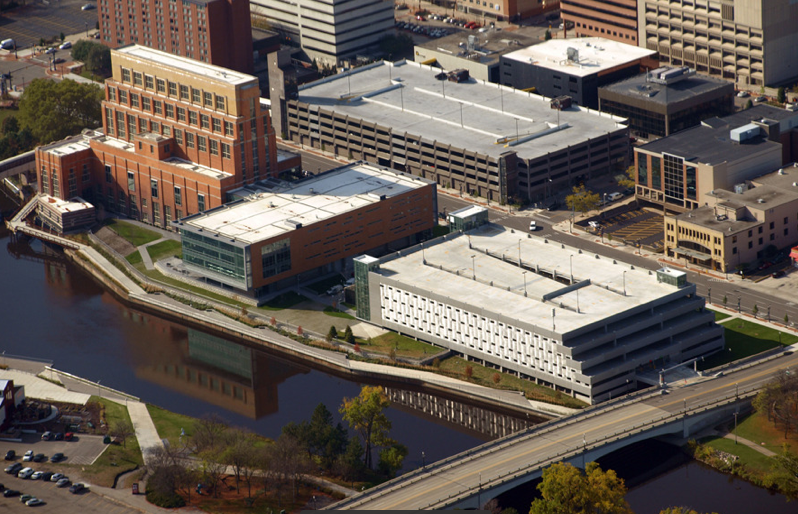 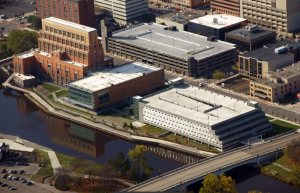 Accident Fund Holdings, the nation’s 13th largest workers’ compensation insurer and a subsidiary of Blue Cross Blue Shield of Michigan, has been headquartered in Lansing, Mich., for more than 100 years. When it outgrew its office, the firm’s leaders were determined to stay in Lansing.

By revitalizing the iconic Ottawa Street Power Station, which was built along the Grand River in 1939 but had been mostly abandoned since 1992, the company would have 9 stories and 122,000 square feet to grow into. To support Michigan’s economy, 106 of the 118 contracts and suppliers that participated in the project were Michigan-based firms and 54 of those were Lansing-based.

To remove existing building elements, including catwalks, elevator/ stair shafts, framing and platforms, the team cut two 40-foot-long by 20-foot-wide roof hatches so a crane operator could move about 8,900 pieces of steel in and out of the building while the floors were built from the bottom up.

Since Accident Fund moved into its new headquarters, the building has won numerous awards, including the Governor’s Award for Historic Preservation from the state of Michigan and an Excellence in Economic Development Award from the Washington, D.C.-based International Economic Development Council.