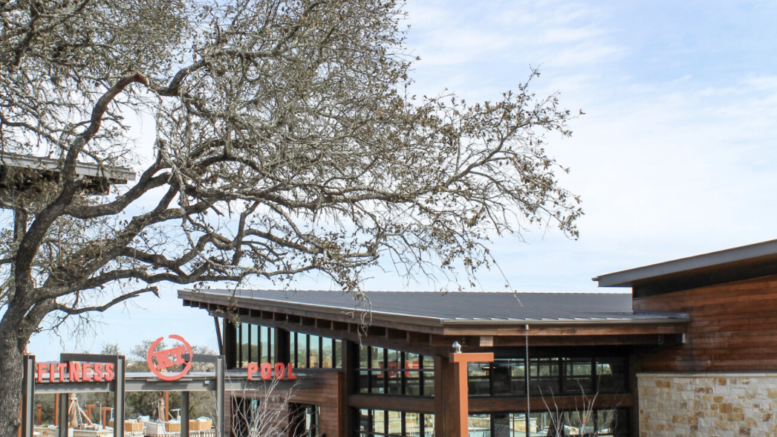 Kissing Tree is a 1,300-acre gated community for residents 55 and older in San Marcos, Texas. Its centerpiece is The Mix — a 20-acre activity campus with amenities for residents including indoor and outdoor swimming pools, a fitness center, pickleball courts, a golf course, bocce ball courts, horseshoe pits, and a beer garden.

Texas Traditions Roofing tackled a variety of work on the project, including metal roofing, single-ply roofing, and wall panels for the Fitness Center and Swim Center. They also provided roofing for the Comfort Center, pool cabanas, and a covered walkway. Challenges on the project included the multiple scopes of work, as well adapting to an ever-changing schedule and working around multiple trades on a busy jobsite.

As work progressed under the general contractor, BEC Austin, crews from Texas Traditions were ready to jump in as needed. “The project consisted of multiple buildings, so we just rolled as they were ready,” recalls Michael Pickel, vice president of Texas Traditions Roofing. “When they were ready for us to do the TPO at the Fitness Center, we got started right away. A few weeks later, they were ready for metal, and we ran our metal guys out there. Then we went over to the next building, whether it was the indoor pool or the Comfort Center, as they were ready. There were multiple trades working with the general contractor, so we made sure that we were meeting their expectations and being out there when we needed to be out there so they could open on time.”

Work on the Fitness Center began with the section of TPO roof in the area that supported the HVAC units. Crews mechanically attached the two layers of 2.2 inch polyiso insulation, along with tapered insulation to provide proper drainage. “We gang fastened all of that together with half-inch DensDeck and then adhered the 60-mil GAF EverGuard TPO over that,” notes Pickel. “We installed walkway pads for the HVAC units and terminated everything.”

The design featured screens designed to shield the HVAC units from view. When the roofing work began, the base of the framing had already been installed through the deck, and crews for Texas Traditions set up pourable pitch pockets and boots. The screens were installed after the roofing work was completed.

The roof was bordered by a very low parapet, so the safety plan included flags at the perimeter as well as personal fall arrest equipment. “It’s not a huge, wide-open building, so it was not ideal from a safety perspective,” Pickel recalls. “You’re going to have times where it’s crowded up there. Crew members had to be tied off at the perimeter and while installing the coping cap.”

The low-slope area is intersected by a large plane of sloped metal roofing. The metal roof was comprised of Sheffield Metals 1-1/2-inch mechanical lock panels, which were installed over Sharkskin High-Temp Ice and Water Shield and the wood deck. “On the fitness center, we rolled all metal on site,” Pickel says. “There were multiple trips for metal for each building, but the nice thing with the Fitness Center was it was pretty straightforward. We just ran the panels out to length and installed them. Later we came back and installed the awnings on the first floor as well, using the same metal.”

The Swim Center also featured a TPO roof where the HVAC units were installed, as well as a large metal roof. “The indoor pool was fun,” Pickel says. “The TPO section was similar to the Fitness Center — tight space, low parapet — but even smaller. There was a lot of detail work for such a small area. The difference was that the roof was structurally sloped from front to back, so we didn’t have to install tapered insulation.”

Pool buildings have crucial considerations, notes Pickel. “When you are dealing with a pool —an indoor pool especially — you’ve got different concerns that you’re worried about, including condensation and chlorination. We’re thinking through all of those items when we are talking with the GC to minimize any issues with condensation in the future.”

Consultations with the architect and waterproofing contractor were designed to ensure the structure could handle high levels of moisture. “A lot of it was making sure everyone understood what was going on below the deck,” Pickel explains. “We had to make sure they were waterproofing the interior — the understructure of the facility. From a roofing standpoint, you don’t want water to seep up through the ceiling and cause issues with the underside of the panels. We had to make sure the facility was good and watertight both inside and outside.”

After the TPO section was completed, crews moved on to the metal roof. “The metal panels were 110 feet long,” Pickel says. “We ran one panel all the way down because we didn’t want any breaks. It was only one story high, but getting those panels up to the roof without bending or scratching them was a challenge.”

Ultimately crews implemented a three-man pulley system to lift the panels to the roof. “We moved one long panel at a time, nice and slow,” he says. “We had three or four guys up top to maneuver the panels into position. It’s not fun carrying a 110-foot panels about 90 feet  from one end to the other, but you do what you’ve got to do.”

Texas Traditions also installed a TPO roof on the Comfort Center (an outdoor restroom) and metal roofs on the open pool cabanas. “The cabanas were added afterwards,” says Pickel. “They originally wanted those roofs to be made from corrugated panels, but we told them it would look better if they went with the same panel all of the way across the board. They agreed and went with the 1 1/2-inch mechanical lock panels and half-round gutters to go with them to give it a clean, professional look.”

Crews also roofed the covered walkway with translucent KODA XT polycarbonate panels. “It was something we hadn’t done before, which was kind of fun,” Pickel says. “It’s an engineered panel — fully custom.”

Since it was the company’s first experience with the system, the manufacturer was on site to provide training and answer questions throughout the process. “There was good communication through and through with the manufacturer,” notes Pickel.

Work didn’t stop at the roof. Texas Traditions also installed Corten A606 wall panels in Rust color on the Swim Center and Fitness Center. The panels were custom fabricated at the jobsite. “We actually made those out of flat sheets and bent everything on site. They were about 3 feet wide and 4 or 5 feet long. We literally cut a sheet, bent it up, cut the sides, and installed the panels. Each panel interlocked and interconnected.”

Texas Traditions is proud of its multifaceted work at Kissing Tree. “This project showcases what we are able to do,” Pickel says. “We handled multiple aspects of the project, from TPO, to metal roofs, to wall panels, to walkways. Our crews have the ability to tackle everything from a standard, cut-and-dried residential or commercial replacement, all the way to cut-up, detailed, custom metal roofs and metal wall panels.”

Challenges such as working with other trades and a shifting schedule are all part of any new construction project. “You’ve got to be able to cope with delays and last-minute changes,” Pickel says. “You just have to be willing to work with other people. Some roofers don’t like to do that, but it’s the nature of the beast. If you want to do new construction, you have to work as a team. At the same time, you’ve got to own your section, own your responsibilities. You can make other guys’ lives easier, or you can make them way more difficult. You want to be a contractor that is good to work with from the GC’s standpoint, and also good to work with from the standpoint of other trades.”

GAF Showcases Innovations for Commercial and Residential Contractors at IRE