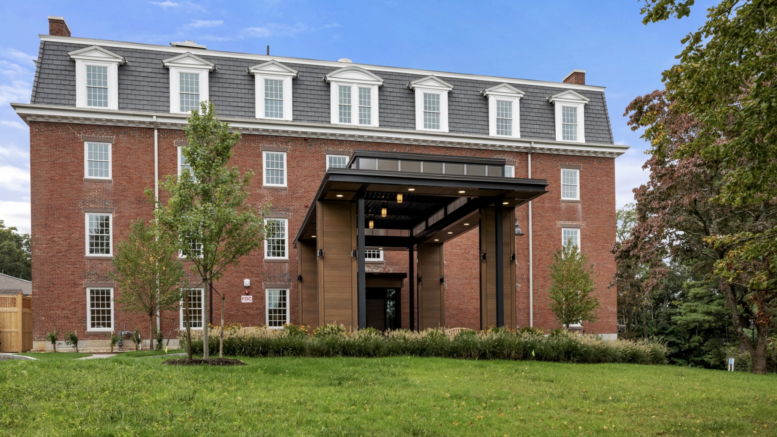 Located on the former campus of Andover Newton Theological Seminary in Newton, Massachusetts, the Benchmark development is an adaptive re-use project. The 20,000-square foot building once served as the oldest graduate school in the nation. It now houses Adelaide’s main operations. Right next door is another 35,000-square-foot building. The new circular pattern structure serves as the main residence for up to 61 residents with Alzheimer’s or dementia.

“The DaVinci product was used on the old building to replace existing slate,” says David Griffin with Erland Construction. “The John Henry Roofing team did an amazing job with the installation. It looks very authentic.”

For this project, the John Henry team began by installing Grace Ice and Water Shield on the mansard areas. Next the DaVinci slate product was installed. Then zinc-coated copper drip edges, valleys, and flashings were installed. The overall project took the roofing team two months to complete.

“I initially recommended the DaVinci product to the general contractor and owner,” says James Madden with John Henry Roofing. “We have previously installed the product on other projects. It looks great. Very realistic. That was a key factor in the product’s selection for Adelaide. The synthetic slate looks so beautiful atop the old brick building that I imagine this is exactly what the structure looked like in the 1800s.”