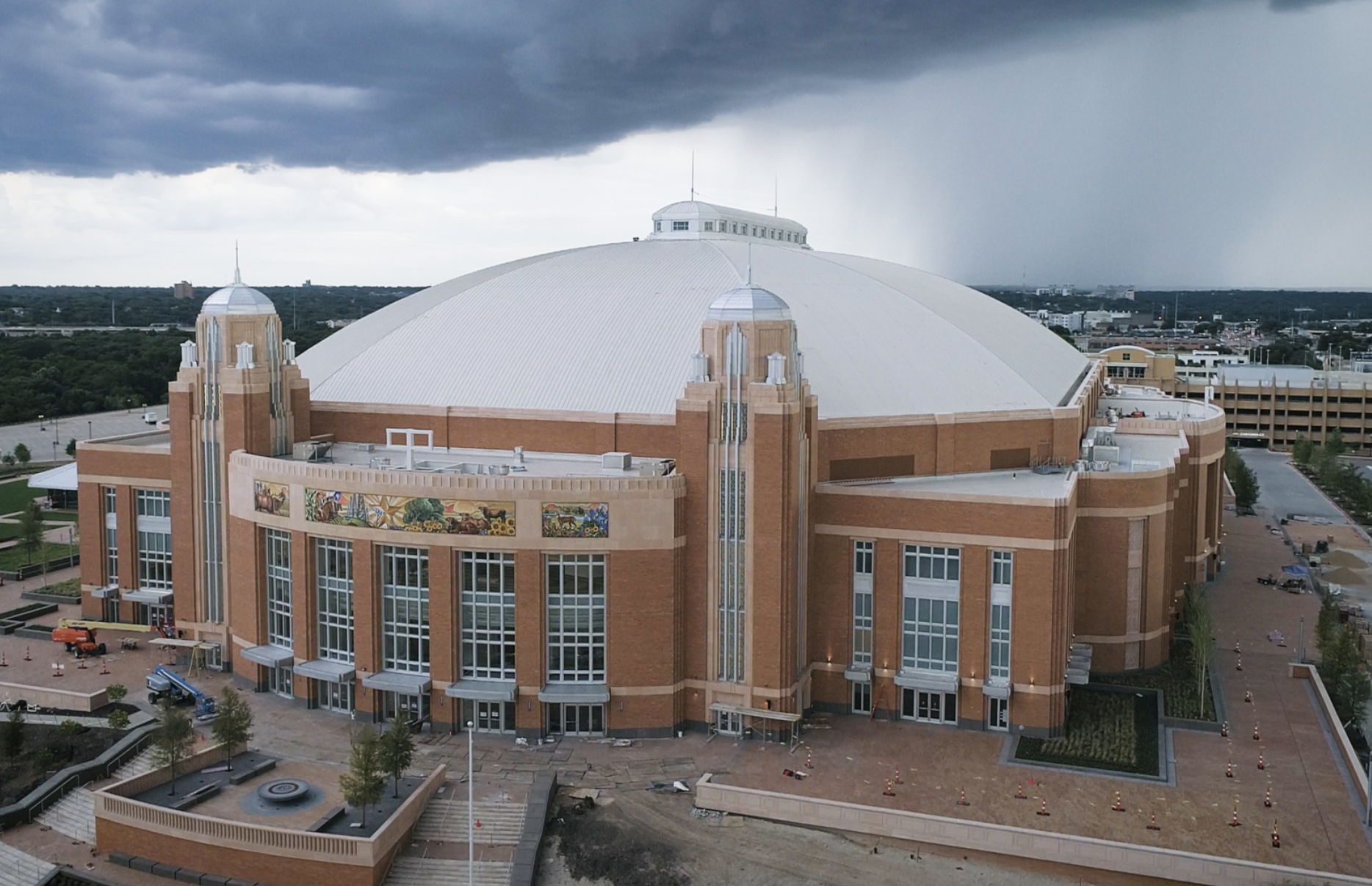 The new Dickies Arena in Fort Worth, Texas, was designed to echo the iconic Will Rogers Memorial Center, a historic landmark built in 1934. The site of the Fort Worth Stock Show and Rodeo as well as other concerts and sporting events, Dickies Arena was designed to provide a modern entertainment experience and configurable event spaces that would stand the test of time. The multiple roof systems on the project — including the plaza deck surrounding the arena — were essential in delivering on these goals.

Dickies Arena features a domed main roof with a cupola at the top that pays homage to its historic neighbor. “One of the major themes, especially of the dome roof structure itself, was to have a kind of throwback to the original Will Rogers Center, which is still there,” says Eric Nelson, AIA, RID, CCCA, vice president at HKS, the architect of record for Dickies Arena. “The Will Rogers Center was one of the first buildings of its type to have a long-span steel truss roof system. We used that existing structure as the inspiration for the roof structure inside the arena. We have these very thin, elegant looking trusses that are very art deco.”

The new structure’s domed roof is surrounded by low-slope roofs and complemented by two towers topped with metal roofs. Dickies Arena also features a pavilion with a standing seam metal roof, which sits on a plaza deck that serves as an outdoor event space as well as a giant roof system covering exhibit space and areas for housing rodeo livestock. The venue is also designed to provide excellent acoustics for concerts and features luxurious millwork and finishes throughout to provide a touch of elegance. “I like to say that it’s a rodeo arena, but it’s designed like an opera house,” Nelson says.

It took an experienced team of design and construction professionals to envision and execute the project, including HKS, the architect of record; David M. Schwartz Architects, the design architect; The Beck Group, the general contractor; Jeff Eubank Roofing Co., Inc., the roof system installer; and Sunbelt Building Services LLC, the insulation distributor and installer of the plaza deck.

The roof system specified for the dome featured an 80-mil PVC system with decorative ribs manufactured by Sika Sarnafil. “The roof system is one that we use pretty regularly on our large sports projects, the Feltback PVC,” notes Nelson. “It’s a lot more durable than other single-ply roof membranes, so we really like it a lot. Dickies Arena is an arena that wasn’t just built for the next 20 years; it’s meant to be there for the next 100 years, so we wanted to make sure we used nothing but the highest-quality materials, especially with all of the hailstorms that we can get out there in Fort Worth.”

The roof system installer, Jeff Eubank Roofing Co., Inc. of Fort Worth, Texas, tackled the dome roof first, followed by the low-slope sections and the metal roofs. Work on the dome roof began in July of 2018. “The project progressed pretty quickly,” says Jeff Eubank, vice president of Jeff Eubank Roofing Co. “The dome in and of itself was like two different projects. The top half of the dome is pretty workable and walkable, and the bottom 40 percent of the dome is almost vertical.”

Eubank and a structural engineer worked with Epic Deck to construct anchor points that would meet requirements for fall arrest. The half-inch aluminum, F-shaped anchors were designed to rest in the flutes of the acoustical deck and featured a ring provide a tie-off point. They were set in place using a crane.

Safety concerns included the Texas weather. “Our biggest challenge came with the heat,” says Eubank. “Summers in North Texas are brutal enough, but at the end of last summer, a high pressure system just stalled over Fort Worth. We were in the middle of a drought, with temperatures up to 110 degrees. You’re up on a deck with nowhere to hide, and with it was pushing 200 degrees up there. From a life safety standpoint, we ended up pushing the dome installation to night work.”

Crews applied approximately 250,000 square feet of material on a near vertical application at night, with lighting provided by six tower cranes. The project required 100 percent tie-off of men and equipment.

The original plan for the dome was to work top to bottom, but as work began, the cupola was incomplete, so the safety and logistical plans had to be radically changed. “We ended up basically making two rings around the dome, doing the near-vertical portion — the bottom 30 or 40 percent — first,” Eubank says. “We moved up and did another 360-degree loop around the top half of the dome once the cupola was done.”

The roof system was installed over the acoustical deck and loose-laid filler. After a 5/8-inch DensDeck Prime substrate board was installed, crews mechanically fastened two layers of Sarnatherm polyiso and 1/4-inch DensDeck Prime. They adhered the Sarnafil G-410 20 Feltback membrane, which was produced in a custom color called Agreeable Gray.

After the membrane was installed, the PVC ribs were heat welded into place to give it the look of a standing seam roof. “We installed over 16 miles of custom-color Decor ribbing,” notes Eubank.

The Logo on the Roof

The dome roof also prominently features the Dickies Arena logo, which took some advance planning. “We left an area of the ribs out on the east side anticipating the logo up there,” Eubank says. “That’s in another custom color. Sarnafil ran the custom color and templated the letters. The logo is roughly 130 feet by 10 feet, so we received a giant D, a giant I, a giant C, and so forth. Once these things are installed, there is no pulling them up — your only option is to tear the roof off. So, imagine working with a 10-foot letter, 200 feet up in the air, on a slope, and making sure it’s level.”

Eubank Roofing came up with a plan to use a section of 60-mil PVC membrane as a backer sheet. “We laid out this big backer sheet in Agreeable Gray and stenciled all of the letters across it,” Eubank explains. “We took the backer sheet up, got it lasered and leveled, and installed the solid backer sheet on the dome. It already had the stencils on it, so we were able fall back and install the individual letters. We didn’t need to line them up — we just had to fill in the blanks.”

The last steps in the dome installation included installing ribs in a second custom color to go through the letters. Helicopters also brought in three large Dickies signs, which were placed atop concrete pedestals treated with a Sarnafil liquid membrane.

On the low-slope sections that surround the dome, the Sarnafil G-410 Feltback was installed over structural concrete and fully tapered polyiso. “There is a tremendous amount of masonry work on this project, and it is gorgeous,” Eubank notes. “It was important, though, on the low-slope portions to let the brick work and stone work wrap up before any roofing membranes were installed.”

A vapor barrier was installed over the structural concrete deck. After masonry work was completed, crews installed a fully tapered polyiso system in ribbons of OM Board adhesive, then adhered 1/4-inch DensDeck Prime and the 80-mil PVC membrane.

The complex also features two different metal roof systems from Fabral. On the north side of the building, the two towers were capped with a flat-seam panel. Down at the plaza level, the pavilion was topped with a double-lock standing seam roof system featuring Fabral 24-gauge Galvalume Power Seam panels.

According to Nelson, an area underneath the pavilion serves as a warm-up arena for horses during the rodeo, so the design was meant to evoke a rustic effect. “The cladding on that building is all quarter-inch steel with rivets on it,” Nelson points out. “Galvalume is finished to look like galvanized sheet steel, but it won’t tarnish or turn white or black like galvanized steel would — which is why they selected it — but it still has that kind of throwback look of a barn.”

Out of the Gate

Dickies Arena is now open to the public and is gearing up to host its first rodeo. The experienced team that built it has moved on to other projects, but they look back on their work on the new landmark venue with pride.

“I’m very proud of the people that I work with and the thought and care that they put into the project and the time that we take,” Eubank says. “A lot of our work is negotiated re-roofing, and I think that’s in large part because we take the time to think through a problem and come up with the best solution. I think that’s really highlighted here. You’ve got to take your time and do it right — and do it efficiently.”

Eubank commends the general contractor, H.C. Beck, for a smoothly operating jobsite. “The job was very well managed from a safety standpoint,” Eubank says. “The general contractor did a fabulous job of manipulating trade work and making sure no one was working overtop of anyone else.”

Nelson agrees, crediting the teamwork at every phase of the project for the successful outcome. “The partnership with David M. Schwartz as the design architect really worked very smoothly from our side,” Nelson says. “We worked very well with a talented team of consultants and who specialize in sports design. It’s a one-of-a-kind type of project.”

“My family has been in Fort Worth for five generations, and this is a project I’m just tickled to death about for the city,” says Eubank. “To be part of its install means a lot.”