If you want it done right, do it yourself. Company owners Todd Westby and Tim Westby take a hands-on approach to running TurnKey Corrections, the River Falls, Wisconsin-based company that provides commissary and jail management services to county corrections facilities nationwide. The Westby brothers also take pride in the fact that TurnKey manufactures the kiosks it provides to its clients and develops and owns the proprietary software used to run them.

So, it’s perhaps not surprising that, when building the company’s new headquarters, Todd Westby, the company’s CEO, founder and general manager, served as the general contractor. Or that he had definite ideas regarding the roofing system that would be installed. Or that he was more than willing to get his hands dirty during the installation process.

Founded in 1998, TurnKey Corrections helps corrections facilities streamline and lower the cost of delivering a variety services to inmates, including commissary, email and email-to-text communication, video visitation, law library access, and paperless intra-facility communication and documentation. Following several years of robust growth, the company had outgrown its three existing buildings. So, it constructed a new 115,000-square-foot facility to bring all operations, including 50,000 square feet of office space and a 65,000 square-foot warehouse where commissary items are stored prior to shipment to corrections facilities, under a single roof and accommodate future success.

“We wanted to be involved in the project from beginning to end so we knew what we were getting and how it was built,” Todd Westby says of the decision to keep construction management in-house. “We wanted to know about anything and everything that was being built for the company in this building.”

In planning the project, Westby initially set two key criteria for the roofing system: that the building would be made watertight as quickly as possible so concrete slab pours and other interior work could be completed, and that the roof would be covered by a warranty of at least 20 years. The design-build firm’s initial plans called for a ballasted EPDM roofing system, but Rex Greenwald, president of roofing contractor TEREX Roofing & Sheet Metal LLC of Minneapolis, suggested a white TPO system, noting that it would meet the quick installation and warranty goals while also enhancing the building’s energy efficiency. Westby was intrigued and, after some research, agreed to the recommendation. In addition to helping reduce cooling costs during summer months, the reflective surface would allow a blanket of snow to remain on the roof during winter months to provide additional insulation. 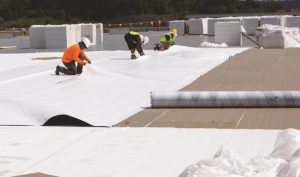 The TPO roofing system was constructed over a 22-gauge metal fabricated roof deck.

The TPO roofing system included a 22-gauge metal fabricated roof deck; two 2.5-inch-thick layers of Poly ISO insulation from Mule-Hide Products Co., with tapered insulation saddles and crickets to aid drainage; and 811 squares of 60-mil white TPO membrane from Mule-Hide Products Co. The insulation and membrane were mechanically attached using the RhinoBond System from OMG Roofing Products. Cast iron roof drains, designed and installed by a plumber, were used rather than scuppers and downspouts—a practice that the TEREX team strongly recommends to prevent freezing during the cold Upper Midwest winters. Walkways lead to the mechanical units, protecting the membrane from damage when maintenance personnel need to access the equipment.

The TEREX team finds the RhinoBond System to be the most efficient and economical attachment method for TPO systems. Specially coated metal plates are used to fasten the insulation to the roof deck and then an electromagnetic welder is used to attach the membrane to the plates. The membrane is not penetrated, eliminating a potential entry point for moisture. And while other mechanical attachment methods require the crew to seam as they go, the RhinoBond System allows them to lay the entire membrane (a task which must be completed in good weather conditions) at once and go back later to induction weld the seams and plates, which can be done when Mother Nature is slightly less cooperative.

Greenwald estimates that the switch from the originally specified ballasted EPDM system to the TPO roofing system and RhinoBond System shaved at least 10 percent off the installation time and reduced the roof weight by 10 pounds per square foot.

Having Westby on-site as the general contractor also sped up the project considerably, Greenwald notes. “He was a huge asset to all of the subcontractors,” he explains. “We could get construction questions answered quickly and could talk through issues and procedures on a timely basis.”

And the most memorable moment in the project for Greenwald was seeing Westby working side-by-side with his crew. “One day we had a delivery truck show up, and Todd jumped on the forklift and helped us unload the truck.”

As sought from the project’s outset, the roofing system is backed by a 20-year, no-dollar-limit labor and material warranty.

With one winter of use in the rearview mirror, the roofing system has exceeded Westby’s expectations. Warehouse space was doubled, but heating costs have been cut in half. The 10-unit heating system also is able to keep the warehouse a uniform temperature, without the cold spots that were common in the old building.

“It really is a beautiful, very efficient and organized-looking roof,” Greenwald says.