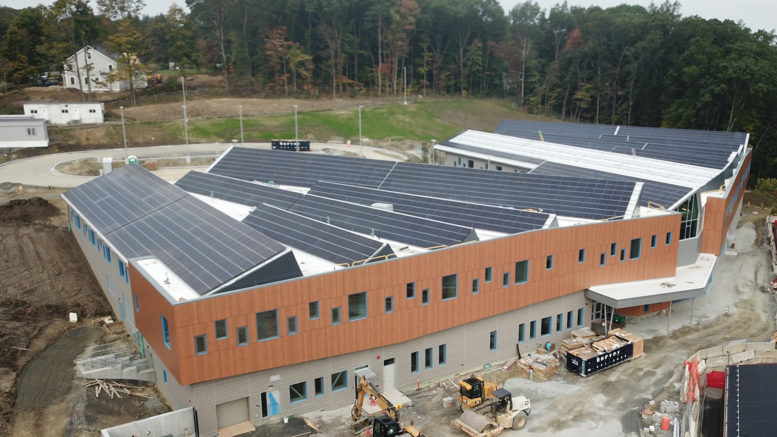 The hallmarks of excellent elementary school education are reading, writing and arithmetic, and the Annie E. Fales Elementary School in Westborough, Massachusetts, is one of the best, ranked in the top 20% for overall test scores among nearly 1,700 public schools in the Commonwealth. With its newly built, net zero-designed facility, the school has earned an A+ not only for the quality of education, but also for its impact on the environment.

Designed by HMFH Architects of Cambridge Massachusetts, which specializes in educational facility design, the new school is setting a precedent for energy-efficient design in educational facilities as the first net-positive energy public school in Massachusetts. In addition, the project has been recognized by Sika Sarnafil as a “2021 Project of the Year” in the Sustainability category for the outstanding roof installation by an approved contractor.

Caitlin Osepchuk, AIA, HMFH Associate, says, “the town of Westborough has a goal of becoming carbon-emissions free by 2035, so the entire facility — from its site on the side of a hill, and geothermal heating and cooling system, to its centralized energy management system designed to use one-third of the energy typically used in a school of this size, highly efficient curtain wall system, LED lighting, triple glazed windows, and its unique roof structure — was designed to minimize impact on the environment.”

One of the unique aspects of the building is its 58,000-square-foot roof, featuring 11 different raised sawtooth profiles. Each one designed to both optimize the amount of natural daylighting in the classrooms, and to provide the best orientation for the building’s solar array, according to Osepchuk.

The roofing system, installed by Capeway Roofing Systems, Inc., of Westport, Massachusetts, one of Sika Sarnafil’s Elite Partners Club contractors, includes a 22-gauge metal deck, vapor barrier, two layers of 2.6-inch polyisocyanurate insulation, and a layer of tapered insulation over the top for positive drainage, all mechanically attached to the deck. A half-inch coverboard is fully adhered over the top, using a two-part polyurethane adhesive. The waterproofing layer is reflective gray 60-mil Sarnafil PVC membrane with an adhesive backing on the sloped portions of the roof, and 60-mil white PVC membrane on the flat sections. The membrane comes in 6.5-foot wide by 90-foot-long rolls and has a 3-inch overlap on the seams.

Michael Correia, project manager for Capeway Roofing, notes, “We use lots of the peel and stick membrane, it’s a good time saver for us since you just lay it down and roll it in, and it’s easy to work with. Our guys really like it.”

“We use a 100-pound roller on the membrane, which is generally pretty easy on flat roof sections, but on this project, particularly on the sawtooth slopes, it was very difficult,” Correia continues. “After we’d apply the membrane, they would roll it from the top of the slope down, and then pull the roller back up with a rope, move it over, and roll the next section. It was a real work out for them, and our guys had dead arms by the end!”

In addition, the facility has over 1,350 solar modules, capable of producing 507.75 kw of electricity, says Stephen Coffrin, senior project engineer with Solar Design Associates of Harvard, Massachusetts. The solar panels are installed on an Iron Ridge rail system and secured to the deck with OMG PowerGrip Universal 7 roof mounts.

The REC solar modules are rated at 3.1 W per cell and offer a 21.4% efficiency rating. The panels feature “half-cut cell technology” to increase their energy output. Half cut modules are designed so the top and bottom half of each panel operates independently for maximum output.

The 11 sawtooth profiles range in overall length from 65 to 187 feet long, with slopes on the southern or solar panel side ranging from 21 degrees to 30 degrees, and slopes on the northern side for daylighting ranging from 54 degrees to vertical. The individual sawtooth heights from the roof deck to the peak range from 7 to 12 feet.

In addition to the membrane installation, the crew from Capeway was also responsible for installing nearly 1,600 solar roof mounts made by OMG Roofing Products.

The universal roof mounts can be used on any type of commercial roofing system and offer superb strength to resist tensile, shear, compressive and moment forces. The screws become load-bearing columns which work in both tension and compression, making them ideal for managing moment forces created by gravity and snow loads on a sloped roof. Additionally, it is the only roof mount on the market with two separate, independently functioning water blocking systems designed to maximize for long-term performance.

The roof mounts were specified by Solar Design Associates and accepted by Sika Sarnafil.

“The roof mounts are our ‘go to’ product for securing solar racking systems,” Coffrin says. “They have been the basis of design for us for several years, and we’ve used them very successfully on several projects, and they’ve always performed well.”

“The product is designed with redundant barriers in the base plate and the top plate and then secured directly to the deck,” says Coffrin “For this project, the mounts were specified as they are ideal for the sawtooth application and offer the best strength and the best chance for the roof to remain watertight.”

To ensure that each of the 1,600 solar roof mounts was located properly on the sawtooth structures, Capeway worked with Coffrin’s team. Once the roofing membrane was installed, Solar Design Associates came back to the jobsite and snapped horizontal and vertical lines to precisely indicate where each solar mount unit was to be installed.

“Installation of the 1,600 units went faster than anticipated,” says Correia. “We had two crew members installing them, and we were impressed with the productivity we got. We’ve installed other solar mounts in the past, but this was our first time with those specific units, and we liked the fact that there is nothing to heat weld, which made the installation much more productive than we originally anticipated. It also allowed the solar installation to start a bit early.”

The original goal for the Annie E. Fales Elementary School was to build a net-zero energy facility. Based on the early data collected, it is now fully expected that the facility will actually be net-positive energy by the end of the first year, using less energy than it generates, and earning the highest marks on its first-year report card thanks to the great work by all involved.