Municipal storm-water managers historically have focused on controlling runoff from ground-level impervious surfaces, such as roadways, sidewalks and parking areas. However, the next frontier in storm-water management is rooftops. In urban storm-water management, roofs are part of the problem and potential solution. An exciting new technology to control rooftop runoff is known as blue roofs. Over the next several years, New York City alone will spend several billion dollars on green infrastructure solutions to address its storm-water-control problem, and blue roofs will be a key part of these efforts. 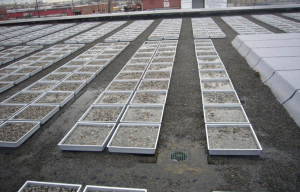 Blue-roof trays are held in place with stone ballast and hold up to 2 inches of water. The tray systems resulted in a 45 percent reduction in roof runoff during rainfall events in a New York pilot project.

The roofing industry has become very familiar with the use of vegetated, or green, roofs. The vegetative layer grown on a rooftop provides shade and removes heat from the air through evapotranspiration, ultimately reducing temperatures of the roof surface and the surrounding air. By reducing the heat-island effect, these buildings require less energy to cool in the summer and use fewer natural resources (oil or other fuel) in the process.

However, an even newer and less-well-known sustainable technology applicable to roofs is the blue roof. A blue roof temporarily stores rainwater in any of a number of types of detention systems on the roof. They are most applicable and provide the most benefit in highly urbanized cities that are serviced by combined sewers. Combined sewers handle sewage and rainwater runoff from roofs, streets and other impervious surfaces. On dry days, these combined sewers can easily handle the amount of sewage flowing through them to the local treatment plant. However, on days with heavy rain, these combined systems can easily overflow with rainwater and raw, untreated sewage. This combined sewer overflow, or CSO, can flow into local sensitive receptors, like streams, ponds and oceans, contaminating the natural resources and killing fish and other wildlife dependent on them.

The beauty of blue roofs is they can store much of this rainwater during and immediately after a rainstorm, temporarily preventing it from reaching the sewer system. In this way, CSOs are minimized and local natural resources are protected. When the storm is over and the sewer system has the capacity to handle it, the blue-roof retention materials are designed to slowly release the stored rainwater back into the storm-drain system. 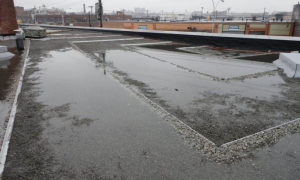 Our firm, Geosyntec Consultants, along with environmental engineers Hazen and Sawyer and HydroQual and water-management firm Biohabitats, designed and implemented a groundbreaking blue-roof system in New York. The New York City Department of Environmental Protection (NYCDEP) retained the team to implement a sustainable green infrastructure retrofit pilot program to demonstrate how rooftops can reduce the frequency and volume of CSOs in the city. The objective was to design and install storm-water controls to quantify the benefits of sustainable approaches as a viable solution to reduce storm-water flows to the city’s CSO system. Rainfall of less than 1/2 inch can overload the system and result in untreated discharges. The use of sustainable green infrastructure, like blue roofs, to reduce storm-water inputs to the combined system is one of many approaches New York City is considering to help solve this problem.

Geosyntec’s role on the team was to design several storm-water pilot studies, including blue roofs. Our blue-roof designs included installing risers on rooftop outlets that would result in ponding of water around the outlets, small dams on the roof surface using check dams of angle-iron to create ponding and the most successful technique—blue-roof trays. We developed specially designed trays, held in-place with stone ballast, to hold up to 2 inches of water. The tray systems resulted in a 45 percent reduction in roof runoff during rainfall events. If blue-roof trays were installed on all roofs in an entire drainage area to a CSO, the results would be significant in solving the CSO problem. In addition, trays are more practical because they can be spaced around existing equipment on roofs and moved during repairs and maintenance of other rooftop systems.

Geosyntec Consultants designed a blue roof
that included installing risers on rooftop outlets that would result in ponding of water around the outlets.

Protecting the integrity of a roof membrane is an important consideration for roofing and building contractors that are considering installing a blue roof. Blue-roof-tray systems offer the best protection because they rest on top of existing membranes and ballast systems and do not result in any membrane perforations that require additional waterproofing. Other blue-roof systems, like check dams or new drain inserts, may require additional waterproofing. The bottom line is if the roof membrane is old, compromised or currently leaking, any type of blue roof would be problematic until a new membrane is installed.

In addition, during the pilot projects, we took great care to inspect and test the roofs for load-bearing support—a step that should be conducted for all blue and green roof systems.

As we look to the future, roofs in urban areas will most definitely become a major part of the storm-water solution, and blue-roof technologies will evolve to become a common practice.

NYCDEP has posted information about blue roofs and other urban green infrastructure for CSO control on its website.
The U.S. Green Building Council offers an online course about blue roofs for storm-water management.

A Little Piece of the Planet

3 Comments on "From Green to Blue: Making Roof Systems Sustainable in Urban Environments"