Years ago, reroofing design involved removing all roof-system components down to the roof deck and rebuilding a new roof system up from there. 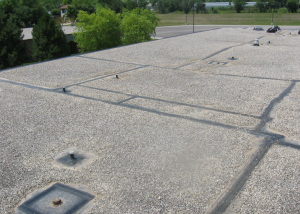 PHOTO 1: This EPDM roof’s service has been extended for nine years and counting, approaching 30 years in-situ performance. Here, the restoration of perimeter gravel- stop flashing and lap seams, as well as detailing of roof drains, penetrations and roof curbs, is nearing completion.

When I first moved into roof-system replacement design some 35 years ago, the dominant roof systems being removed were bituminous, specifically gravel-surfaced asphaltic and coal- tar-pitch built-up roofs. As they aged, their surfaces often started to blister, crack and undulate with ridges—surfaces often unsuitable for roof recover. The bitumen often was deteriorating because of ultraviolet-light exposure; when that occurred, the deterioration of the felts was not far behind. The insulation was mostly perlite or high-density wood fiber; the amount was minimal (low thermal value) and, more often than not, flat or with very minimal slope. Drains were erratically placed, tapered insulation was not often the case and roof edges were predominately gravel stops. In the Midwest, many roof decks were cementitious wood fiber. The roof covers were often patched again and again, even as water infiltrated the system. 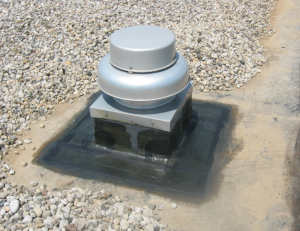 PHOTO 2: The re-flashing of roof curbs is an integral part of the restoration of EPDM roof membranes.

When replacement was necessary, the roof-edge sheet metal was removed; the entire existing roof system was removed down to the roof deck; and a new roof system was designed, often incorporating vapor retarders/temporary roofs so the removal of multiple layers of roofing could be accomplished, roof curbs raised, and enhancements of roof drains, curbs and roof edge could occur prior to the installation of the new roof cover. Tapered insulation designs be- came common; this would often require realignment of the roof drains to simplify the tapered design and installation. To accommodate the new insulation thickness, the roof edge had to be raised as did roof curbs, RTU curbs, plumbing vents and roof drains via extensions. Roof membranes changed from bituminous to those classified as “single plies”: EPDM, PVC, CPE, CSPE.

These new roof-system replacement designs resulted in superior roofs—85 percent of all the reroofs I have designed are still in place, still performing, still saving the owner money. Life cycles have moved from eight to 12 years, up to 18 to 25 years and longer. They certainly were more expensive than the original installation and, if a roof designer didn’t have a handle on costs to provide the owner with estimated costs of construction, were often shocking. But these roof systems were good for the client, economy, environment and public. 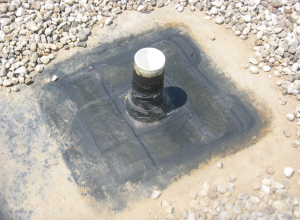 PHOTO 3: When restoring EPDM roof membranes, the removal of roof penetration flashings and installation of new with target patches will provide another 20 years of watertight protection.

Over the years, codes and standards have changed, especially in the past decade, requiring increased insulation values and roof-edge sheet-metal compliance with greater attention to wind-uplift resistance. As the new millennium arrived, these “new age” roofs came of age and owners started to look at their replacement—often with increased costs stifling their budgets.

A factor that increased the performance of many roof systems in the past 20 years was the emergence and growth of the professional roof consultant, often degreed in architecture or engineering, educated in roofing, tested and certified. These professionals brought a scientific approach to roof-system design. Raleigh, N.C.-based RCI Inc. (formerly Roof Consultants Institute) was the conduit for this increased level of knowledge, professionalism and the growth in quality roof-system design and installation. 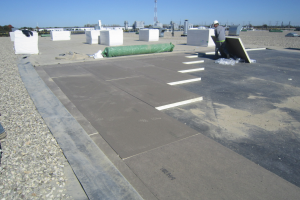 PHOTO 4: On this roof, the existing loose-laid membrane was removed, open insulation joints filled with spray-foam insulation and new insulation added to meet current code requirements. A new 90-mil EPDM membrane was installed and existing ballast moved onto it to 10-pounds-per-square-foot coverage.

As these professionals started to examine the older “new age” roofs, those whose first responsibility was doing what was best for the client saw greater opportunity than just a costly full-roof replacement. Although many roofs today still need to be fully removed, prudent professionals see other opportunities, such as the following:

Be the first to comment on "With Today’s ‘New Age’ Roofs, Removing All System Components May Not Always Be Required or in the Clients’ Best Interest"