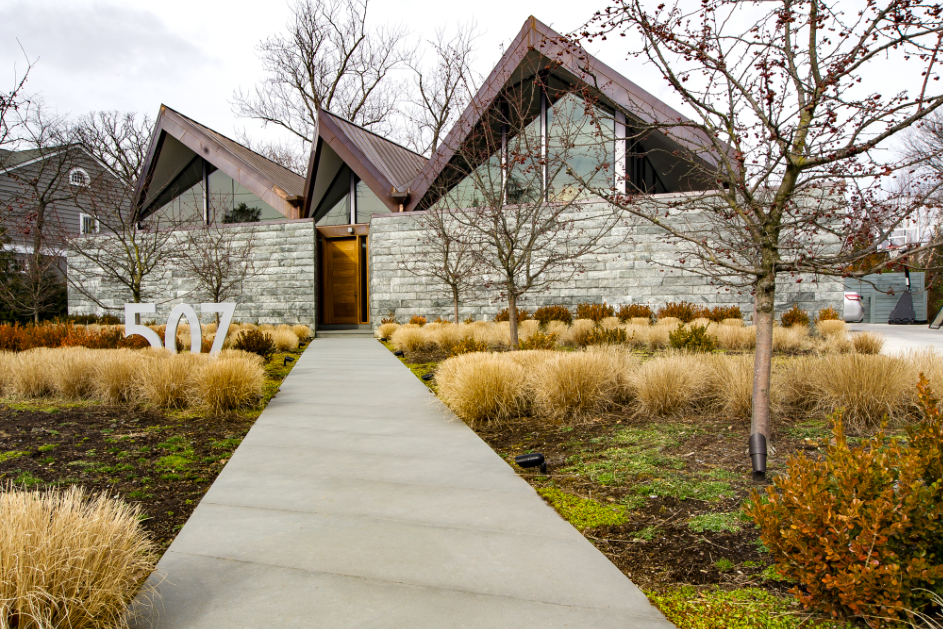 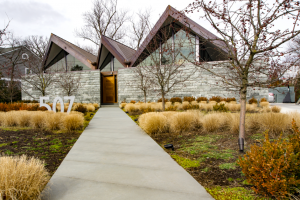 “We like the tough jobs,” says Dean Jagusch, president and owner of Wagner Roofing Company. “We like the intricate jobs.”

Headquartered in Hyattsville, Md., Wagner Roofing has served the Washington area market for more than a century. “We specialize in historic restoration and innovative architectural roofing and sheet metal,” Jagusch notes. “We’re full service. We do slate, copper, tile, and have a low-slope commercial division as well. But our trophy stuff tends to be of the steep-slope variety.”

It’s easy to see why. The origami-inspired design features multiple roof angles, but the daring design was problematic. Even though the home was relatively new, the owners were plagued by leaks. Along with Restoration Engineering Inc. of Fairfax, Va., Wagner Roofing was called in to consult on the project, determine the source of the leaks, and come up with a solution.

The original galvalume standing seam roof channeled the water into a large, stainless steel internal gutter with roof drains. Jagusch found that the leaks were occurring at two types of critical points. First, there were leaks where the internal roof drains met the central gutter. The other problem spots were along the pitch transitions.

Jagusch felt that installing a conventional-style painted galvalume roofing system in those spots was almost impossible. “We felt that was since it was an area that was failing, we wanted a metal we could work with when we met a transition and turn the panels vertical where we needed to without having to break them and rely on rivets and caulk,” he says. 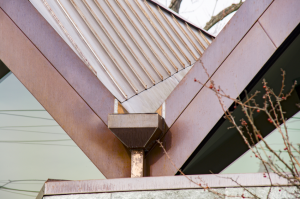 Custom five-sided downspouts were fabricated, but large windows at the back of the home offered few options for support. The downspouts were attached up under the framing system. Photos: Landmarks Photography—Jay Stearns

Copper was the answer. “The detailing was pretty tough to do, so we recommended changing it to copper so we could work with it, be able to solder and have a more seamless roofing assembly,” Jagusch recalls.

Another key to the project was redesigning how the roof drained. “We decided to push all the water to the exterior,” he says. “We collaborated with Restoration Engineering and we fleshed out the original redesign.”

The team decided that installing a copper roof system with a new drainage plan would be the best way to eliminate the leaks and keep the inspiring look the homeowners desired.

“We wanted to eliminate the drains and push all the water to the exterior, so that’s why we went for the re-slope of the big central gutter,” Jagusch says. “Also, at the transitions, we wanted to make sure we were 100 percent watertight, so we used a combination of turning up panels and soldered cleats to get everything into place.”

With its intersecting planes, the roof made laying out the panels an intricate puzzle. “You also had large expanses of roofing that changed pitch throughout,” Jagusch explains. “Panels had to be laid correctly because not only does the roof slope up, but it also slopes sideways. The layout of the panels was critical from the get-go. We all looked at it and agreed that we would follow parallel to the actual trusses, which we felt was the best solution.”

The old roof system was removed and stripped down to the 3/4–inch plywood deck. “We covered the entire roof deck with Grace Ultra,” said Jagusch. “We then used a slip sheet and installed 1-inch-high, double lock, 17-inch-wide, 16-ounce copper standing seam panels.” 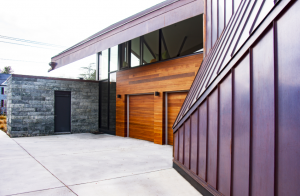 Panels were roll formed at the Wagner metal shop out of 20-inch-wide coils using an ESE roll former and trailered to the jobsite. Approximately 5,400 square feet of copper panels were installed on the project. The double-lock seams were mechanically seamed. Twenty-ounce copper flat-seamed panels were used in the large valleys.

The safety plan included full scaffolding during every phase of the project. “We have our own safety scaffolding system,” Jagusch says. “Our guys demand it on our jobs, and we demand it of them to come home safely every day. We are very proud of our safety record. It’s front of mind for us.”

In addition to the roof, all of the metal cladding was replaced on the southeast feature wall. The top of the wall was reconfigured to accommodate the new sloped valley. Where the wall met the roof, a band was fabricated to match the top part of the fascia. Other details included copper cladding for the chimney.

Drainage was redirected to the perimeter, where custom-fabricated gutters were installed. “On the west side, the roof was originally designed to dump off straight onto a rock feature on the ground, but we fashioned a custom copper box gutter about 35 or 40 feet long,” Jagusch states.

At the either end of the large internal gutter and at the end of a large valley, shop-fabricated copper conductor heads were installed. Custom five-sided downspouts were fabricated, but installing them posed another challenge, as large window areas offered few options for support. The downspouts had to be snugged up under the framing system.

“Everything had to work with the other building components,” Jagusch explains. “One of the tougher things on this project was being able to have the function and the form both top of mind, in that order. The key was to make the functional stuff look good.”

The project was completed about a year ago, and the copper has begun to change in color. “The copper now has a gorgeous bronze, kind of purplish hue to it,” notes Jagusch. “I think it will eventually develop a green patina, but with the way the environment is these days, I think it will take 15 years or so before it gets to that point. That’s the cool thing about copper—it’s a natural, breathing material that is constantly changing, constantly evolving.”

Copper cladding was installed on a feature wall, which also featured changes in slope. The top of the wall was reconfigured and a band was added to match the top part of the fascia. Photos: Landmarks Photography—Jay Stearns

Wagner Roofing has a maintenance agreement in place on the home, so Jagusch has stayed in touch with the owners and kept tabs on the project, which is performing well. “I’ve got just one hell of a team here,” he says. “It wasn’t just one estimator that went out and brought this thing in. In our business, estimating and roofing is a team sport. We kicked this thing around a lot with all divisions of the company, from estimating to operations to the actual installers before we finally settled on a number for this thing.”

“We work on some pretty spectacular places, and of course this is one of them,” he concludes. “We like a challenge, and this is the stuff that my team really loves to get their teeth into.”