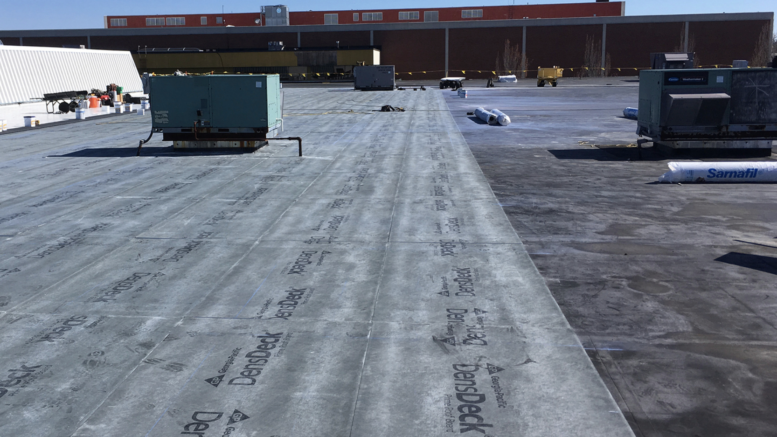 The Maine Mall in South Portland, Maine, is the largest enclosed shopping mall in Northern New England. Constructed in 1971, the mall sprawls over a million square feet of retail space with 118 stores.

When owner Brookfield Properties Retail Group decided to upgrade the mall’s aging roof, they opted for a modern photovoltaic roof that would provide renewable solar power. Solar roofing systems have steadily gained traction since Congress approved the Energy Improvement and Extension Act of 2008. The law allows building owners who install solar energy systems to deduct a portion of the cost directly from federal taxes. The law was set to expire at the end of 2016, but was renewed in late 2015, assuring that solar roofing systems will become even more common.

Challenges to the Roof Assembly

While solar roofing systems offer decreased utility bills to building owners, they put a significant strain on roof assemblies, primarily from additional foot traffic. Frequent inspections and maintenance of solar equipment increase the potential for wear and tear from greater foot traffic or damage from a worker dropping a sharp tool that could puncture the roof. Roofing consultants rank punctures as having the most negative impact on the lifespan of a roofing assembly.

Consequently, most contractors recommend — or even require — the use of a high-performance rigid cover board when installing a photovoltaic (PV) system in order to protect the roof membrane and insulation underneath. With most PV products designed for a service life of 25-30 years, the supporting roof system needs to last at least as long as the solar array itself.

“Solar roofs cost more than traditional single-ply roofs,” says Michael Gumm, applications technologist and business development manager for solar panel manufacturer MiaSolé and principal of Corporate Roof Consultants. “The additional cost of including a cover board in the project becomes almost inconsequential when designers figure in the life cycle cost benefits of extending the life of the solar roof system.”

With all of this in mind, Brookfield selected RRK Associated, Ltd., of Gurnee, Illinois, to engineer a Sika Sarnafil 60 mil PVC RhinoBondinduction welded roofing system designed to house a ballasted solar array system covering most of the 167,000 square feet of roof area being replaced. This would provide the owner with a Sika Sarnafil 20-Year NDL Warranty.

According to Guy Snowden, Jr., principal of RRK Associates, given the scope of the project, the firm knew that a high-performance rigid cover board would be required to support the equipment and withstand foot traffic from routine inspection and maintenance.

“Once it was discovered that a solar array system was planned for this location, the use of a rigid and durable cover board was never a second thought,” Snowden explained. “And since this was a re-cover application and the client had an FM review project scope, an approved cover board was required.”

Snowden has worked with a variety of roof boards over the years, but when it came to specifying a product for Maine Mall’s new roof, he felt the choice was simple.

“The heavy foot traffic the roof had already experienced combined with the installation of a solar array made DensDeck Prime Roof Board the best choice for long-term performance and durability,” Snowden says. “Other cover boards would break down or be crushed over a short period of time with the foot and equipment traffic.”

According to Snowden, DensDeck Prime Roof Board with EONIC Technology offers significant advantages over other products. “I’ve been in the roof consulting field specifying systems across the nation since 1990, and I feel DensDeck Prime Roof Board provides significant long-term performance, durability, and cost savings. Its high compressive strength is extremely beneficial, especially in applications where heavy foot traffic and equipment traffic is expected, as well as roofs in hail zones.”

Additionally, EONIC Technology has doubled DensDeck Prime Roof Board’s resistance to moisture, allowing it to meet the industry’s tough new Three-Part Specification for moisture resistance. This includes 5 percent total water absorption resistance by weight and 1-gram surface water absorption on both sides of the board.

Sarnafil Manufacturer’s Representative Ned Keating, owner of New England-based Barrier Architectural Reps, helped to choose the materials and assisted on job walks both before and during the project. “We were going over an existing roof that could have had moisture in it,” says Keating. “And since the new roof is a RhinoBondsystem, moisture could condense under the membrane, sometimes more so than when it’s adhered. This made DensDeck Prime Roof Board’s surface and total water absorption performance extremely valuable.”

RRK Associates hired Tecta America New England to install the roofing system, and 166,000 square feet of half-inch DensDeck was mechanically attached over the existing EPDM roofing system. The white 60-mil Sarnafil PVC roof system was then installed over the top.

“The existing roof had 3 to 4 inches of polyiso insulation on the deck and EPDM membrane on top of it,” explains Mark Drummond, project manager for Tecta America. “The scope of the project required us to slice the existing membrane into 10-foot-by-10-foot squares and then install the DensDeck Prime Roof Board over it.”

According to Drummond, DensDeck Prime Roof Board created an excellent substrate to add protection for the membrane and support solar panels.

“The product worked really great,” Drummond says. “Once it was installed, we were left with a nice, firm surface for the roof. Its high compressive strength and moisture resistance made it ideal for this project, especially since it was a re-cover. Most roof boards out there are rated around 100 psi, so 900 psi is really impressive. And once the winter snowstorms hit and snow gets locked in around the shaded sides of the photovoltaic panels, that moisture resistance will really count.”

Brookfield Properties Retail Group is counting on the solar panels to provide many years of reliable, renewable electricity. Thanks to DensDeck Prime Roof Board, they can also count on the roofing assembly to support the equipment, handle the foot traffic, and protect the building and its occupants for years to come.